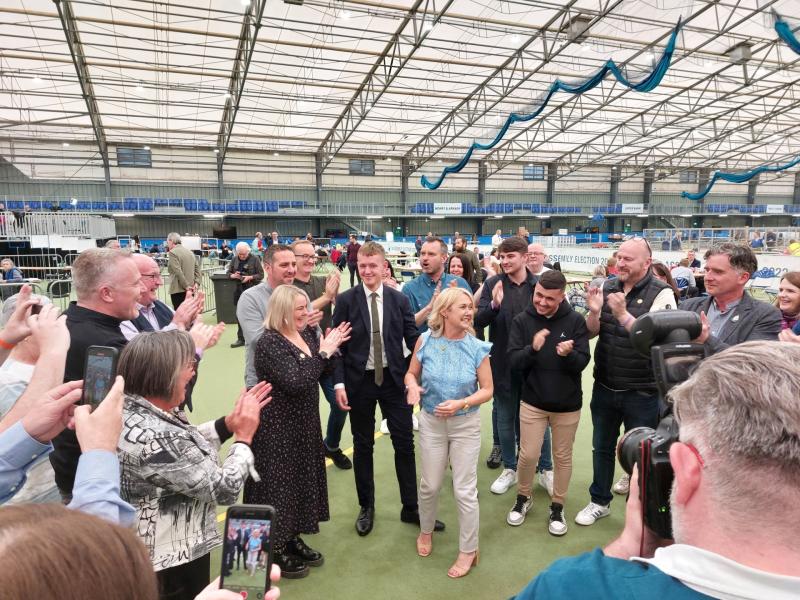 10.00am on election count day and Meadowbank Sports Arena is positively tropical.

The steady rain falling on its roof is light enough to be drowned out by the rhythmic shifting of ballot papers and excited chatter of arriving reporters, politicians and observers.

Blue power lines are being shimmied down from the gallery above as demand for sockets increases with every bright orange media wristband clipped onto an impatient arm.

Sinn Féin councillor Sean Bateson paces the hall – clipboard in hand – in search of a coffee to focus a mind overrun with nervous energy.

A 71% turnout in his native Kilrea has East Derry party activists optimistic, but that optimism is universal in the early stages of the count.

“We're polling well,” says everyone when I ask how it's going.

Current Causeway Mayor Richard Holmes carries a large bag around the hall. Not his lunch, but a mass of tallies collected for East Derry UUP candidate Darryl Wilson. 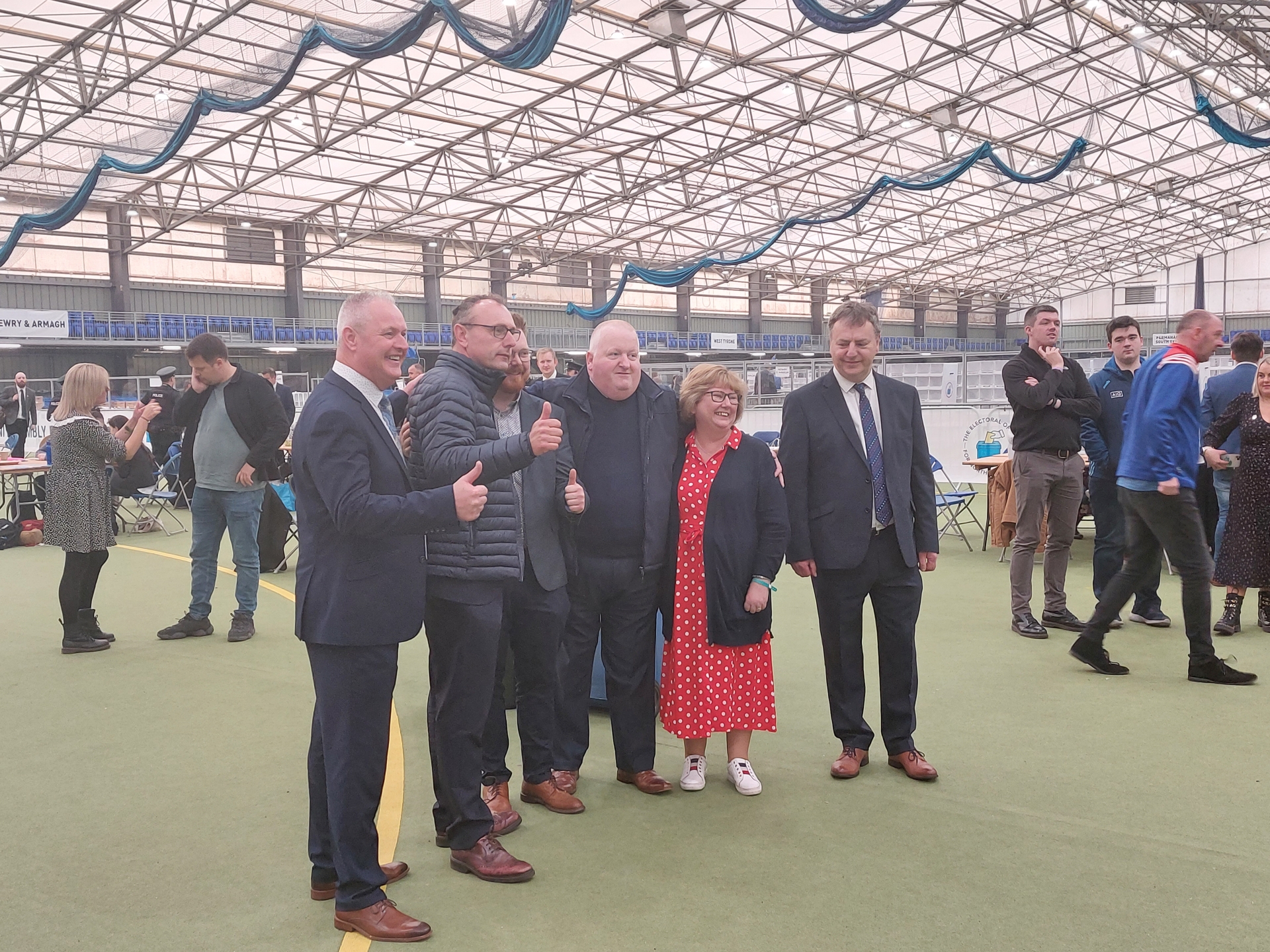 Chair of Mid Ulster District Council, Paul McLean, is in his element. He bounds around the hall, smiling, laughing, charming the count staff as they welcome people through the doors.

Across the area loosely designated for media, the parties have all claimed a table, scrambling around for chargers and chairs as they frantically analyse the early indications.

The arrival of UUP leader Doug Beattie causes a rush of cameras to the entrance of the count area. Impatient heads stare out at the scene from the windows of the cafe above us.

Police and G4S security staff keep a sharp eye on proceedings, while the artificial light that fills the hall adds to the feeling of being cast into a time warp.

A Mexican wave of journalists' arms rises and falls as they fight expletive-filled battles with intermittent and often non-existent internet coverage. 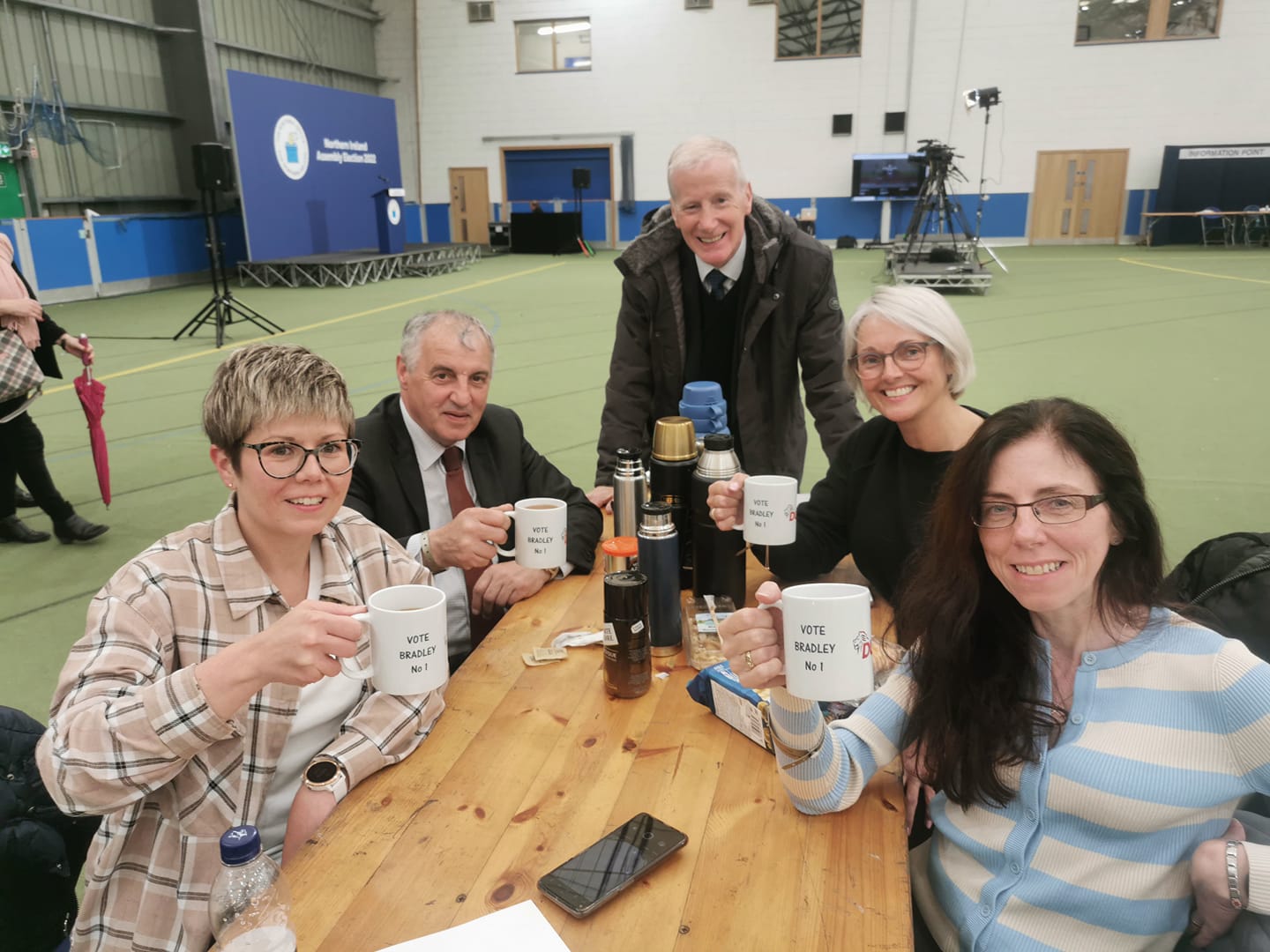 Gregory Campbell MP joins Maurice Bradley's table for a spot of tea as they wait on the count in Magherafelt.

Tables optimistically laden with tea and sandwiches soon find energy drinks, sweets and crisps strewn across them as the morning wears on.

Emma Sheerin beams after her election in Mid Ulster, before heading off to her friend's wedding in Ballybofey as afternoon slides into evening.

As count after count passes without note, the temperature plummets and it becomes clear we will be back in Magherafelt on the Saturday.

John O'Dowd cuts a solitary figure around 11.00pm, before his graveyard shift election prompts a surge of cheering Sinn Féin supporters to emerge.

We head off home, just as Newry and Armagh dig in to see out their count. 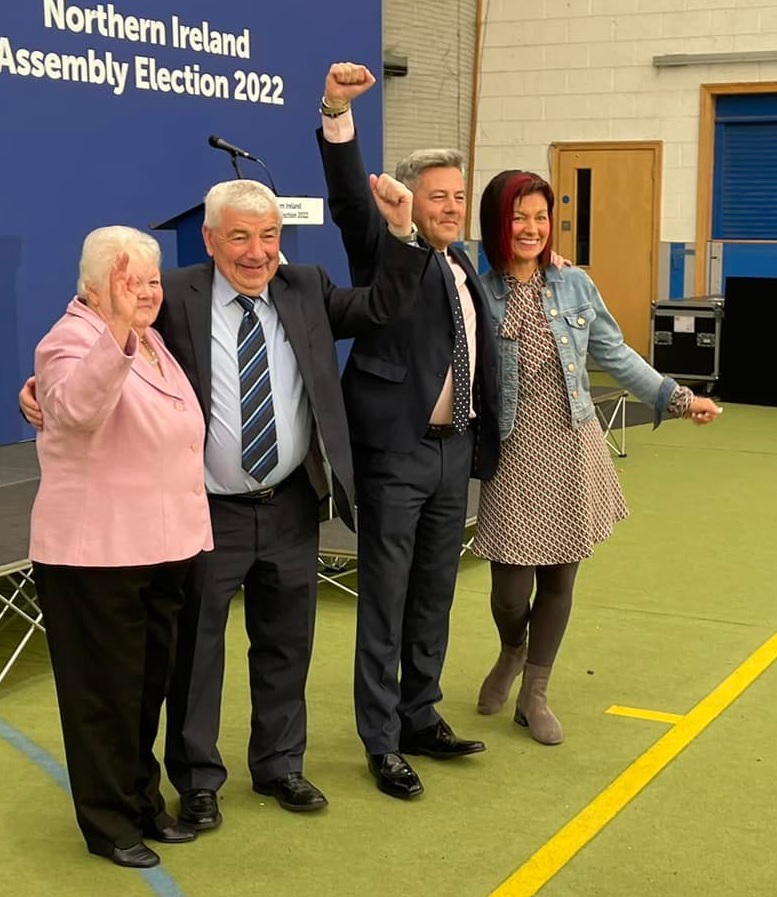 The DUP's Alan Robinson celebrates with his family after succeeding his father George as East Derry MLA.

The following morning has the gentle lull of the second day at a wedding. People are dazed, gathering their bearings for the slog ahead.

It's among a number of subtle, yet notable moments.

Alan Robinson is deemed elected in front of his beaming mother and father, succeeding his father George as MLA for East Derry.

There are hugs and celebrations as candidate after candidate is elected, the gruelling count finally producing results and releasing tired emotions. 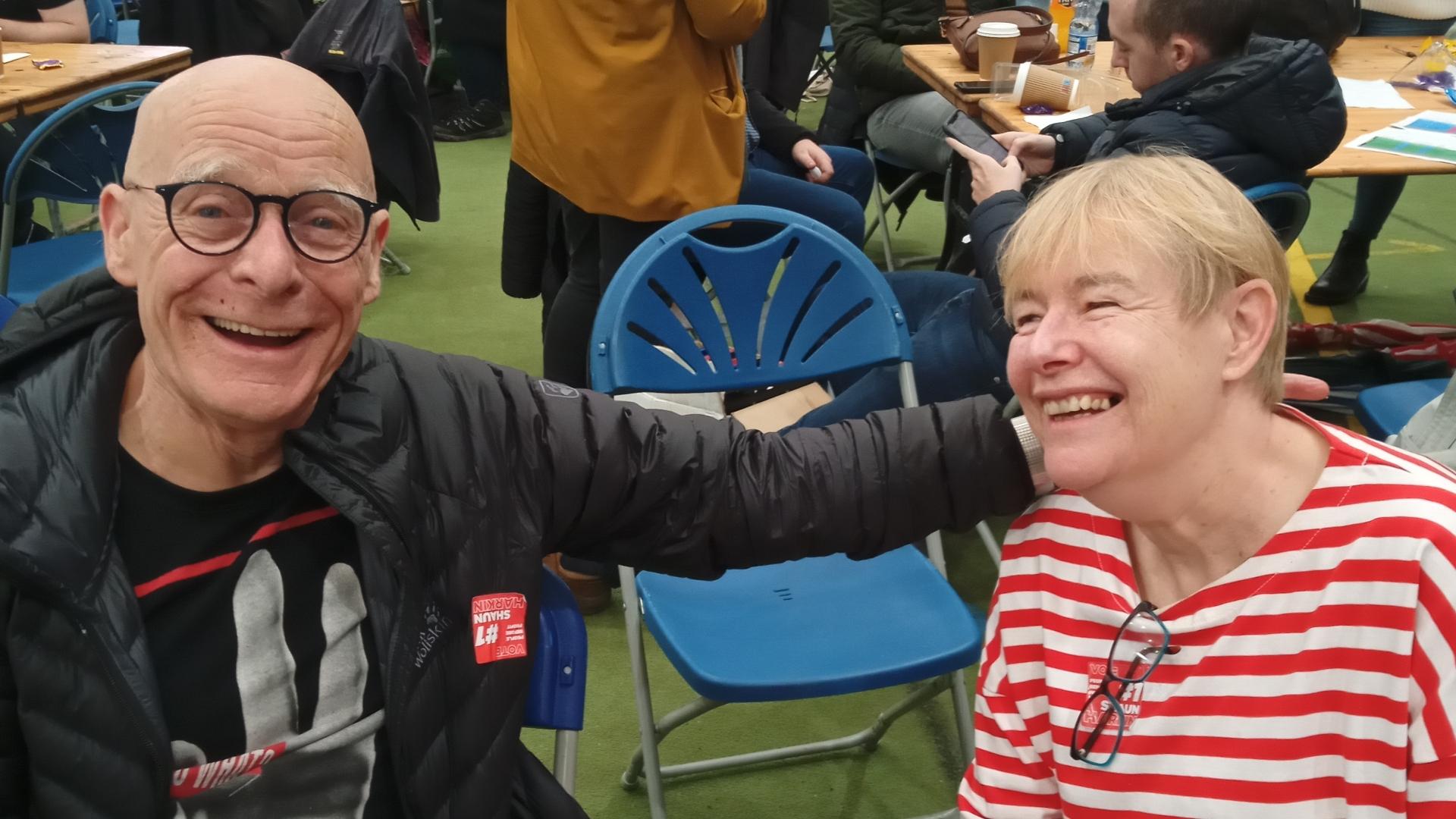 In the throes of a second all-day shift, the outside world pales and the inside of Meadowbank Sports Arena becomes the epicentre.

It's in this atmosphere of shared experience that empathy grows. There are no major displays of triumphalism from those elected, nor jeering from the jilted.

Instead, chivalrous congratulations are offered. In the immediate post-election environment, rhetoric – at least away from the cameras – is dialled down.

The candidates are humble, vulnerable even. They've asked the electorate if they like them and settled in for a lengthy wait to hear the answer.

Politicians normally at each other's throats are engaged in amicable conversation, acknowledging the shared experience of nervous excitement and the thin line separating jubilance and despair.

In Northern Ireland, we love elections. The ballots, the complex system, the apparent and often real tardiness of the count.

All around the count hall, you can see the kind of understanding that we are told the electorate crave, driven by the unique mix of political vulnerability and genuine excitement. 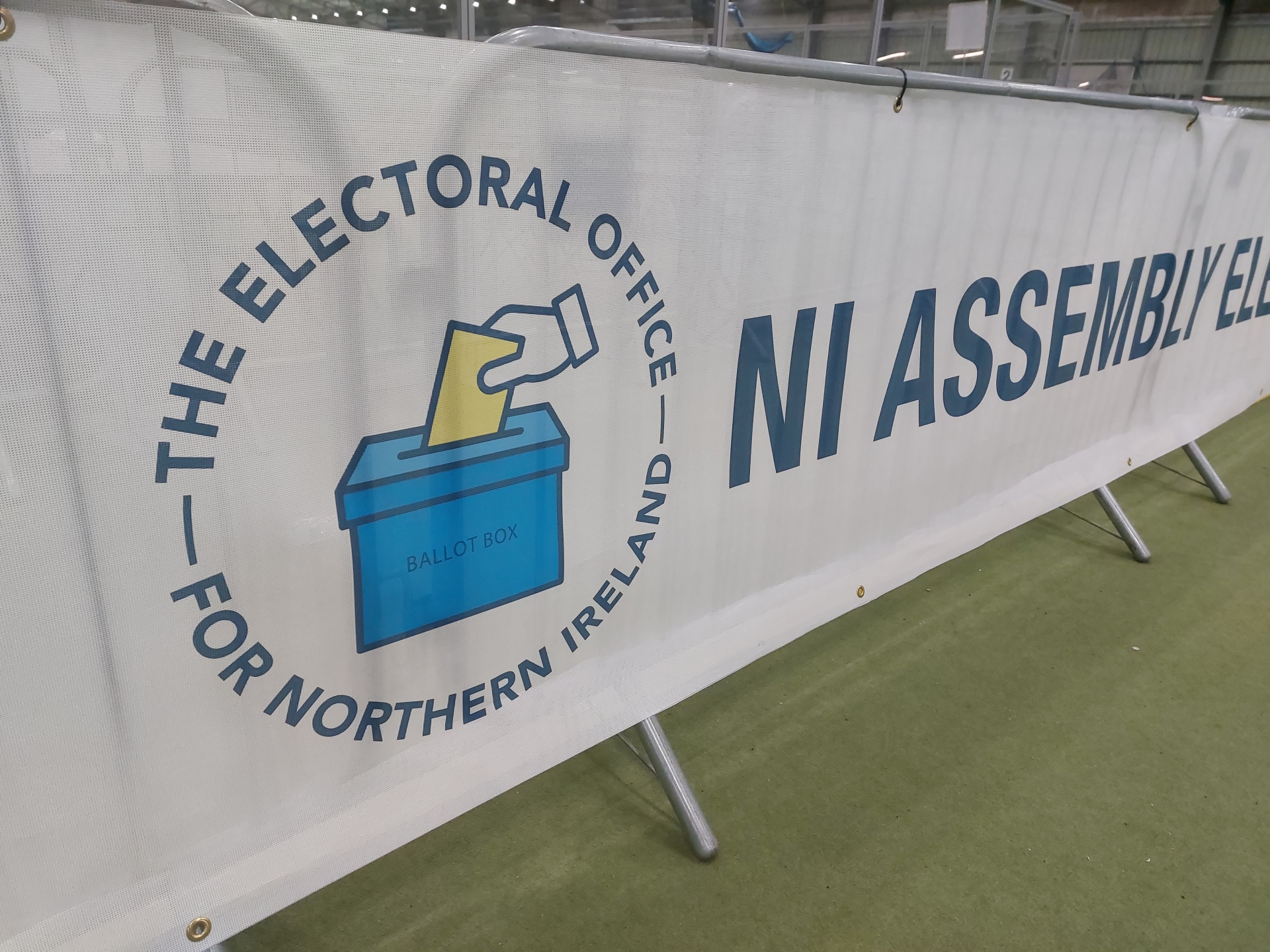 But by Monday, the adrenaline rush of the election campaign will be a distant memory.

Reality calls, and in the scramble to form a government, the atmosphere of the count centre is airbrushed from the narrative.

It's the 5.00am conversation after a party that seemed profound and meaningful enough to change your life, but in the cold light of day just feels uncomfortable.

That cold light is coming this week at Stormont, and under the glare of an expectant media, the camaraderie of the count centre looks set to crumble.

Will this time round be any different? Will Sinn Féin's 'real change' materialise? Are the DUP ready to nominate a Deputy First Minister?

How will Alliance's increased influence affect the dynamic? Is there an appetite for opposition? And how will Jim Allister channel the increased TUV vote against the Protocol?

As ever, an NI election raises more questions than answers, the most pointed of which is this:

Will we be back in Meadowbank strapping on an orange wristband again in a few months' time?