The former NI Chief Electoral Officer read out the result of the Good Friday Agreement referendum. 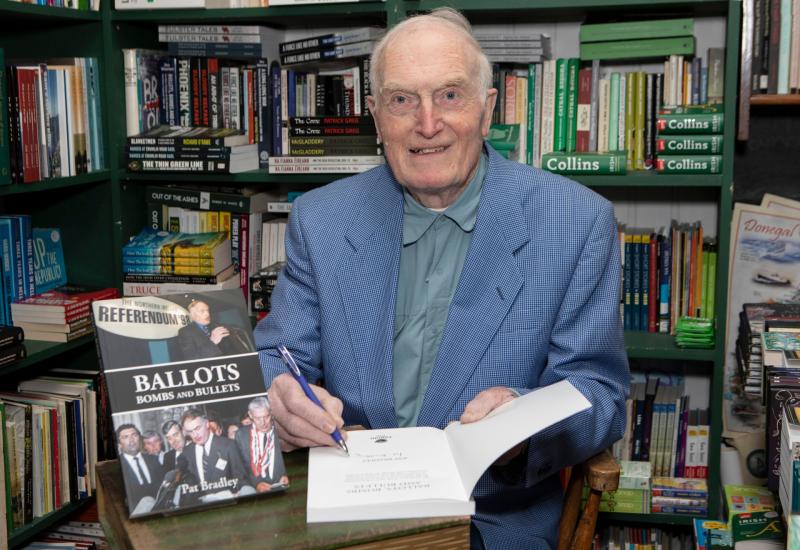 Pat Bradley reads the result of the referendum on the Good Friday Agreement in 1998.

A new memoir has been penned by the Derry man who read out the famous declaration on the result of the 1998 Good Friday Agreement referendum.

‘Ballots, Bombs and Bullets’ is the memoir of former NI Chief Electoral Officer Pat Bradley, and is published by ColmCille Press.

The book is the story of how someone with no background and very little training in electoral law and process found himself in charge of Northern Ireland’s elections at its most challenging time - and becoming a recognised world expert in the process.

The early part of the book relates how Pat Bradley, via an eclectic mix of jobs and roles, found himself appointed ‘Deputy Electoral Officer’ for Northern Ireland in 1974, based in his home town of Derry.

The appointment came despite his clear lack of relevant experience or prior knowledge for the role, and in the context of active paramilitary opposition to the electoral process across NI (and particularly in Derry).

Within weeks of starting the job – and still without any training, backup or even proper office accommodation/facilities - Pat was thrown in at the deep end by the sudden announcement of a 1974 UK-wide General Election.

It was to be the first of many elections that Pat organised in challenging circumstances over the next 26 years – initially in a Northern Ireland close to civil war, and then in various troubled hotspots around the world.

After six years in the Deputy role, Pat was appointed Chief Electoral Officer for Northern Ireland in 1980 - based in Belfast.

A series of key elections affecting NI’s future took place during his time in office – from the election of Hunger Striker Bobby Sands in 1981, to the Forum elections in 1996 and the Good Friday Agreement referendum in 1998.

Pat was broadcast around the world as he announced the “71.12%” result of the Good Friday Referendum in footage that is still regularly screened to this day.

The Secretary of State at the time wrote to him stating that: “The organisation and administration of the elections was a truly formidable task, but one which you performed with remarkable skill.

"Its success is a real testament to your expertise, commitment and unique ability”.

Pat was awarded a CBE ‘For Service to the Electoral Process’ in 1999.

The book then goes on to describe how the knowledge and expertise Pat acquired in Northern Ireland was highly sought after by international organisations like the United Nations and European Union in their attempts to introduce or enhance democracy in areas of conflict.

Both before and after Pat retired as Chief Electoral Officer in 2000 he spent a number of years advising on elections in over 30 countries around the world – from Russia to Sierra Leone, and Saudi Arabia to Hong Kong.

In the process of his work Pat rubbed shoulders with Presidents in places like South Africa and Kyrgyzstan, and was even shot at in East Timor.

An outline of Pat’s experiences in 20 countries is provided in the book, complete with details of various comical situations and close shaves he encountered in the process.

"This book is important because it provides a birds-eye view and a personal perspective into the life and times of a senior public servant, who occupied a pivotal role in one of the critical strands of our public life – overseeing the cycle of elections that eventually took us to the Good Friday Agreement referendum and the new Assembly," he said.

"In the process of which Pat became the go-to person for international organisations when they wanted to run elections in such contested regions as the Balkans, East Timor, the Middle East and many more.

"Pat Bradley for me warrants our recognition for a life of public service dedicated to the people of Northern Ireland and beyond”.

‘Ballots, Bombs and Bullets’ is available now and costs £15. It can be ordered online via www.etsy.com (search ‘Ballots book’), or from Little Acorns Bookstore in Foyle Street and Foyle Books in the Craft Village.