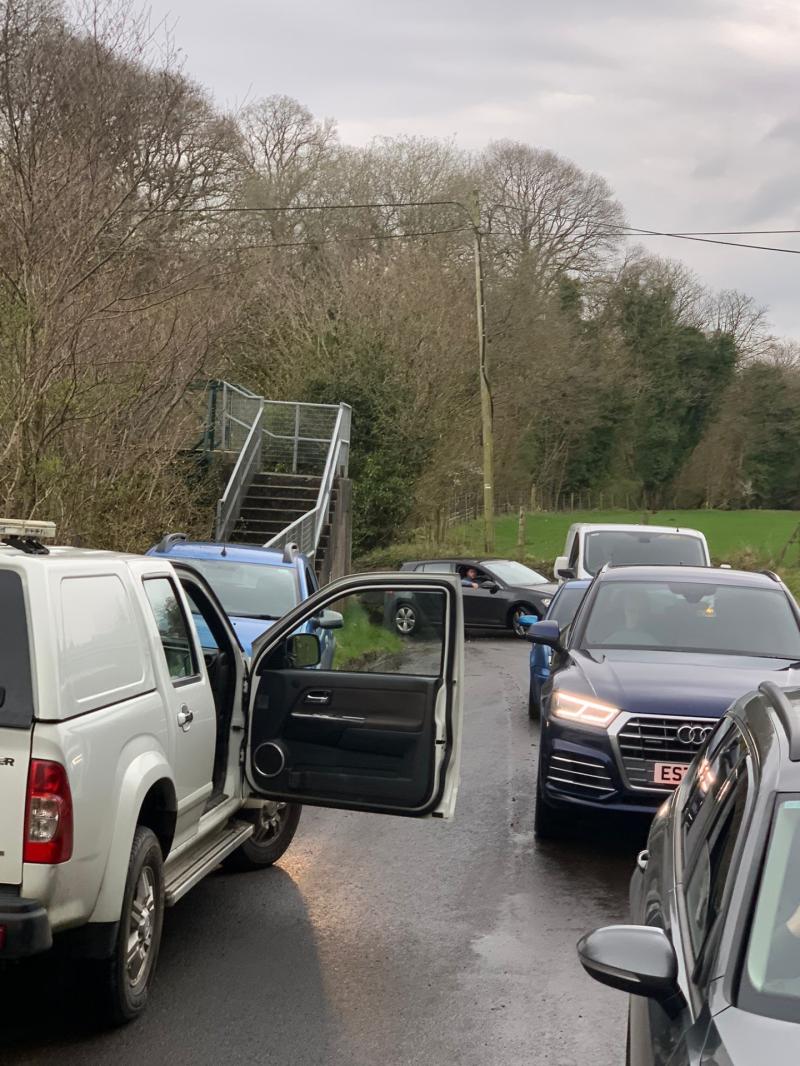 Traffic pictured on the Crebarkey Road outside Dungiven on Friday.

Motorists who are using a narrow country road as a 'rat run' in a bid to avoid tailbacks on the Dungiven bypass are causing traffic issues, it has emerged.

Over the last week, many drivers have been using the Crebarkey Road outside the North Derry town to access Dungiven.

Currently, Derry bound traffic is unable to access the town via the Chapel Road due to ongoing work related to the bypass.

Traffic is instead being diverted onto the bypass with lane restrictions in place.

However, at peak times there are considerable tailbacks at the Feeny Road junction where vehicles are coming off the bypass.

Last week, more and more motorists have been using the Crebarkey Road however many drivers claim they aren't familiar with the area and have blamed sat-nav systems for directing them that way.

On Friday, vehicles came to a standstill on the road as drivers tried to negotiate the Ford that crosses over the country road.

One local resident, who spoke to some of the drivers, described it as 'mayhem'.

“Every single driver said their sat-nav is directing them this way and because the signage is so bad on the new roads all the lorries are going on this road and it's causing mayhem,” said the resident, who preferred not to be named.

“There were a lot of drivers who aren't familiar with the area and when I spoke to them they were all distressed and said that sat-nav sent them that way and they had no idea it was a Ford they had to cross.”

“We did get calls about it yesterday and have been onto the contractors,” she told the County Derry Post on Friday.

“Unfortunately there is no legal way for the police or contractors to stop certain types of vehicles from going via that road.

“It’s a public road and anyone is entitled to use it. It’s also outside of the contractor's site so they can’t even put up signage to discourage vehicles from going down that way.”

Ms McGurk said her party had campaigned to get the Department for Infrastructure to erect temporary traffic lights at the Feeny Road junction to minimise tailbacks over the bank holiday weekend.

“We had already planned for the extra traffic this weekend and got DfI to put traffic lights on the Feeny Road junction to prioritise the A6 traffic and try to minimise the tailbacks,” she continued.

“That was supposed to stop the side roads becoming rat runs. Unfortunately some drivers have taken it into their own hands and are causing the issues.”