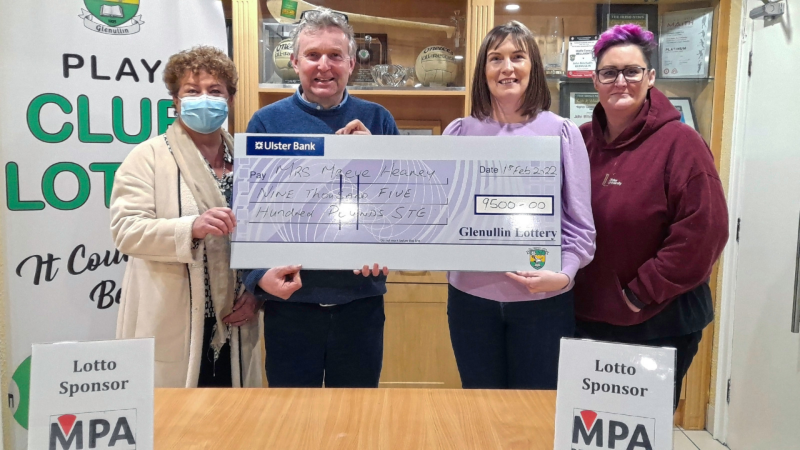 Two people have struck it lucky by recently scooping the jackpots in a lotto run by a County Derry GAA club.

Following on from Glenullin GAC's first lotto winner at the end of 2021, the club had another big winner last month.

The lottery, which has only been running for a year, is a combined effort being promoted by Glenullin's football and camogie teams and is sponsored by MPA Recruitment which is run by local woman Mary Pat O'Kane.

A spokesperson for the club revealed that the lotto has grown from strength-to-strength over the last 12 months, with people from around the world playing every week.

A local councillor is keen to see the issues resolved ahead of the summer.

“Glenullin lottery has been one of our success stories in the club over the past year,” said the spokesperson.

“It has grown every month, now having an extensive range of players from all around the world, including Australia, Sweden, America, Canada, South China, France, and not forgetting our own local community and the many players from other clubs in Derry and further afield in Ulster.”

Proceeds from the lottery have been used to benefit the local community, according to the spokesperson.

“The lottery has made such a difference in our community helping to fund various projects which include our state-of-the-art wall ball, all our youth have been given half zip tops, shorts and socks, and, most recently, our volunteers delivered upwards of 150 Christmas dinners, prepared by the Bushtown Hotel, to senior citizens,” continued the spokesperson.

The lotto is run live on Facebook every Sunday night, with this weekend's jackpot sitting at £4,500. You can play by logging onto Klub Funder or at other local outlets.

How a County Derry-born horse won the Gold Cup

'The Thinker' won the title in 1987.
ADVERTISEMENT - CONTINUE READING BELOW