The East Derry politician said serving the public had been the 'pleasure' of his life. 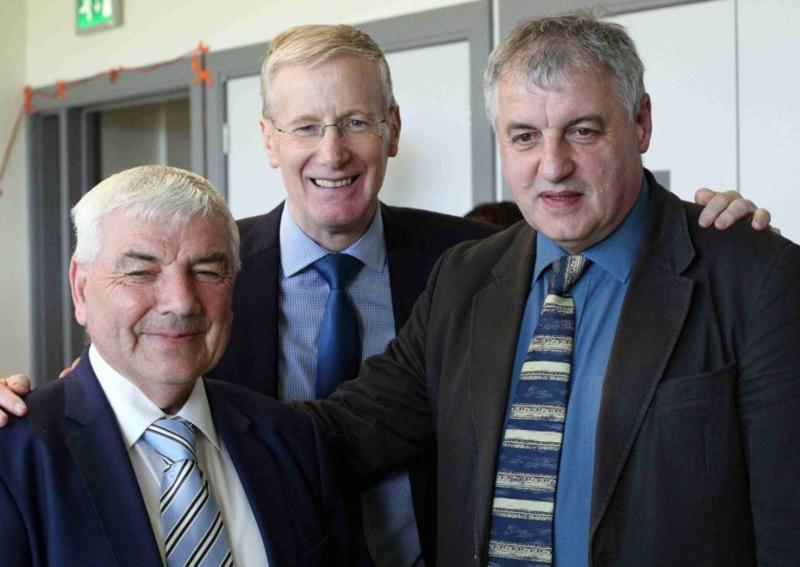 George Robinson along with Gregory Campbell and Maurice Bradley.

A long-serving County Derry MLA has announced he will not stand in the upcoming election and will be retiring from politics.

George Robinson, a DUP MLA for East Derry, has released a statement saying he would be retiring as an elected representative when the Assembly dissolves in ten days' time.

“Given my age, I am sure it will come as no surprise to many,” he said.

“It has been the absolute privilege of my life to serve and be a voice for the people of the Roe Valley as a former Councillor for 27 years, but also East Londonderry as an Assembly member for 18 years.

“I want to thank my wife Anne for her support that allowed me to do what I do but left her on so many occasions at home alone from morning until late.

“To my current staff, Alan, Edgar and David, the role they played within my office was exemplary. I simply could not have fulfilled my role as an Assembly member without their solid and unwavering support.”

The MLA recalled how he had joined the DUP due to the support they offered him and his family after they were forced to leave their home.

“I joined the DUP in the early 1980s during a very troubled time in our Province while working for the Ministry of Defence,” he said.

“It was a time that I and my young family faced significant anti-social and sectarian behaviour, which developed into intimidation from our home.

“I sought help from the largest unionist party but they offered little. The view amongst the working class was, as we were not big and monied, we didn't have land then we couldn't offer anything in return.

“In return both Anne and I joined the party and the rest is history. My party held the hand of my family at our time of need and it set the template for me to always try to do similar for those at their time of need.

Councillors were described as 'carrying on like they were in a playground'.

“During these 37 years, there have been lows, losing my dear mother who never got to see the wee boy from Dromore rise to the 'House on the Hill'.

“The loss of the Roe Valley Hospital, jobs being stripped from the town in their 1000s, but there have been so many highs.

“Greeting our Queen at Bellarena Rail Halt, helping many local people and groups, and the pinnacle; going to Buckingham Palace to be awarded an MBE for services to the public.”

A seemingly unerring figure in the East Derry political landscape, he acknowledged the people of his constituency.

“At the last election I contested in 2017 and at the ripe old age of 75 it was said by a Nationalist opponent; 'when will we ever get rid of Robinson?'” he said.

“Well, the time has now arrived for this Robinson to move on, only by virtue of retirement, but like Unionism across the Province, I bow out unbroken and I bow out undefeated.

“Farewell. I give thanks to everyone who has supported me over the years. It has been an honour and it has been the absolute pleasure of my life to have represented you, especially the majestic Roe Valley and the amazing, kind, incredibly friendly people who stem from the roots of the Londonderry Air and my hometown of Limavady.”

George's son Alan, a current councillor on Causeway Coast and Glens Borough Council, is widely tipped to run for his father's seat in the upcoming Assembly election for the DUP.

Derry district has highest homeless rate in the North

Department for Communities data showed the rate per 1,000 of population for each district.
ADVERTISEMENT - CONTINUE READING BELOW