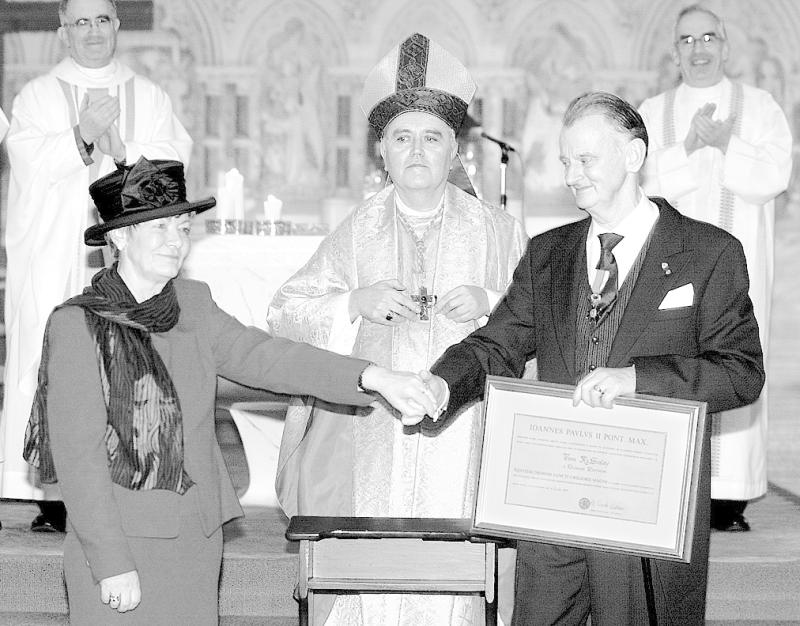 Dr. Tom McGinley reaches out to hold his wife, Deirdre’s hand at the end of the service at St. Eugene’s Cathedral.

Today we take a step back 20 years and an article which appeared in the Derry News, Thursday, 14th February, 2002

Well over a thousand people flocked to the Cathedral to watch one of Derry’s most respected individuals receive the rare accolade, which was bestowed during a ceremony led by Bishop of Derry, Dr Seamus Hegarty.

On receipt of the traditional medal, sword and plaque, Dr McGinley informed the congregation of well-wishers that none of his achievements would have been possible if it had not been for the strength and support of his wife, who herself has battled with cancer over the last seven years.

Speaking to the Derry News at a reception held later at the Hospice, Dr Tom again voiced his appreciation.

“My tribute to my wife is well deserved, and I’m delighted to get the opportunity to do this – particularly because all the awards I’ve received in the past I have dedicated to my parents and my teachers,” he said.

“And now I have the opportunity to pay tribute to the one person who has given me the time and support to do this. It has been an inspiration to me over the past seven years that she has come from cancer to treatment, chemotherapy, radiotherapy, recurring cancer, further chemotherapy.

“Her motto is very much tomorrow is a mystery, and every day is precious, and she has really helped me cope.”

Dr McGinley also paid tribute to all those who had been involved in the hospice over the years – and he had a special word of thanks for the Cathedral Choir, for making Monday night’s ceremonies “so special”.

During the service, Bishop Hegarty paid tribute to the tireless work of Dr McGinley in the establishment of the hospice, and his invaluable role in the community.

And he condemned those who abuse and assault health professionals in the line of their duty.

“These attacks on public service workers generally are a most worrying and concerning phenomenon,” he said.

“From this gathering here tonight we wish to express our support for and our solidarity with all who work for the common good of our community and especially for those in the caring/healing professions.”

Hundreds of Derry people turned up at the service, including MEP John Hume, and Bishop Edward Daly who participated in the service along with representatives from across the diocese.

Also present was James Doherty the only other living recipient of the honour in the city.

Speaking afterwards John Hume remarked: “I think that the huge turnout at the cathedral service, from all sections of our community in Derry, and from across the divide, gives a serious impression of the enormous respect for Dr Tom McGinley and for the great work he has done in the establishment of the Hospice.

“And of course he has had great support from a wonderful team of such dedicated staff.”

Speaking at a reception at the Foyle Hospice after the ceremonies, the Mayor of Derry Mildred Garfield congratulated Dr McGinley on behalf of Derry City Council.

“I’m delighted to be here to celebrate Dr McGinley’s Papal Knighthood, I really think that he deserves it,” she said.

“He has worked extremely hard over the past number of years in developing the Foyle Hospice and Daycare Centre and I’m delighted that he has been recognised for the work he has done on behalf of everyone in the city. I wish him all the best in the future.”

Ciaran McGinley, fundraising manager for the Hospice, and Dr Tom’s son, spoke of the McGinley family’s delight at the honour.

“This has been a superb night, and a fantastic recognition of the work that my father has been doing for over the past thirty, forty years in the care of the sick, people with cancer and life threatening illness,” he said.

“But I would also like to congratulate the community, for without them this could not have happened. You can see from the response of the people here tonight just how caring they are.”

Dr McGinley himself was “overwhelmed” by the attendance.

He commented: “There were people from all sections of the community there, people who travelled from all parts of Ireland just to be here for the occasion, and I think it demonstrates the strength of the devotion that people have for the Hospice.

“It has grown from within the community, they have felt part of it belongs to them, and their support has been incredible.

“We wouldn’t be here tonight except for the spontaneous response when we began the fundraising in 1993, and it has been a rollercoaster ever since. I thought the service was lovely, in particular the beautiful singing of the choir.”

One man, who had more reason than most to laud the work of Dr Tom, was Andrew McClay, who attributes his life to the doctor for helping him through his own fight against prostate cancer.

“I cannot put into words what he has done for me,” he said. “There is no one more deserving than Dr Tom for this award. I truly believe that some people come along at different times when they are needed and Dr McGinley is one of those people.

"I met him in my club a long number of years back and he has never failed to impress me with his strength, determination and courage. This is beyond tremendous.”