The local retailer were responding to the organisation's Christmas charity appeal. 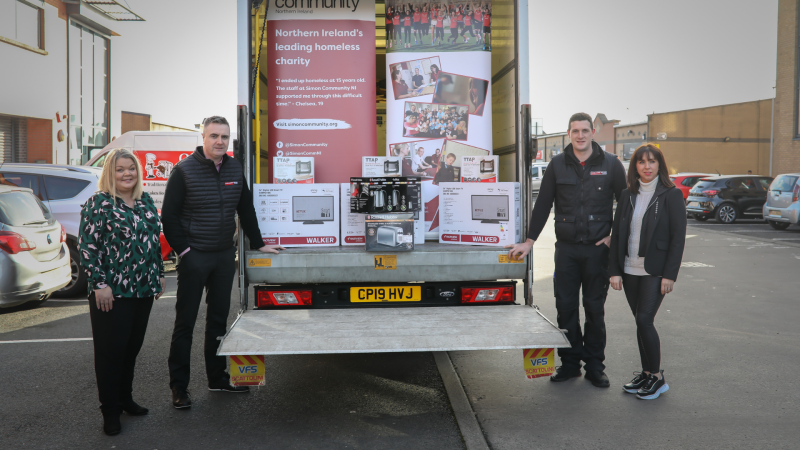 Donaghy's presenting the Simon Community with the donation.

Kilrea-based electrical appliance retailer Donaghy Bros has donated £5,000 worth of goods to the Simon Community NI.

The money was donated as part of the 2021 Christmas charity appeal by ‘Digg Deep for Kids’, founded by Caroline O’Neill from Dungannon.

Additionally, Donaghy Bros have provided another £4,000 worth of goods to the charity at cost price to allow the funds raised by the Digg charity campaign to stretch further.

The Simon Community are one of three local charities that have benefited from the amazing Digg Deep fundraising initiative which raised over £170,000 in a matter of weeks in December ‘21.

Donaghy Bros were quick to contact Caroline to offer their support, much as they did in 2020 for Women's Aid NI, when they recognized they could help the Simon Community.

The electrical retailer provided practical items, such as kettles, toasters, TVs and wall brackets, to help improve the numerous homeless accommodation services that the Simon Community run across Northern Ireland.

Their donation is also being used to help facilitate ‘starter packs’ that the Simon Community provide to their service users as they make the move to independence in their next home. 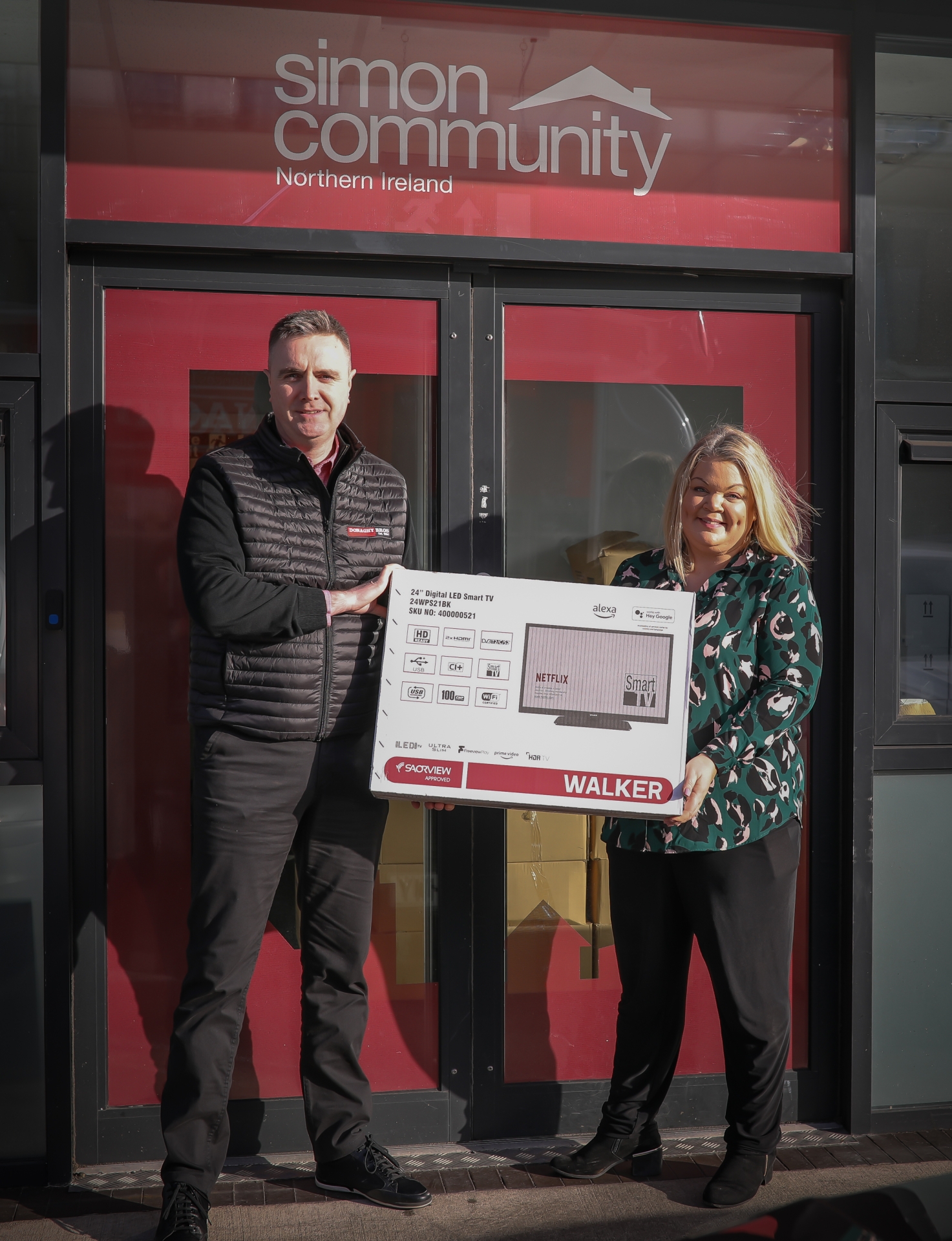 James Donaghy, Managing Director of Donaghy Bros commented: “We were thrilled to be a part of the incredible Digg Deep campaign again this year - especially when we learned that one of the charities was to be the Simon Community, as we knew we could make a tangible difference and offer practical assistance to the charity with our extensive range of electrical goods.

"The desired list of items for their accommodation services was modest and included everyday items such as kettles & toasters to aid independent living and wall mountable TVs to enable access to entertainment outside the communal areas in some of their accommodation projects which we were delighted to help out with.”

Joanne McCallister, Head of Income Generation for the Simon Community was heartfelt in her thanks to Donaghy Bros for their very generous donation: “We want to say a huge thank you to James and Dermot Donaghy for their tremendous support in donating these items and for allowing us to purchase other appliances at cost price.

"We’re also grateful that through this charity donation, via the Digg campaign, that Donaghy Bros are raising awareness of our vital services to provide support for our homeless residents and our ongoing work to end homelessness in the province.”

Co-Director of Donaghy Bros, Dermot Donaghy, travelled to the Simon Community Hub in Belfast on Thursday, February 3, in order to deliver the donated electrical goods in person and learned first-hand about the services that the Simon Community offered and their long terms plans to address homelessness in Northern Ireland.

Dermot remarked that he was pleased to be in a position to help the charity and was heartened to hear that all the donated items would make such a significant difference to the adults, young people and families who reside in the Simon Community accommodation hubs.

He added: “Donaghy Bros look forward to continuing to support the Simon Community this year with their plan of providing housing solutions to their residents and believe we can play a vital role in assisting them with the kit out of the new homes for those members of our community who are in need of a permanent housing solution.”

The founder of the ‘Digg Deep for Kids’ campaign Caroline O’Neill travelled to the Simon Community to witness the handover take place and reiterated that she was astounded by the number of local businesses that volunteered to assist her fundraising efforts. 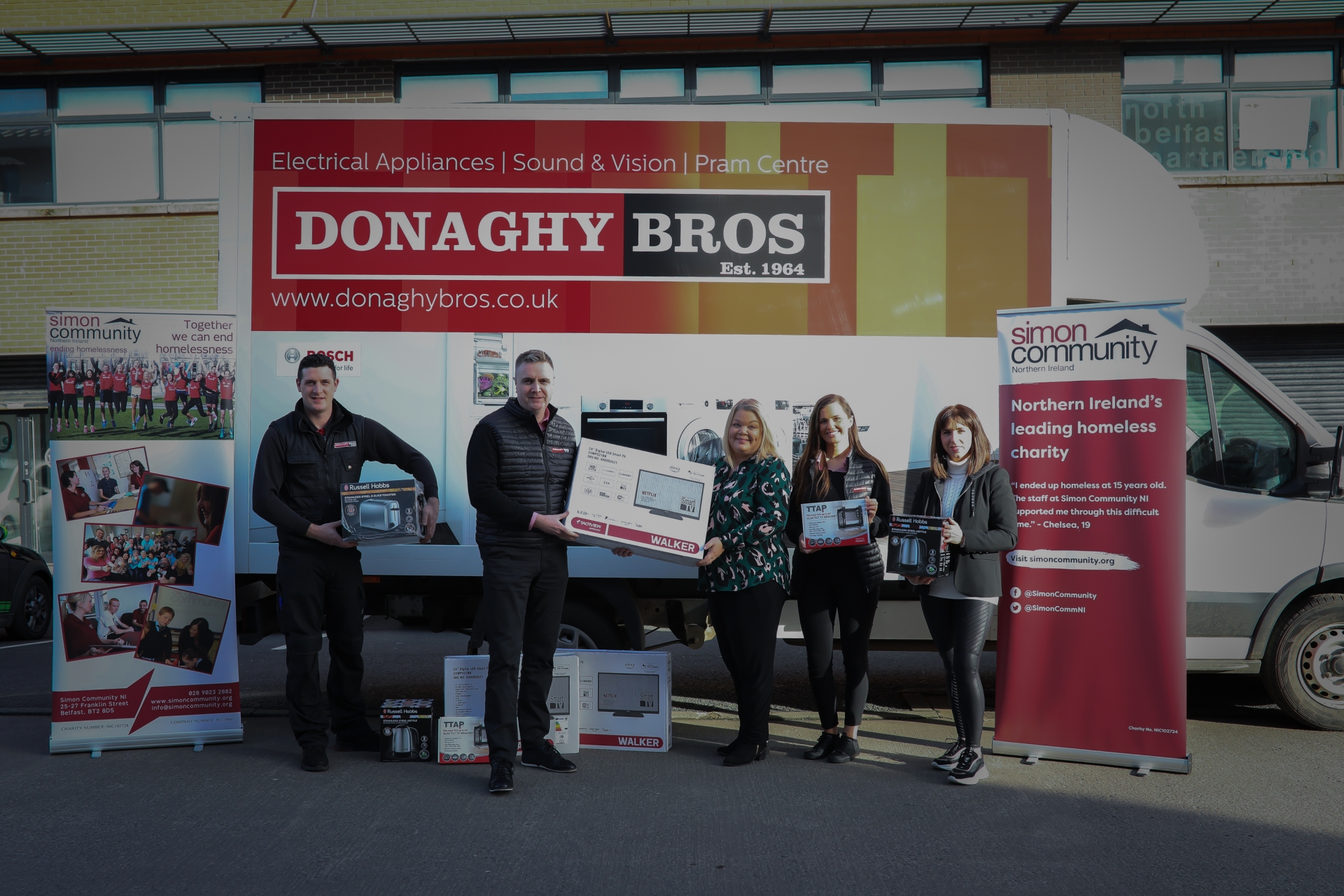 Caroline added: “I have been blown away by the generosity of Donaghy Bros who exceeded our expectations in their support for those who need the services of the Simon Community.

"Offering practical assistance such as providing a TV for the resident’s bedrooms so that they don’t have to share a communal TV really makes a different to the quality of life and dignity of those residents who find themselves homeless through a variety of circumstances.

"And everyday items such as kettles and toasters will make an unbelievable difference for so many families as they embark on a new journey of independent living.”

One male is in custody following the incident.
ADVERTISEMENT - CONTINUE READING BELOW