Eamonn Burns is carrying out his '50 Kicks for Cancer Care' fundraiser this weekend. 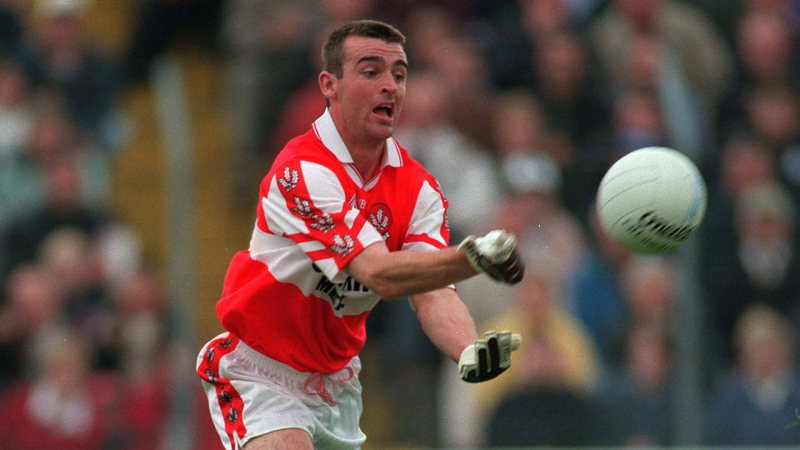 Eamonn Burns in his Derry days. Pic by David Maher/Sportsfile.

A former Derry intercounty footballer is set to mark his 50th birthday by holding a star-studded charity fundraising event at his local GAA club.

Eamonn Burns, from Ballinascreen, has rounded up a host of his former team-mates to take part in the '50 Kicks for Cancer Care' challenge at St Colm's GAC on Saturday January 29.

The fundraiser will support both Charis and MacMillan Cancer Support, who Eamonn said gave him 'great advice, moral support and financial help' a few years ago.

"I would like to help give something back to MacMillan; for the people who need them now and in the future," said the 1993 All-Ireland winner.

"On the night of the charity event (29 Jan 8pm @ Ballinascreen GAC) there will be 2 buckets there; one for MacMillan and another to raise a few pounds for Charis also; a local cancer charity that helped me greatly post treatment and surgeries."

The fundraiser will consist of each participant having one or two kicks at the Ballinascreen posts from 25m - outside the central D - with contributors asked to guess how many kicks out of 50 the players will accurately convert.

"Any donation is welcome and if you add a guess of how many frees we will score out of 50 to your name when you donate; we will enter you into a competition to win £200 (sponsored by Ballinascreen GAC)," said Eamonn.

"If you can’t attend the event in person (and everybody is welcome), we hope to screen the 50 kicks live on my Facebook page at approximately 8pm on Saturday January 29.

"You can still donate after this time but obviously will be too late for the competition."

As well as Derry and Ballinascreen team-mates, Burns has gathered up a number of Down opponents from the 1991-94 sides to take part, with Mickey Linden, DJ Kane, Ross Carr, John Kelly, Gregory McCartan, Mark McCartan, Brendan McKernan, Eamon Connolly, Brian Burns and Marty Laverty all lending their support.

Damian Cassidy, Brian McGilligan and Seamus Downey will also be present on the night.

"Thank you very much for the contributions so far; we’ve well exceeded the target but we will keep going because they are two great charities," added Eamonn.

You can make a donation, or find out more information about the event, by visiting the Go Fund Me page.