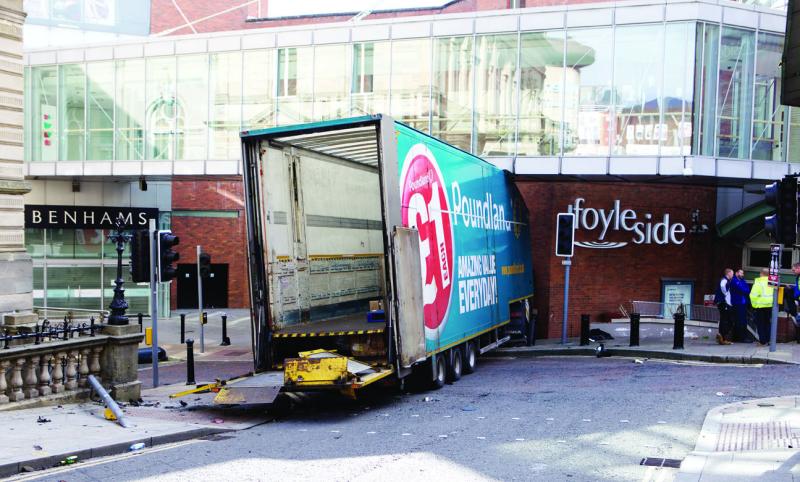 A man who released the brake on an articulated lorry causing it to roll down a hill and hit the entrance of Foyleside shopping centre resulting in damage of around £200,000 has been jailed at Derry Magistrate's Court. Ryan Doherty (23) of Durrow Park in Derry admitted tampering with a motor vehicle and six counts of criminal damage on September 11, 2016. The court was told the driver parked his vehicle on Linenhall Street to unload goods at 3.23 am facing down the hill. A short time later at 4.15am as the driver was waiting for his helper to return he saw the lorry begin to move off and roll down the hill turn the corner, strike a parked car some street furniture before hitting the entrance to Foyleside. CCTV showed three youths approaching the vehicle and Doherty pushing a button before running off. Defence barrister Stephen Mooney said there was 'a colossal amount' of damage caused and his client was 'acutely aware' he was going into custody. He said Doherty deserved credit for his guilty plea. The court was told the driver of the vehicle had also been prosecuted in connection with the incident. The barrister said it was 'an act of recklessness' but he did not think it could be said Doherty intended to do what he did. Mr Mooney said that Doherty's record was 'not the most extensive' but he knew he was going to prison. District Judge Barney McElholm said this was 'an absolutely disgraceful thing to do' and added that someone could have been killed. He said obviously Doherty thought it would be funny to let the brake off. Sentencing Doherty to nine months in custody and nine months on licence and fining him £500 the judge said he could reflect on how funny it was over the next nine months.
ADVERTISEMENT - CONTINUE READING BELOW