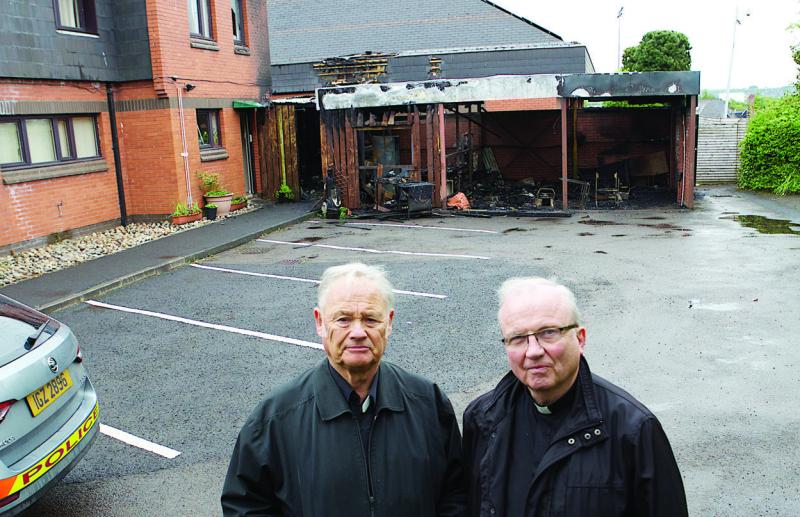 Holy Family parish priest, Fr. Paddy O’Kane, yesterday offered up prayers for the “young people” behind an arson attack on the Ballymagroarty Church at the weekend. A fire was lit in a garage adjacent to the church on Friday night, destroying its contents. Damage was also caused to the parochial house and roof of the church which opened on 25 September 1983. Father Paddy O’Kane said the blaze was discovered by staff around 10.10pm on May 24. The well-known local priest was visiting a sick man whose son informed him of the blaze after seeing photos on social media. Speaking to the Derry News after the incident, he said: “There’s damage to the church roof but it won’t stop masses going on.” “Police have taken CCTV footage with them.” He added: “I’m shocked and disappointed that anybody would attack the church and parochial house in this way. The whole parochial house could’ve been burnt only for the fire brigade, so I want to say we’re very thankful to them and their quick response to contain the fire. “And the second thing I’d say, is to ask the young people who did this, what they gained? “I want them to know that we’ll be praying for them at all our masses this weekend.” Gold clubs, a bicycle, and gardening and bee-keeping equipment were amongst the items destroyed in the garage. He believes young people were responsible for setting the fire as they had to scale a fence to access the area. Northern Ireland Fire and Rescue Service Group Commander Andy Burns said the attack put lives in danger as a community event was being held in the parochial house when the blaze broke out. He said the fire was started in a garage to the rear of the parochial house and the house itself was damaged, with heat causing the windows shatter. The fire also spread to the church roof and tiles were removed by the fire service to prevent it spreading further. “This had the potential to spread to the adjoining parochial house, which was occupied, and people can lose their lives in this type of incident," he said. "We would ask our young people, please do not get involved in setting deliberate fires, setting fires like this is very dangerous." CCTV footage has been passed to the PSNI for investigation. Detective Constable Fielding said: "An outbuilding adjacent to Holy Family on Aileach Road was set alight at around 10.30pm. The blaze spread to the church and nearby parochial house causing damage to both. The outbuilding was completely destroyed. “At this stage we believe two males may have been involved in starting this fire and we are keen to identify them. “We would like to hear from anyone who was in the area at around the time of the fire or anyone who may have information regarding this crime. The number to call is 101, please quote reference 2311 24/05/19." ‘Dangerous act’ Sinn Féin Councillor Mickey Cooper commented following the deliberate fire. Cllr Cooper said: “I visited the scene on Friday night after being contacted by worried parishioners as the blaze could be seen across a wide area and photos of the fire appeared on social media. “There was shock in the local community and a concern that the fire could spread to parochial house and the chapel. “I would like to commend the quick actions of the Fire Service in preventing this blaze from spreading as this could have been a lot worse. “It’s important in the coming days that we all offer our support to the local parish priest Father Paddy O’Kane in whatever assistance is needed.” Concluding, he added: “If anyone has any information on those responsible for starting the fire they need to bring it forward straight away.” Meanwhile, SDLP councillor Shauna Cusack said: “There really are not enough words to condemn such a selfish, ignorant and dangerous act, how low can you get… “These people really need a reality check on the seriousness of what they have done! Thinking of Father Paddy and all the Holy Family parishioners.”
ADVERTISEMENT - CONTINUE READING BELOW