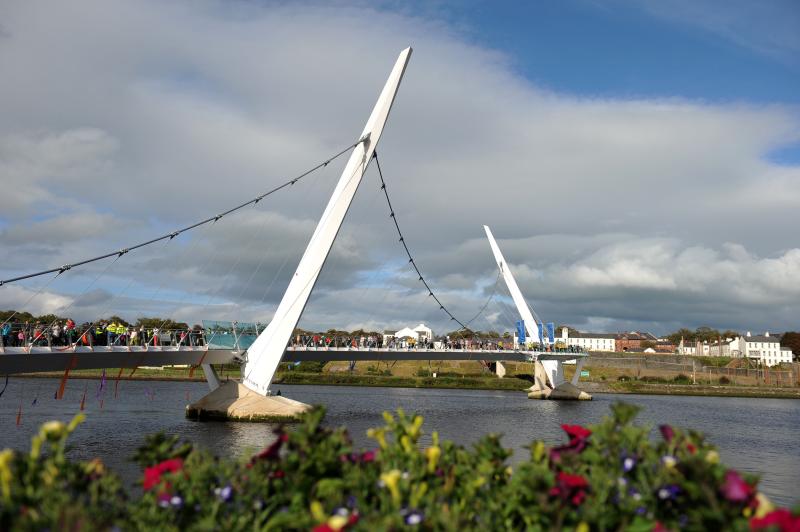 Derry’s Peace Bridge turned eight years old this week and in that time it has become one of the country’s biggest tourist attractions. The iconic cycle and foot bridge connecting Ebrington Square to the city centre which officially opened on 25th June 2011 now attracts almost 1 million visits each year, according to the Northern Ireland Annual Visitor Attraction Survey 2018. It was seen as a way of connecting the largely Protestant east bank of the River Foyle to the predominantly Catholic west bank. More people have visited the Peace Bridge in the past year than Titanic Belfast, Carrick-a-Rede, the Ulster Museum, and even Derry’s own City Walls - which is said to have attracted 424k. Giant’s Causeway remains the top tourist attraction, with 1,039,000, aside from country parks at Laganvalley and Portadown. The survey, published earlier this month, shows that visits to the Peace Bridge have risen by 5% in the past year to 971,000. It is one of the largest and most iconic projects to be supported under the PEACE III Programme. The third bridge across the River Foyle, the Peace Bridge was given £14.677m from the European Union’s PEACE III Programme managed by the Special EU Programmes Body (SEUPB). The programme’s theme of Creating Shared Public Space aims to support large scale infrastructure developments that tackle problems of separated communities by creating genuine new shared space or transforming contested space. Delivery of the Peace Bridge was viewed as a wider peace and reconciliation programme to proactively encourage greater levels of positive engagement between all communities living within the city. Its aim, say those who designed it, is to physically and symbolically unite both sides of the River Foyle and is conceived as two distinct structural systems that work in harmony, a pair of identical curved suspension structures, each allied to opposing banks, in a fluid “S” shaped alignment. At the middle of the river both structural systems tangibly overlap, boldly interacting to create a single unified crossing – a structural handshake across the Foyle and an embrace in the centre of the river.
ADVERTISEMENT - CONTINUE READING BELOW