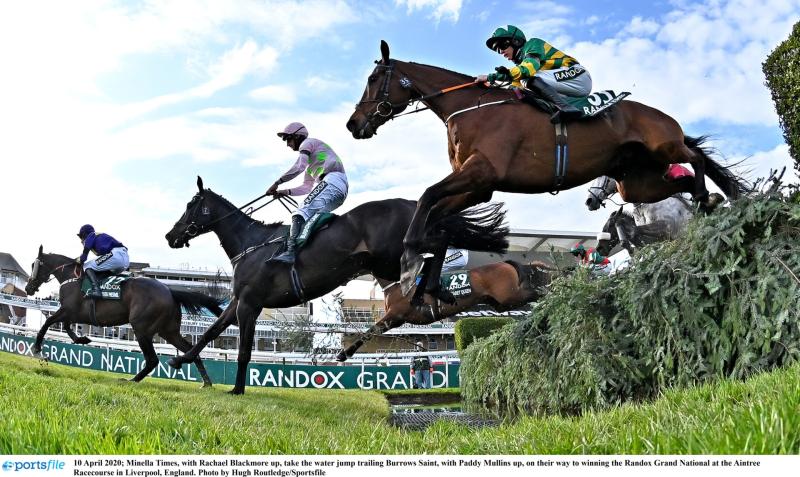 Tiger Roll won't be there after his retirement but the 2022 renewal of the Aintree Grand National looks like one of the best in years. Minella Times, last year's winner, returns to defend his crown with a host of other highly-rated chasers lining up to lower his colours.

You could probably pick up 25 horses in the race this year and make a strong case for them such is the strength in depth but I've tried to narrow my best bets down to five. Let's hope the winner is among them.

I like this horse a lot and he has had a good prep for this. He was just touched off by Any Second Now over 3M 1F at Fairyhouse last time out in February, beating Burrows Saint and Coko Beach by miles in the process. This marathon trip could be what he's calling out for and he jumps and travels really well in his races. He was third behind Galvin and Next Destination in the National Hunt Chase over 3M 5F last year at Cheltenham and that form has worked out well. Snow Leopardess and Remastered were 4th and 5th that day. This horse has a lovely profile for the race and could be a major player over the mammoth trip.

This is the first horse I backed for the 2022 Grand National and I think he's had a better prep for it this year than last year when he finished a distant seventh behind Minella Times. Trainer Paul Nolan has effectively laid him out for this and he has brilliant staying credentials. Some say he just didn't stay the extended trip last year but he might have just got tired. He had wind surgery over the winter before last year's national and when he lined up in Aintree, he hadn't been on the track for 146 days. He's had two nice runs this season at Galway last October and Fairyhouse in February when he gave weight to all but one rival and still managed to finish second behind Full Time Score. Smoking Gun was third that day. Discorama's best form is at marathon trips and he was third in the 2020 Ultima at Cheltenham and was just touched off into second in the National Hunt Chase at the same track a year earlier.

One of the home challengers I think has a big chance in this at a huge eachway price. He was second to Mighty Thunder (another not without a chance here) in the Scottish Grand National last year and has been in the frame in his three starts since. He is rarely out of the frame when running beyond three miles and a wind surgery in 2020 appears to have revitalised him. His first run after a 188-day break at Kelso in October last year reads very well. He was fourth, just four lengths behind Fortescue in third. He effectively gave Fortescue 21 pounds that day as Dingo Dollar carried 11st 10 and Fortescue carried 10st 8lbs but with a five-pound claimer onboard, effectively bringing his load to 10st 3lbs. Fortescue has since beaten Fiddlerontheroof at Ascot with a similar weight differential. That makes Dingo Dollar's rating and weight very appealing to me here, considering Fiddlerontheroof has been saddled with 11st 4lbs. Dingo Dollar carries 10st 11lbs.

Another strong hand for Gordon Elliott who looks to have a great chance of regaining the Grand National despite the absence of Tiger Roll. One reason I like this one over some of his others is the fact it skipped Cheltenham to come straight here. He was fifth in this race last year and finished off his race very well. He carries a lot more weight this time but he was only a seven-year-old last year and can come on again. He unseated at Listowel last September but prepped for this with a stellar run behind stablemate Run Wild Fred (second in the National Hunt Chase at Cheltenham) when they met at Navan in November. He hasn't run since and you have to think the horse's eventual weight for this race was in connections' minds putting him away for so long. At the time of writing, Davy Russell is still undecided whether or not to ride this lad or Run Wild Fred. That suggests to me there isn't much between them and with a little less weight on his back and course experience, Farclas is the one for me.

Trainer Ciaran Murphy has been purring about this lad for a while and this has been the target. He even successfully convinced JP McManus to buy this horse earlier this year such is the esteem he holds him in. In fairness, he does catch the eye off a nice low weight here. He'll carry 13 pounds less than top weight Minella Times and has every chance after finishing third in the Irish Grand National last year. Of his three runs since, I loved his spin around Leopardstown in the Paddy Power Chase at Christmas. Carrying 11st 6lbs, he travelled well and finished third behind School Boy Hours, who he was giving 12 pounds to. Braeside was fourth that day with Death Duty fifth. He's going to love the marathon trip and provided he enjoys the unorthodox National fences, he'll be right there with a couple to jump. Rumour has it, Murphy, a carpenter by trade, has constructed a practice one for him to train over!