The NIFRS said police were informed about the nature of the fire. 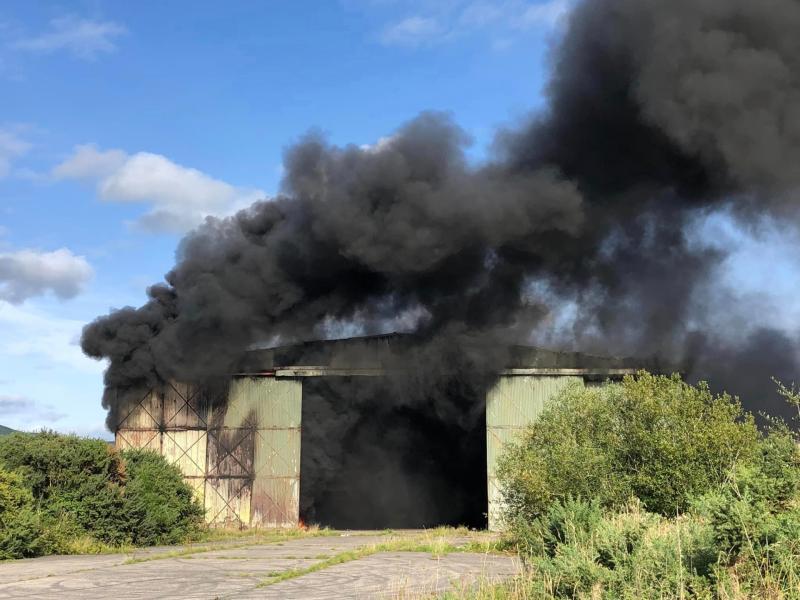 Smoke billowing from a fire at a disused air hangar in Aghanloo, near Limavady, on Saturday afternoon. Pic supplied.

A fire that occurred over the weekend at a disused RAF air hangar in County Derry is not being investigated by the police.

The blaze, which began on Saturday afternoon (September 17), was contained to just one of the large hangars at the old RAF base in Aghanloo, near Limavady.

Plumes of black smoke were spotted coming from the building, with a number of people nearby recording images of the incident.

It was extinguished by the Northern Ireland Fire and Rescue Service (NIFRS), who attended at 3.45pm and confirmed the cause of the fire was determined to have been 'deliberate'.

“Fourteen firefighters attended a small fire in an aircraft hangar,” said a spokesperson.

“We mobilised three appliances – one from Crescent Link, one from Limavady and one from Coleraine – and the fire incident was dealt with by 18.30.

Fiona Shannon recently travelled to Italy for a ceramics exhibition.

During the depths of Covid's assault on the creative sector, Portstewart artist Fiona Shannon found herself ready to leave her dream job behind. Liam Tunney talks to her about her love of connection, the draw of pottery and a welcome return to international exhibitions.

“There were no persons in the building and no persons were injured. The cause was determined as deliberate ignition.”

“The police were informed but there was no request to attend.”

A spokesperson for the PSNI said they were not investigating the cause of the fire.

“The fire was attended by NIFRS and no investigation was carried out by PSNI,” they said.

The airfield was one of the first built for the RAF's Bomber Command in August 1938 at a cost of £500,000 with the initial purpose of armaments training and coastal reconnaissance.

A squadron remained based at the airfield, flying patrols, until it was disbanded in June 1945.