Fiona Shannon recently travelled to Italy for a ceramics exhibition. 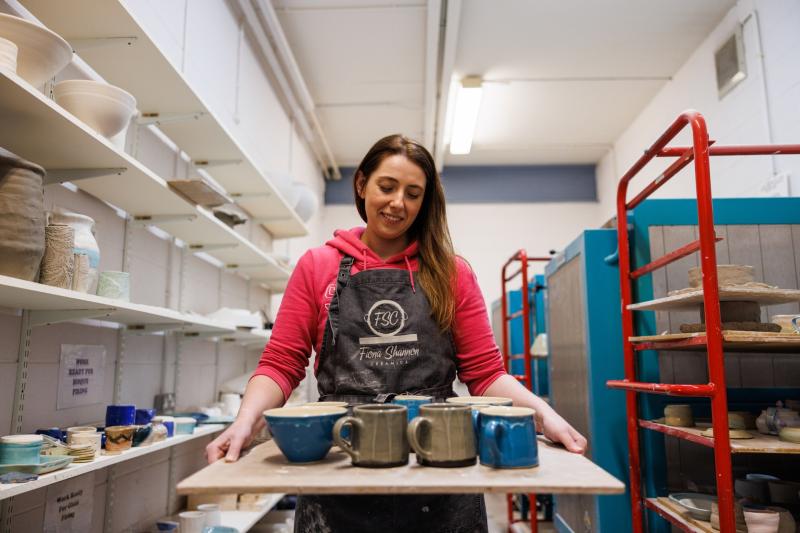 Fiona Shannon carries items from both her collections from the kiln room at her workshop.

During the depths of Covid's assault on the creative sector, Portstewart artist Fiona Shannon found herself ready to leave her dream job behind. Liam Tunney talks to her about her love of connection, the draw of pottery and a welcome return to international exhibitions.

The doors to Fiona Shannon's ceramics studio lie open, catching the final rays of summer as August draws to a close.

She is perched on a low chair just inside the door, eyes studying a laptop. Around her on the shelves sit samples of her hand-crafted work.

Next door, a larger teaching room stretches towards a further space that stores the heavy stone kilns that harden her creations from clay to pottery.

It's the idyllic scene of an artist immersed in her work, but two years ago, in the grip of the Covid-19 pandemic, Fiona felt it slipping away.

“I'll not lie, I applied for other jobs,” she told the County Derry Post.

“I probably went through days or weeks of thinking 'this is okay, I can make it' and then the next week there would be another restriction and you'd be thinking 'I've got to come up with another plan here'.

“I was constantly having to change the plan. I used to do workshops in person but had to re-adapt to doing 'workshops in a box' where I'd send them out to people.

“Recording videos for me to upload and edit myself, which I'd never done before, and I really struggled with it. I hope we'll never have to go through it again. 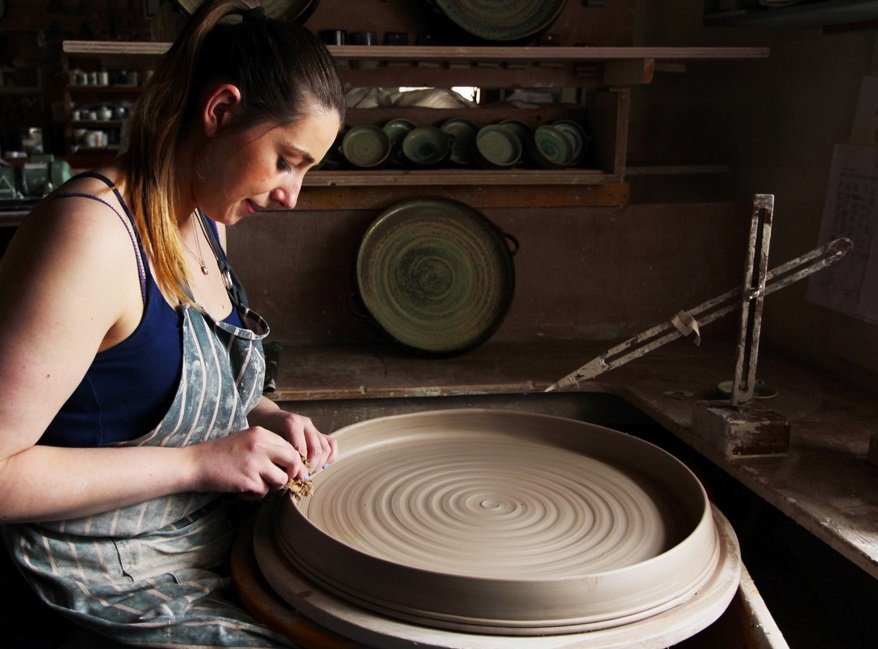 While at university in Belfast, a tutor was able to steer Fiona towards pottery.

“Once it got up and running though, I have to say the whole community were supportive. That Christmas was my biggest sales ever with everyone supporting local.

“I did apply for other jobs during that time, but I'm glad I persevered and that I'm still here.”

Art has been a feature of the Portstewart woman's life from an early age, her father's job as a technology teacher giving her ample opportunities for creativity.

After completing her A-Levels at Loreto College, Coleraine, Fiona headed for Limavady, where she completed a Foundation course in art at the technical college.

She then moved to Belfast, undertaking a three-year degree in contemporary applied arts, where one of her tutors recognised her talent and steered her towards pottery.

She then spent two years completing a two-year course in pottery skills and production in Kilkenny, where she was one of a small number selected for the course.

Now back at Flowerfields Art Centre, where she attended workshops as a child, the 30-year-old says things have come 'full circle'.

“There was another potter in here, who built a new studio out at his house and was moving on. It came up at the right time,” she said.

“After I'd come home from Kilkenny, I had set up in my garage for a while, and was working by myself. I felt that I needed the distance of getting up in the morning and going out to work.

“Even the interaction with the reception staff and the cleaners; you don't realise until you're not leaving the house how important those relationships are. 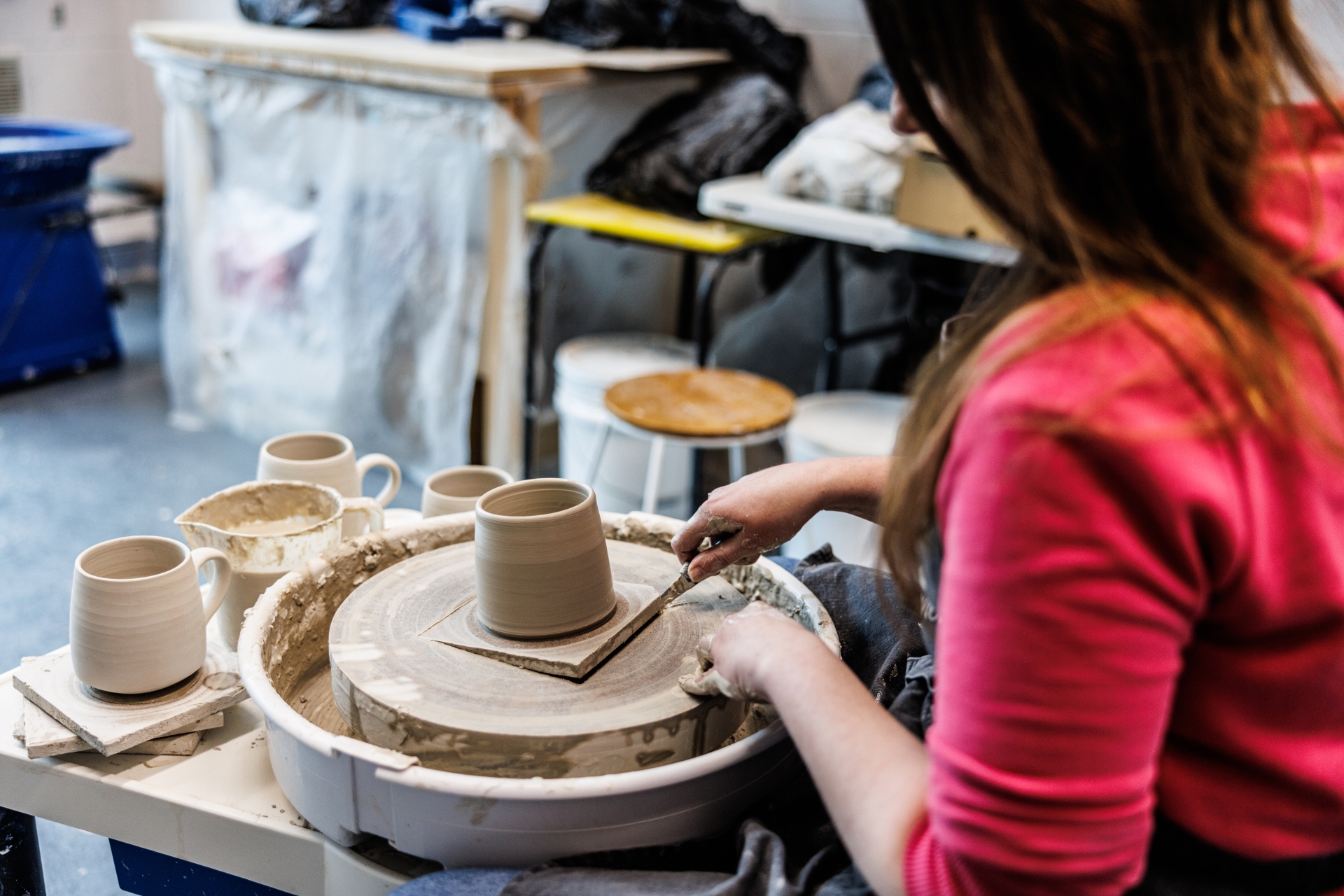 During Covid, a return to her workshop at Flowerfields Arts Centre felt a long way away.

“I was here about a year and then Covid hit and I had to go back to the garage, so it took me a while to adjust again.

“I probably didn't do much work for the first few months and then I got the funding from the Arts Council to develop some work influenced by my trip to China [in September 2019].

“That was invaluable at that time, because obviously no one was spending money, people weren't sure which way things were going to go, but eventually I started to sell stuff online.

Fiona held an open day and workshop at her studio last month, allowing the public to come in and experience life in a pottery workshop.

The interaction with others is something she had craved throughout the Covid-19 lockdown.

“Being an artist is such an isolating job, so when you get people into the studio and they're excited, creating conversations, it creates such a buzz and re-energises you as an artist,” she said.

“It can be lonely, and sometimes you forget why you're doing it. It comes so naturally to me, but whenever I'm teaching I have to explain why I'm doing it and what the purpose is.

“People get to come in, watch me work and ask me questions about my work. I can chat to them a little bit about my own experiences and I'd have a lot of firsts and seconds for sale.” 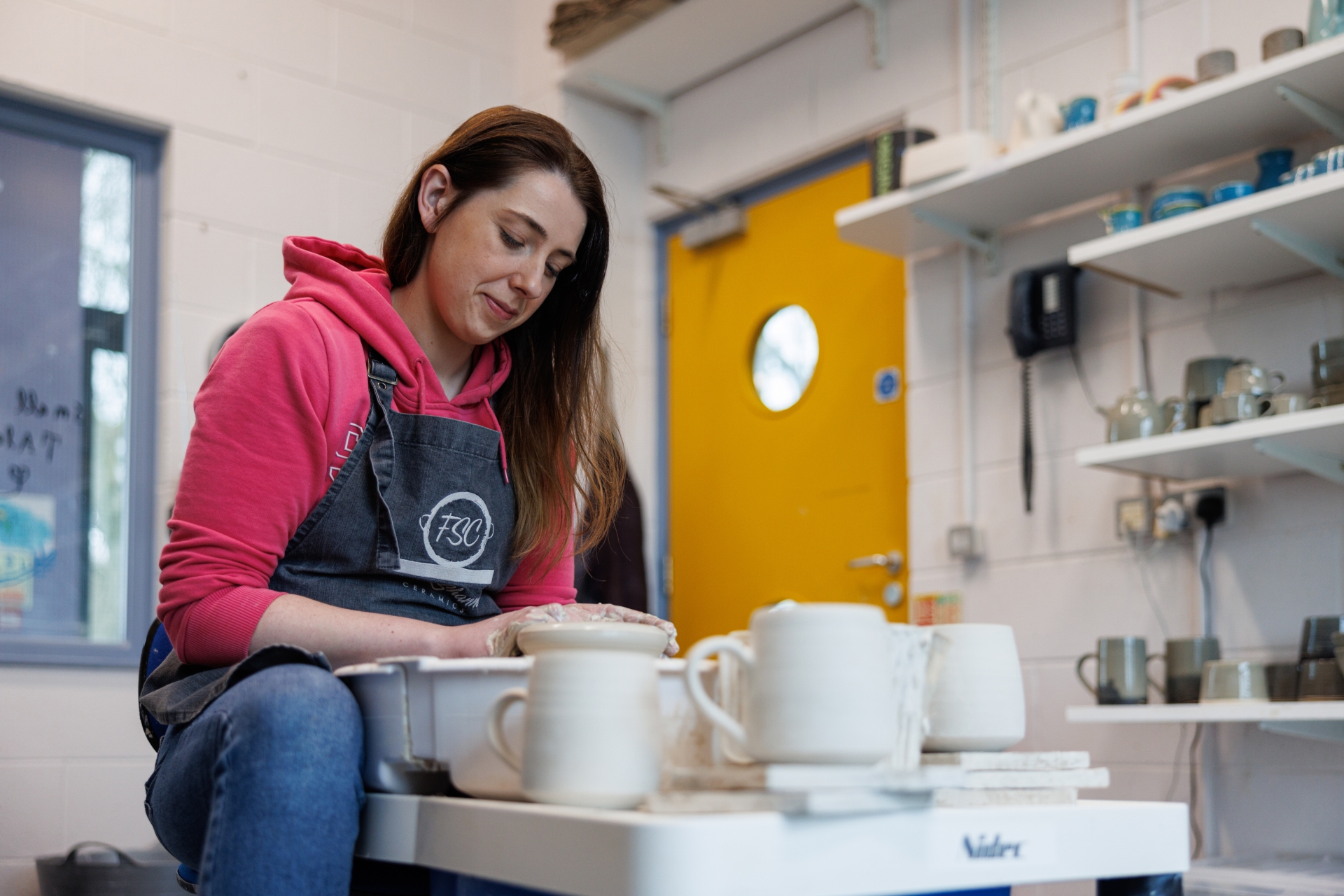 The former captures the sea blues and ripple effect of the Wild Atlantic Way, while the Causeway Coast collection showcases the earthy grey and black of the north west.

A fortnight ago, she jetted off to bring her collections to the Agrilla Italia ceramics show in Faenza, a city in Italy's north east.

The trip marks Fiona's first international exhibition since the onset of Covid-19.

“I've been to a couple of fairs and markets around Ireland but this will be the first trip abroad. It's an international ceramics market,” she said before heading off to Italy.

“There will be lots of demonstrations and workshops going on; it's one of the biggest in Europe, maybe 80,000-100,000 people come over the three days.

“There are 20 Irish potters going out. We were all selected by the Agrilla Italia committee to go out, so we're all very different ceramic artists and there are about four or five from the North.

“It will give me a good opportunity to see what Europe has to offer and hopefully I'll sell a good bit of my work there and not have to bring anything back with me.

“They're from all over Europe and all over the world, so it's a good opportunity to connect with other people and exchange experiences and techniques.” 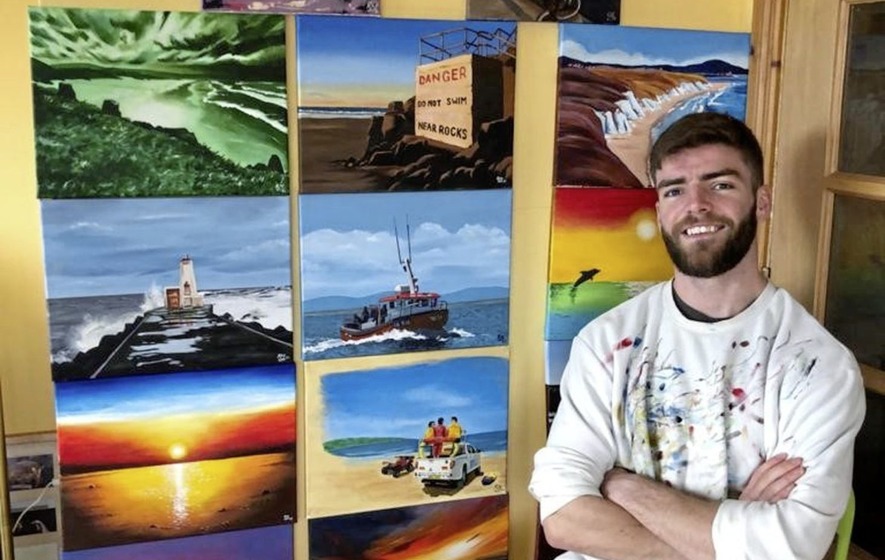 Ruairí Mooney is one of a number of North Coast artists making their mark.

Fiona joins a burgeoning troupe of artistic talent across the North Coast, and she feels the post-pandemic landscape has allowed creativity to flourish.

“In the last few years, a lot more people have got the confidence to come out and develop as an artist. It's now more acceptable to do it as a full-time job,” she said.

“Even a few years ago, it wouldn't have been. People still do ask me if I do this full-time. Maybe Covid gave people a push to realise what they want to do full time.

“People are getting a sense of enjoyment from their work, instead of just getting up and trying to earn a living, that you're walking out at the end of the day with a sense of fulfilment.

“You're excited to get back into work the next day because you've been inspired by something that you've seen or to get your hands back on a pot that you were working on yesterday.

“It's often whenever you're not in the studio that you come up with the solution to a problem, thinking about it when you're out walking even.

Ryan and Andy hit the headlines last year after recovering an engagement ring.

“That's why you have to give yourself the space and time and not put pressure on yourself every day, because it's only when you take the pressure off that the good work comes.

“Whenever you're just stressed the whole time – developing work to be sold – it can put a limit on your creativity and you just can't produce.”

More information on Fiona's work can be found on her Facebook page, with details of workshops on the Flowerfield Arts Centre Eventbrite page.