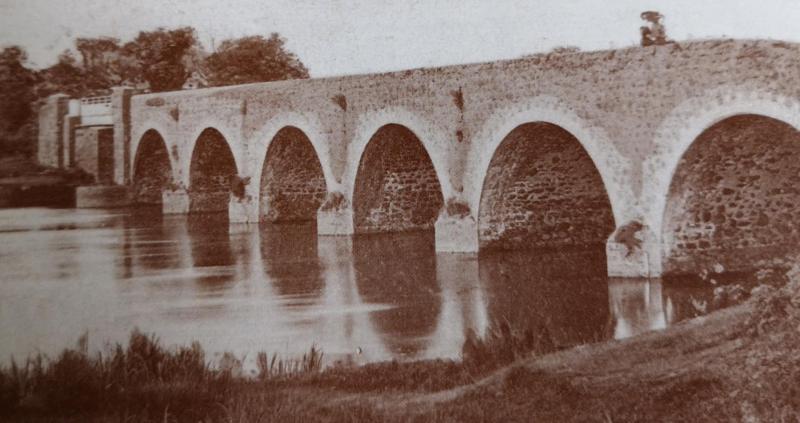 A single grey sandbag hangs over the sizeable 'Road Closed' sign. Cones are spread across the road, with orange perimeter fencing further up on the incline.

Vans and a yellow digger can be seen in the distance, partially obscured by the low walls of the bridge itself. The rattle of construction echoes down the river.

Traffic lights continue to operate, a token gesture in the absence of any vehicles to direct.

The Bann Bridge, outside Kilrea, is now entering the third week of its five-week closure to allow maintenance to be completed.

Works to waterproof the bridge deck and wingwalls, as well as repair work to the parapet deck are being undertaken to extend the lifetime of the listed structure.

The current scheme will be completed by the Department for Infrastructure (DfI) at a cost of £225,000, over 112 times the price it originally cost to build the bridge back in 1783.

Before the bridge existed at its current location, a ferry crossing was in place at nearby Portna, recorded by the Taylor and Skinner Map of Ireland in 1778.

The road on both the Antrim and Derry sides of the crossing is still known as the 'Portna Road', and ferries were also in place at Newferry, Agivey, Toome and Vow.

The Bann Bridge itself was later constructed further downstream – at its current location – in 1783 at a cost of £2,000. 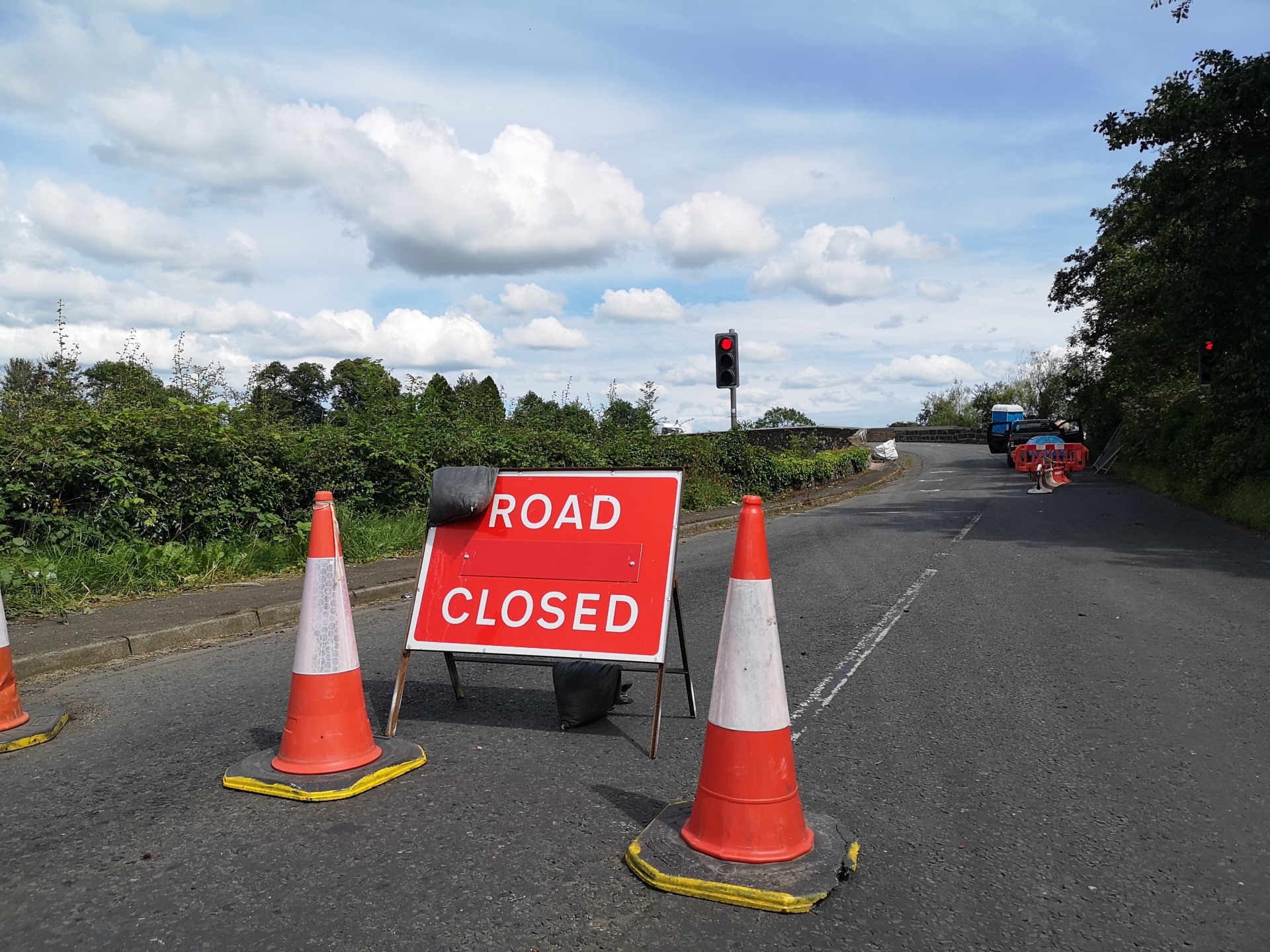 The bridge is currently closed for maintenance, causing disruption for those travelling in the area.

Portna did get to have some imprint on the new structure however, with stones from its eel weir used to construct the new bridge, for which Henry Roach was the architect.

The bridge comprised of seven arches, each 25 feet in span and 21 feet wide at the top, with the walls rising to three feet.

Robert Stuart, then an up-and-coming engineer from Belfast, arrived in 1852 to convert one of the arches into a drawbridge for navigation purposes.

Stuart enjoyed the welcome in Kilrea so much that he stayed, marrying the niece of prominent merchant John McKinney in 1855.

The Bann Bridge has been the scene of many incidents down the years, with a scan of local newspaper archive revealing the area to be the centre point for deaths, accidents and strike action.

In August 1901, a report from the Mid Ulster Mail tells of an incident in which a bolting horse left its rider hanging over the edge of the bridge.

“Whilst Messrs. James Keery and James Carson were driving a spirited young animal into Kilrea, the horse bolted whilst on the top of the Bann Bridge, with the result that both men were thrown out of the machine, and Mr Carson pitched over the range wall of the bridge,” it read.

“Happily, there were two pairs of stout reins attached to the horse and both men had a firm grasp of each pair.

“As Mr Carson was thus enabled to hold on whilst Mr Keery kept the spirited animal within bounds with the other pair.

“By some supreme effort, Mr Carson, who was dangling over the range wall above the turbid waters of the Bann, managed to scramble up and gain a firm hold of the parapet of the bridge.” 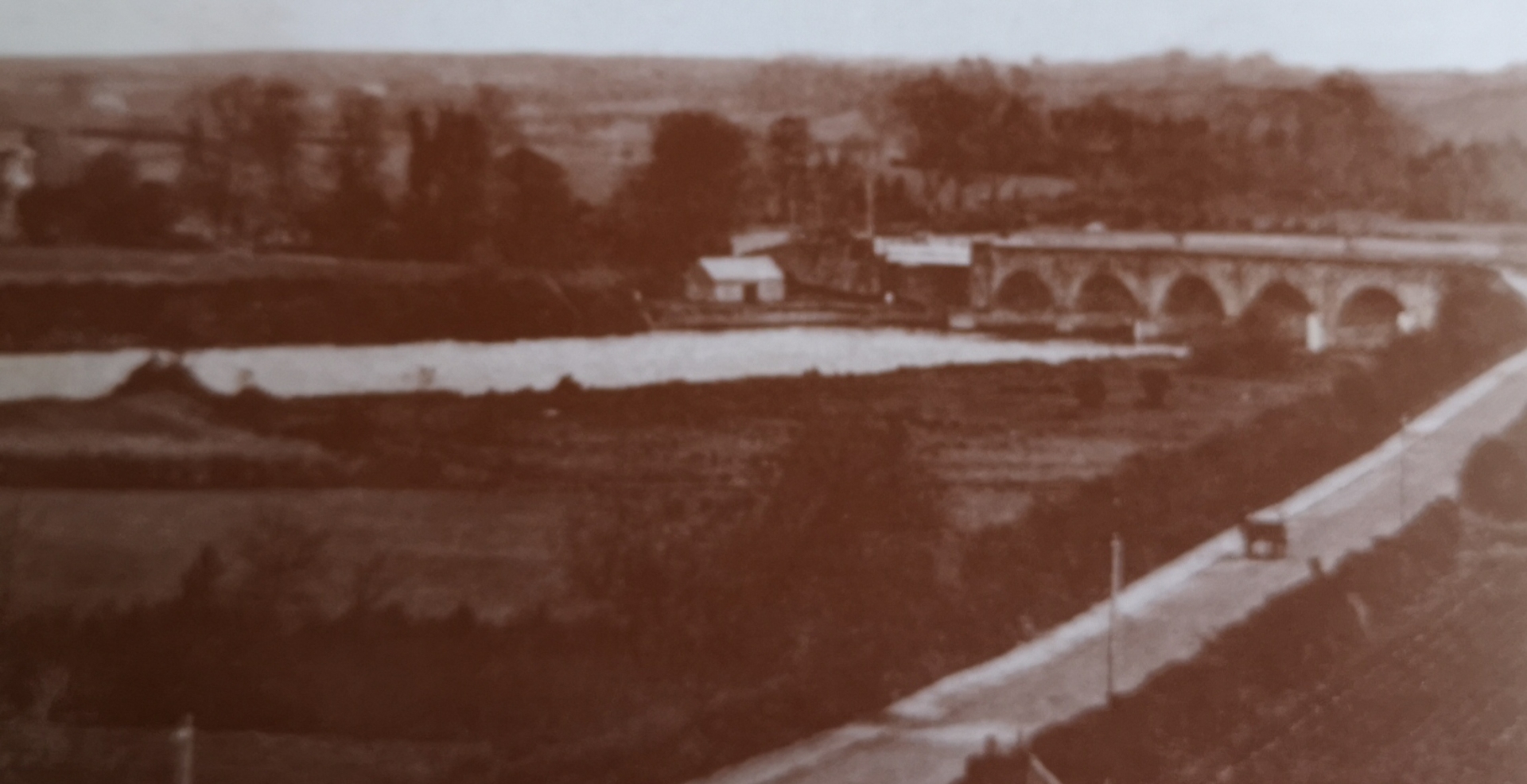 Crossing the bridge from the County Derry side, with the manse of Rasharkin Presbyterian Church seen on the left of picture on the far bank.

In July 1902, a man described by the Coleraine Chronicle as the 'ballad-singing type' drowned in the Bann close to the bridge. The incident was witnessed by a local fisherman.

“A case of drowning occurred on Wednesday evening in the Bann, in close proximity to the bridge that spans the river on the road from Kilrea to Rasharkin,” it read.

“It appears that a man of the ballad-singing type, whose name is not known, undressed at the Quay on the County Antrim side to have a swim, about...four o'clock pm.

“Mr John Blair, who was fishing a short distance below, was at first much amused at the bather's ability as a trick-swimmer, which art he seems to have thoroughly acquired.

“Struck with the length of time the man remained in the water, Mr Blair told him he was long enough there, as he had known as good swimmers as he drowned.

“Instead of heeding this wise counsel, the man continued cutting capers in the water. Eventually he did make for the shore, but when about three yards from land he sank, re-appeared and then sank again.”

Strenuous efforts were made to retrieve the man's body, but the report ends by saying that “up to the time of writing their efforts have not been successful.” 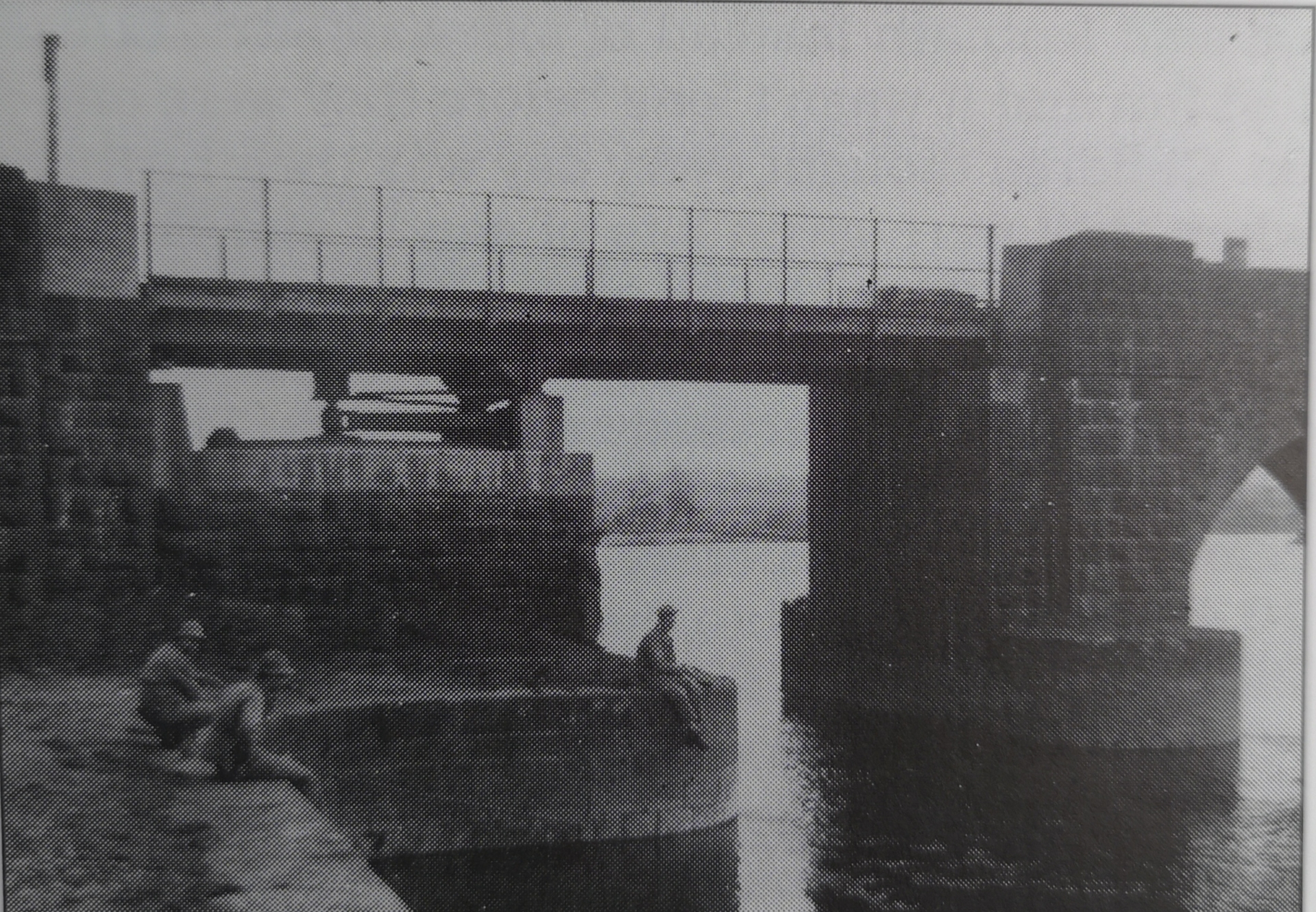 American soldiers fishing on the County Antrim side of the Bann Bridge in 1942.

In May 1959, a motorist was fined after his car struck a police constable on the bridge, breaking his arm in the process.

“John Charles McKiernan (17), Maghera Street, Kilrea was charged with driving dangerously, failing to stop after an accident and failing to report an accident,” read a report in the Belfast Telegraph.

“Special Constable Robert McCaw said that when on duty at the Bann Bridge on the night of February 11 he stopped a van and started to talk to the driver standing at the driver's door.

“A Land Rover approached from the other direction, struck him on the right arm, swinging him round against the side of the van, and drove on without stopping.

“His arm was broken and he was detained in hospital. He still had to wear a plaster cast.

“McKiernan said in evidence that he drove over the bridge on the night in question, but did not recall striking anything, nor of hearing a thump.”

The Land Rover belonged to a co-accused, James Brizzel of Lisnagrot Road, who was charged with aiding and abetting.

Brizzel backed up McKiernan's account that the vehicle had been 'about a yard from the Special Constable when he passed him'. The judge found both guilty of the charges.

In August 1951, the Ballymena Weekly Telegraph reported on the inquest that followed the death of eight-year-old William Sherwood Holmes at the Bann Bridge, returning a verdict of 'accidental death'. 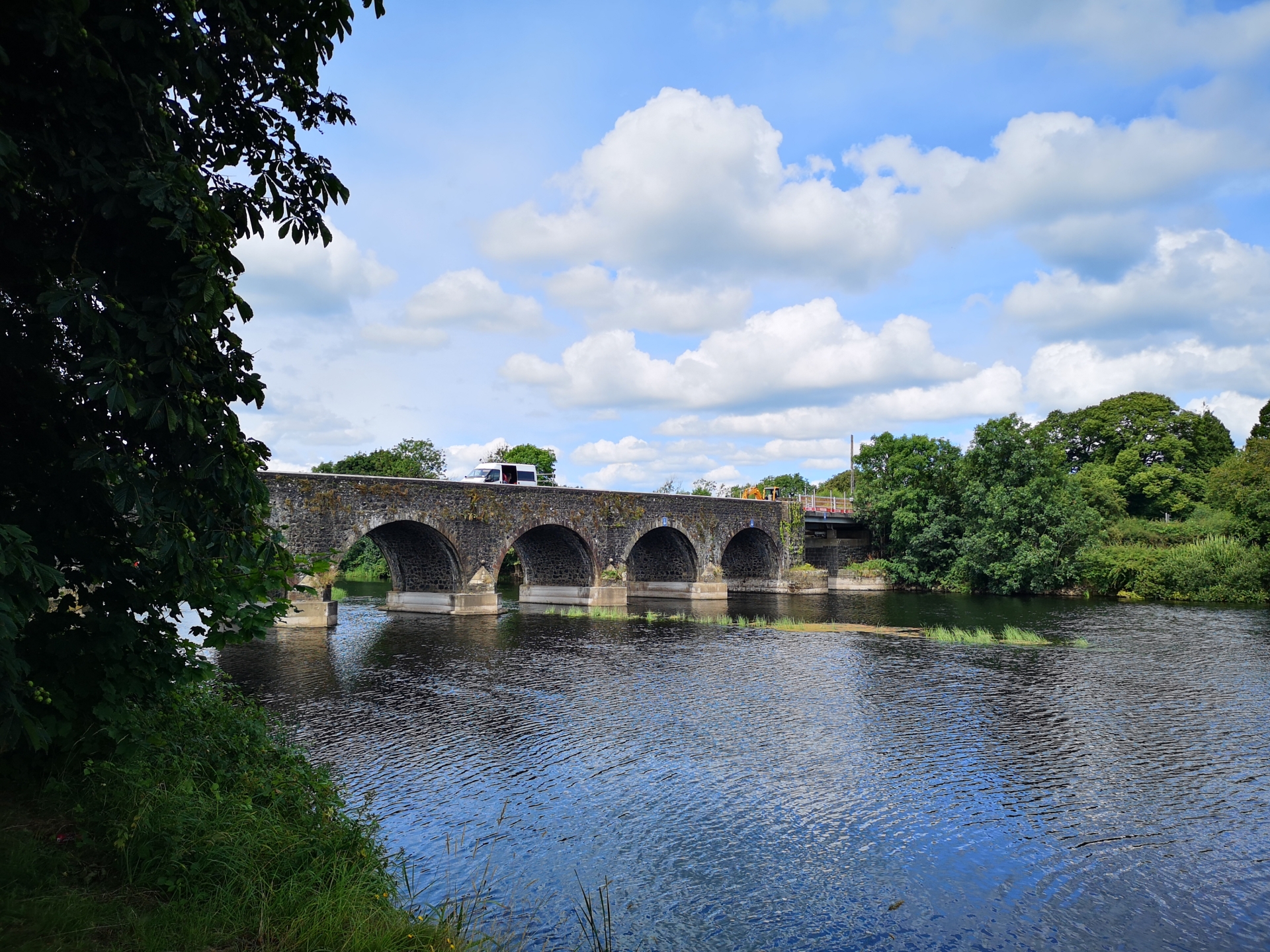 The ongoing work is set to extend the lifetime of the current structure at the Bann Bridge, Kilrea.

“The youth lost his life while bathing with a companion in the River Bann at Kilrea on Monday, August 20, the body being recovered from the river a week later,” it read.

“Evidence was given by Alistair McKinlay, Kilrea...that on the morning of August 20 he suggested they should go for a bathe at the foot of the garden, where there was a lake.

“He put the deceased off by saying the water in the lake was not suitable, but the same afternoon they decided to go to the River Bann at Kilrea Bridge for a bathe.”

On the way there, Alistair had asked William if he was a 'good swimmer', with the report stating the boy had replied that he was .

“Witness was first into the water, swimming up to the shoulder of the quay and back again to the steps. Witness was a fairly good swimmer and surprised by the backdrift.” continued the report.

“Witness called to the deceased... to be careful, and had just reached the steps when deceased dived into the water over his head.

“Witness then walked on up the pier towards where the deceased was in the water, and suddenly the latter shouted something, but the only word the witness caught was 'cramp.”

The inquest heard that Alistair had made frantic attempts to save his friend, diving in and trying to pull him ashore to the point where he became 'exhausted' and had a 'temporary black-out'.

The boy informed William's mother and a search got underway for the body, but it was not recovered until August 27, when Patrick Darragh of Movanagher, found William's body 100 yards from the bridge.

During the 1970s, the bridge found itself blocked as farmers took action in the 1977 United Unionist Action Council (UUAC) Strike.

The Belfast Telegraph of May 11 1977 reported that 'in County Londonderry, tractors blocked the Bann Bridge at Kilrea'.

The Bann Bridge has been back in people's minds over the last fortnight as the inconvenience of a round trip to Portglenone or Agivey takes its toll.

Just want her back , surely some her will start a wee ferry service pic.twitter.com/jPpe3fNKuP

That inconvenience is temporary, and a timely reminder that the bridge has stood for over 200 years.

It has withstood periods of unrest in the nation's history, witnessed two World Wars, the onslaught of the most recent 'Troubles', and viewed tragedy, amusement and innovation up close.

The Bann Bridge is set to reopen to traffic on August 22, almost 71 years to the day that young William Holmes tragically lost his life in the waters below.

These kind of structures can often be taken for granted, but harbour a rich and varied history.

In the meantime, just leave some extra time for your journey.