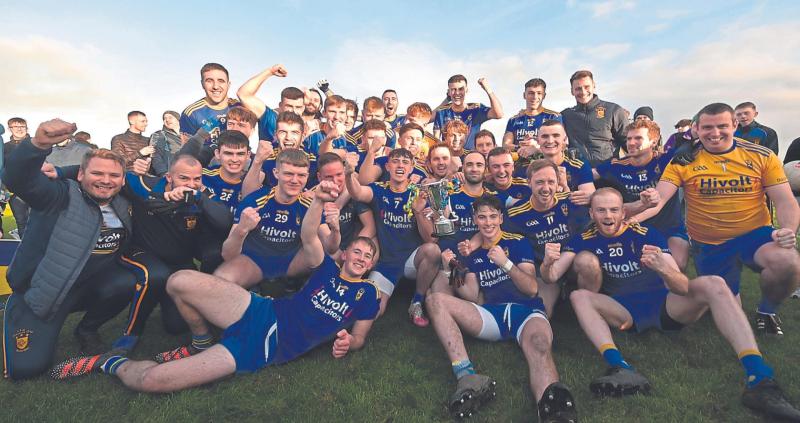 Last year it was Steelstown who lifted the new-look Sheridan, Bateson, Lee Cup in a season that saw them crowned All-Ireland champions at the end of the swashbuckling march to Croke Park.

Hugh McGrath’s men are now in the senior ranks, but the race for this year’s bragging rights begins on Sunday, with four group games down for decision.

In a change from last season, there are only 10 teams in the Intermediate Championship, arranged into two groups of five.

The top three teams in each group will advance to the quarter-final stages, with the remaining teams playing off to keep themselves in the title race.

With four teams being relegated from the Senior Championship at the end of this season, teams will have an extra incentive this summer to take the title with a more competitive field in 2023.

Greenlough manager Darren Craig will be able to call on Niall Loughlin after his exploits in Derry’s Ulster winning summer.

He missed the game due to a pre-arranged holiday and with Enda Lynn also out, it leaves Greenlough looking for a new attacking dimension.

Greenlough were the kick of a ball away from retaining the title last season and welcome a Glenullin team on Sunday managed by Paddy Bradley.

Glenullin lost a relegation play-off to Slaughtmanus in last year’s campaign, but a restructure of competitions saved them from the fall to the junior ranks.

Goals from Enda Lynn, Ruairi Henry and Caolan Tohill weren’t enough to save Greenlough from a 0-17 to 3-7 defeat in Glenullin when the sides met on the opening weekend of the league season.

Glenullin, who have been without Eoin Bradley this season, have rotated the goalkeeper jersey between Niall and Gerard O’Kane in the early part of the season, but former All-Ireland minor winner Eoin McNicholl has been mixing it with his role as Swatragh coach.

Inconsistent sums up both teams so far, but they will be knocking about the latter stages with bigger prizes at stake.

Greenlough will be without Enda Lynn, but with Loughlin back in business, Greenlough could start with a win at home.

The two teams at the foot of the league lock horns this weekend as they step into the early stages of the championship.

Slaughtmanus were full value for their win over Glenullin in the relegation section of last year’s championship and will once again be looking to Gavin McShane and Conor McGee to carry their attacking threat.

Like all three opening games on Sunday, Lissan’s trip to Slaughtmanus is a repeat of the season’s first weekend when 1-5 from Conor Loane was the difference for the Tullynure men in a 1-16 to 1-12 win.

Portglenone man Gareth Kelly is in charge of Lissan this season but it proved to be the only win of a testing campaign.

Likewise, Slaughtmanus, under manager PJ McGee, had one single victory (1-8 to 0-10 at home to Glenullin) and will need a change of fortunes this weekend.

They have not been helped with the loss of retired duo John Robertson and Kyle Gallagher from the heart of their team.

Lissan have had underage success in recent years, with former Derry minor captain Iarlaith Donaghy at the heart of their plans.

A tight game to call, but if Ciaran Quigley, Joey Devlin and Loane can keep the scoreboard ticking over, and away win is a possibility.

Drumsurn have a bye and will make the trip to Glenullin in Round 2.

Peter Murphy was part of Claudy’s winning team of 2005 and he enters this year’s race in charge of the Wolfhounds who host league champions Foreglen this weekend.

It’s a repeat of the opening game of the season when Foreglen were 1-17 to 1-9 victors on home soil.

They also had a boost with a return from Australia for Darren O’Kane who gives them another driving force in the crucial central third.

Underage players Tiarnan O’Connor and Séa Watson have also moved into line, giving them freshness with O’Connor already having experience with Derry minors under his belt.

Liam Downey has also blossomed into a regular in defence with Oisin Duffy at its centre.

Limavady reached the semi-finals last year and are once again looking to an attacking unit that contains Cormac Quigley, Richard King and Ruairi Hasson, with Oisin Hasson also used as a playmaker from centre back.

They’ll need a big performance at midfield where Foreglen are traditionally strong with Eoghan Duffy, Liam O’Hara and Mark McCormack.

Cahir O’Connor kicked 0-7 from play when the sides met in the league and it should take the scoring burden off the evergreen Kevin O’Connor up top.

Foreglen won’t be far off in the title race and should start with a victory.

The Broagh will host an intriguing clash with back-to-back junior champions Desertmartin taking on a Castledawson side determined to add to their tally of three titles in eleven seasons.

Niall Jackman’s side were nine-point winners when the teams met back in April, but star man Lachlan Murray was on county duty.

Since that, he spearheaded Desertmartin U19s to last night’s county final with Slaughtneil and Kevin O’Neill will be plotting his hand with him on board.

From last year, Conor Murtagh, Simon Matterson and Ryan McElhennon have being brought in from their underage production line.

They won’t be able to call on the services of Callum Ormsby who is still recovering from the knee injury sustained last season.

The ‘Dawson won the title in 2010, 2014 and 2016 but have lost to eventual winners Steelstown, Foreglen and Greenlough in the recent past.

A 15-point defeat in Drumsurn was the only blot on their season that went to the last day when a home draw with Foreglen wasn’t enough to take the league title.

Niall Rafferty was a useful addition to the heart of their defence last year, where he operated with Niall and Ruairi Keenan in front of goalkeeper Aidan McLaughlin.

Niall McNicholl, Rian Connery and Odhran Mullan were the mainstays around the middle. In attack they brought Shea McKenna and Cormac Mullan into the fray.

Murray will bring a scoring dimension that will challenge the home side that may have the consistency to start the season with a win.

Joe Gray will be an interested spectator in Limavady, with his Faughanvale side – who have a bye this weekend – down to face Foreglen in the next round.