The late Niall Murray was air-lifted from his home to hospital having suffered cardiac arrest, aged 24.

The family of a young Dungiven father-of-two who died suddenly aged just 24 years old, are holding a charity walk in aid of Air Ambulance to mark the first anniversary of his death.

Niall Murray suffered cardiac arrest at home just two days before his 25th birthday. He had no previous history of heart disease.

Niall's mum Brona, who is an experienced theatre nurse, spoke to the County Derry Post about how the Air Ambulance came to Niall's aid.

“We called 999 and a neighbour is a paramedic and so we got an air-way into Niall first and we were able to do CPR, then the police arrived and then an ambulance.

“I don't know who sent the Air Ambulance but it landed at the back of the old police station in Dungiven here, and set off running on foot towards our house. A neighbour lifted them in the car and they got here and just took over straight away.

“The Air Ambulance is consultant led so the paramedic and consultant then took over Niall's care.

“Even when we got the defibrialtor onto him we couldn't shock him. It was an unshockable rythm and so it was the drugs that the Air Ambulance team gave Niall that brought him back to us, that gave him a heart beat,” said Brona.

Niall was then taken by Air Ambulance to the Altnagelvin ICU, and later transferred to the Ulster Hospital in Belfast where he eventually passed away a week later.

“Even though Niall didn't survive - the drugs the Air Ambulance team gave him allowed us a week with him, and that allowed us to donate his organs which was very important,” added Brona. 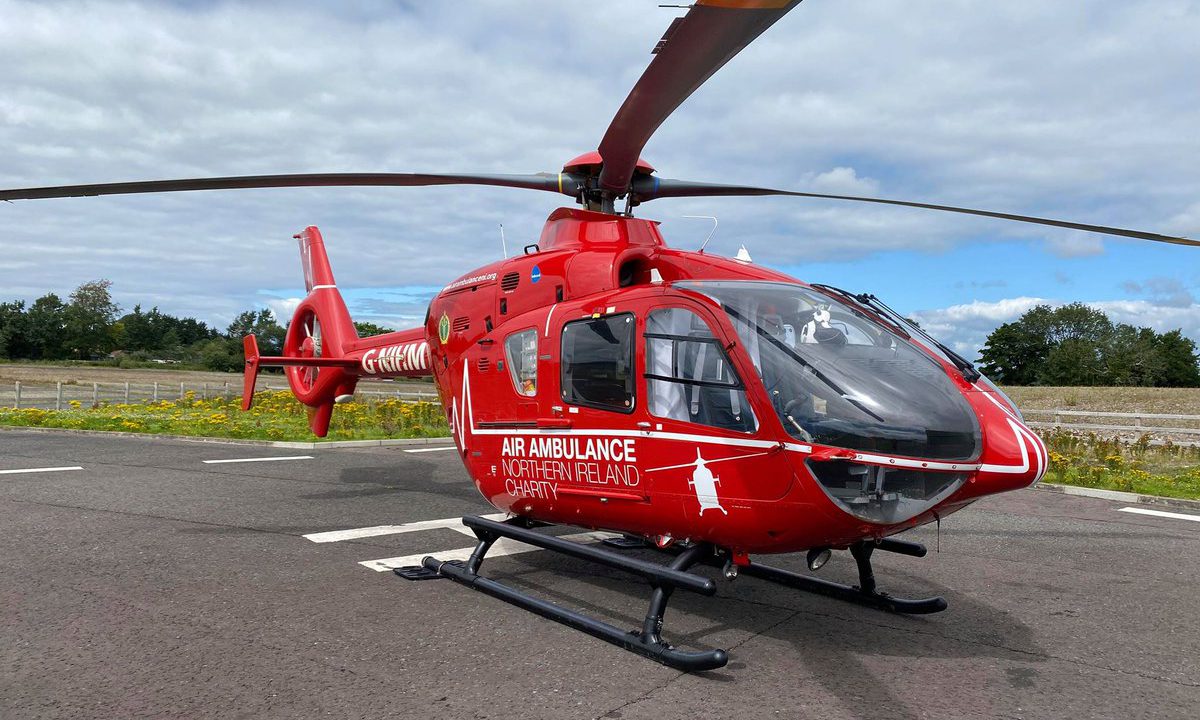 The Air Ambulance is reliant on charity donations.

The Murray family were undergoing unimaginable shock at what was unfolding, and Niall's partner Sinead and daughters Enya and Olivia were at the centre of their concerns.

“Those days were crititcal in a sense of the organ donation and for us all to adjust to the shock of what was happening. Niall's partner Sinead and Olivia were able to be in with him – she was just coming up to four months old at the time, and Enya would have been was five.

Niall's family could have raised funds for any of the emergency services that helped them last August, but the Air Ambulance is totally reliant on charity donations and so they opted to donate to their operating costs.

“Whoever took my call at ambulance control that day were amazing. Even though I'm a nurse, with loads of experience, they took me through every step. The way you see it on TV, that's how it was. They counted me through every step and honestly I don't think I could have done that without them, and obviously the neighbours that helped me,” added Niall's mum.

“They talked me through every step that day, things that I would be teaching at work, and telling colleagues. They were brilliant – I don't know who the lady was on the phone but the help was just brilliant.

“You are just in shock, and that help from them was critical. It was only afterwards that I realised how important it was. There was a lady police officer there that day called Gail and she was just brilliant particularly because once she arrived I withdrew from the CPR, and once the paramedics came she came out to us and was very much involved in looking after us. She was just amazing.”

Brona describes her youngest son as a 'cheeky chap', “Niall was just great. He loved his cars and his two girls. He said after Olivia was born that every morning was like Christmas morning, he was just so devoted to Enya and Olivia. He was a cheeky wee chap who loved life, loved his friends and Sinead and the girls.

“Niall had great friends, and they still call and visit Sinead and call with me which is lovely,” said Brona.

Holding the walk on the day of Niall's first anniversary will not only raise funds for charity, but also allow Niall's friends and family to come together and just talk about him and share the day together while raising much needed funds for the cause.

“The walk is actually the day of his first anniversary. That makes it significant really to us all.

“I'm really hoping that people from all over will be able to come out on the day and just be there with us, and remember him.

“We can't change the past. Nothing we will say or do will change what has happened here. I just wanted something positive to come out of his first anniversary rather than dreading it, and so we welcome anyone at all to come out with us.

“People can walk, run, cycle, take their dog, push a pram whatever they want to do. We will just be happy to get people out and maybe we can talk about Niall and tell stories, and just physically be there,” added Brona.

The walk will take place at Banagher Dam on Sunday, August 7 at 2pm. Donations to the fundraiser can be can be made via Facebook.