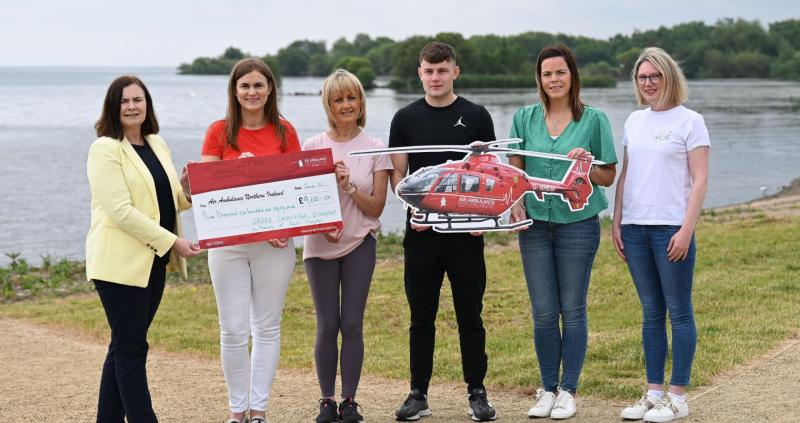 Staff from the Department of Agriculture, Environment and Rural Affairs, along with their families and friends, challenged themselves in April this year to increase their personal daily steps and raise valuable funds for Air Ambulance NI.

The inspiration behind this challenge was Kevin Murphy, who was highly esteemed by his colleagues in DAERA and by his community in Magherafelt. He sadly passed away unexpectedly in December 2021.

His colleagues wanted to do something positive to commemorate his life and in doing so raised £9,680 for this local life-saving charity. Thanking the staff whose efforts raised the money, Kevin’s wife Siobhan Murphy said:

“One of Kevin’s mottos was to “Live every day as if it were your last”. He did just that by being very active. He would be very proud indeed of what this challenge has managed to achieve for so many.”

The service operates seven days a week, from 7am – 7pm and since its inception in July 2017, HEMS have been tasked to over 2,916 incidents.

When such incidents happen, time is critical in saving a person’s life, brain or limb and the Air Ambulance NI HEMS has the advantage of being able to reach any part of the region within 25 minutes delivering critical care interventions at the scene, before transporting the patient to the most appropriate hospital for their injuries.

Air Ambulance NI aspires to raise £2million each year to maintain and sustain this service so public donations are crucial.

DAERA Minister Poots MLA also thanked his staff, saying: “I feel very proud of my staff and their families and friends who challenged themselves in April to raise these funds and to be more active.

"In total, 114, 233,729 steps were recorded by most of those who took part. That equates to 1,831 marathons or 47,972 miles. The physical and mental health benefits they gained in this challenge have been fantastic.”

Breige Mulholland, Air Ambulance NI Head of Operations & Finance said: “I want to thank DAERA for their tremendous support over the month of April.

"The first quarter of 2022 has been the busiest since the service began, with an average of two call outs each day.

"This donation will help to fund the service for nearly two days, potentially saving the lives, brains and limbs of four individuals right here in Northern Ireland. That could be anyone’s family member in the future.

"It is such an amazing gesture in Kevin Murphy’s memory.”