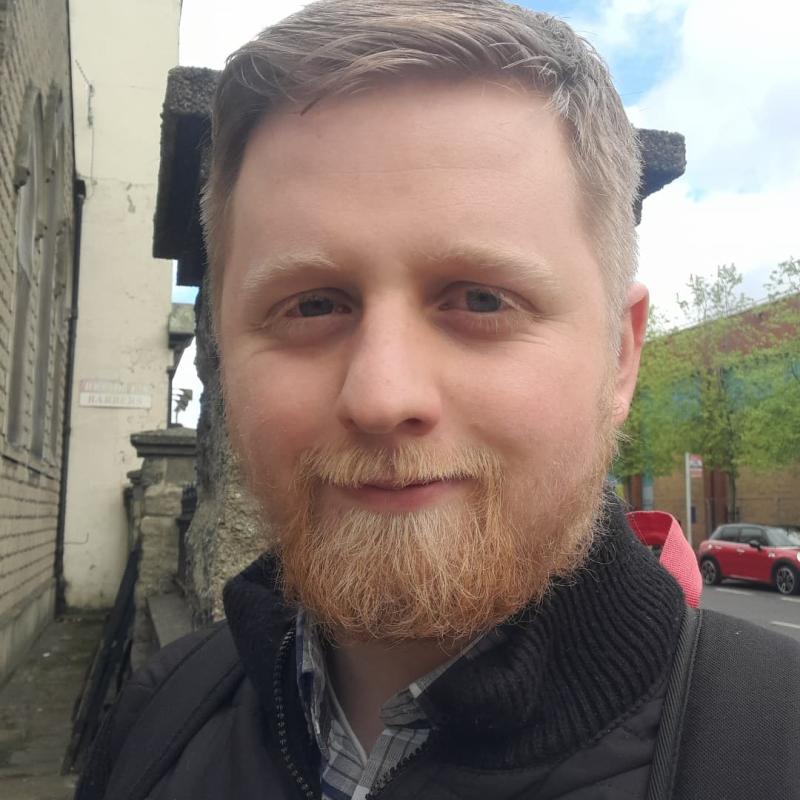 Gearóid Ó Dochartaigh, who is adjudicating this year's An Teanga competitions

Derry Feis is celebrating its 100th birthday this Easter. To mark the special occasion, the Derry Now is publishing a series of articles titled: Mo thuras go Fheis Dhoire Cholmcille 2022.

Today, Gearóid Ó Dochartaigh, who is adjudicating this year's An Teanga competitions, describes his personal journey to Derry Feis 2022.

Like many of the young people taking part, Feis Dhoire Cholmcille, 2022 is Gearóid's first experience of the iconic cultural event, and he is reassuring competitors they do not need to be nervous.

The born and bred Derry man, who is a teaching assistant at Dublin City University, said: “Don't be nervous at all. To even enter the competitions is brilliant because taking part in Derry Feis is a good learning experience in itself. Don't be nervous because we are all in this together. I just want to see your pride in speaking Irish in the different competitions. I want to hear what you will do.”

A past pupil of St Brigid's Primary School, Carnhill, he began learning Irish when he went to St Columb's College.

Gearóid recalled: “I did not come from an Irish-speaking background. I was the youngest in the family and the first one who got the opportunity to learn Irish.

“I did it mainly as a way to honour my parents but, within the first two or three weeks at St Columb's, I just thought, 'I am on to something here'. Picture an 11 year old, going on 12 year old, thinking, 'This is absolutely class' and I could do nothing but get As and A*s from first year to GCSE.

“Irish was the one subject I actually enjoyed at school, to the point where, during my parent-teacher meeting in fourth year, my father was given warnings by every other teacher to tell me to start concentrating on their subjects.

“The only teacher to actually give me rave reviews was my Irish teacher, Ms Patrice McConnell. It got to the point I had to be scolded almost into concentrating on my other subjects. I won the best GCSE Irish for my year and then a joint languages award for AS Level as well,” smiled Gearóid.

Gearóid went on to study A' Level Irish at Thornhill, whilst also having regular Irish conversation classes in St Columb's with popular gaeilgeoir, Gearalt Ó Mianáin.

“I have never been involved in Feis Dhoire Cholmcille before,” said Gearóid. “I always associated it with Irish dancing. Like many young people in Derry and beyond, this year will be my first experience of the event.

“I am very excited about having been asked to adjudicate An Teanga because it is actually my first big interaction with Irish speakers in Derry, young people. It will be nice to see what the future is going to hold for the Irish language within Derry City itself.

“I am glad it is only now I have been asked to adjudicate because I am at a very good stage with the language, where I feel I can be a good help to the young people. This is a very exciting prospect and I am really really thankful for it.

“I would say to competitors to take their time. There is no need to rush and if you need a breather, that is grand. Please do not worry,” said Gearóid.

Turning to the special An Teanga centenary competition – primary and post-primary entries welcome - a 300-word manifesto for the Irish language in the next 100 years, Gearóid said competitors could think about how they wanted to see the Irish language when Feis Dhoire Cholmcille was celebrating its bicentenary.

He added: “Specifically, who should be speaking Irish and what way will the country be then?

“What will we be doing with the Irish language in 2122 that we can't do right now? How can Irish be good for the country? Do you think Irish could unite the country? Could it make people happier, do you think?

“I would just like to encourage young Irish speakers to come along and have fun. I look forward to meeting you and speaking Irish,” said Gearóid.

Anyone interested in entering any of the An Teanga competitions at Derry Feis can contact: Kathleen McGlinchey on: 028 7126 8528 or Míceál-Piaras Ó Ceallaigh: 0044 7999497103 or email: teangafeisdhoire@gmail.com.

All information on Feis Dhoire Cholmcille can be read at: www.derryfeis.com or on the Derry Feis Facebook page.