Derry camogs come up short despite gallant comeback against Meath

The Royals had a greater spread of scorers over the hour 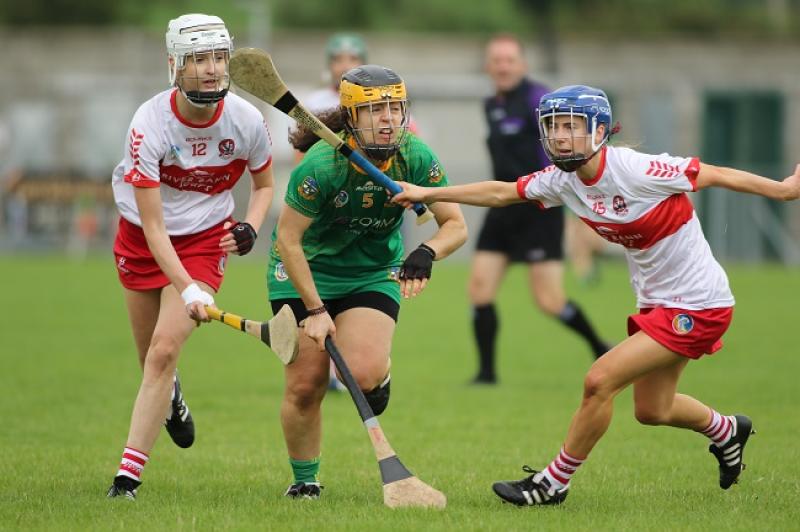 Derry's quest for a first All-Ireland intermediate title since 2012 continues after their gallant fightback wasn't enough to topple Meath on Sunday afternoon in Inniskeen.

The Royals led 1-6 to 0-2 after 21 minutes thanks to a goal from Maire Kirby and held Derry scoreless for 14 first-half minutes.

Derry had a focal point in Aoife Shaw, but they relied on Aine McAllister for scores. A more physically strong Meath team moved the ball quickly and were able to work their scores that bit easier.

It took a vital block by Sinead McGill, a late call up for the unavailable Cliodhna Ní Mhianáin, to prevent player of the game Jane Dolan from registering an earlier goal.

Meath were dominant early on and clocked up six wides in the opening quarter. A second free from the ever accurate McAllister had Derry 0-2 to 0-1 ahead after seven minutes.

Grace Coleman plucked a long Maeve Clince delivery before swivelling around to score a fine point to put Meath ahead, 0-3 to 0-2, after 11 minutes, a lead they never surrendered.

Aoife Minogue and Coleman were involved in the move that led to Kirby's 12 minute goal, giving goalkeeper Niamh Gribben no chance after she was put through one one one.

Meath were 1-4 to 0-2 ahead at the first water break, with Shannon Graham coming out after with a heavily strapped hamstring injury she carried into the game.

An Amy Gaffney point on the run added to Meath's scoring purpose before a foul on Dervla O'Kane gave McAllister a chance to tap over an easy score from close-range. It was enough to change the direction of play.

Derry were back in the game by half-time with their first goal of the afternoon. A long free from Louise Dougan dropped in the square where Shaw was able to get inside Ellen Byrne before Dervla O'Kane finished the sliotar of the net.

Shaw won another ball into the Derry attack, leading to Graham – while on her knees – scooping the ball into the run of Mairead McNicholl who slotted over.

There was a question mark over the score at the break, with many in the ground feeling Therese Mellon's fifth minute shot had crept inside the post, but referee Barry Nea confirmed Meath's 1-7 to 1-5 interval lead.

Aine McAllister cut the gap to a point in the 32th minute before Meath struck with their second purple patch of the game.

Aoife Minogue sprinted through before slotting low to the net. From Niamh Gribben's puck-out, Meath went for the jugular with a darting run at the heart of Derry's defence, but Amy Gaffney's piledriver whizzed over the bar.

It left Derry facing a five-point deficit, but they replied with a 36th minute goal. It began with Aine McAllister thumping the ball into the danger area. Aoife Shaw did well to control the ball and find Dervla O'Kane. With green jersies around, she linked with Mairead McNicholl who was denied by goalkeeper Maggie Randle and Shaw's instinct saw her finish the rebound to the net.

Derry had been chasing the game from early on and two more Meath points from Dolan (free) and Sinead Hackett had the Royals 2-10 to 2-6 ahead.

There was a further setback for the Oakleafers when they lost Louise Dougan to a knee injury after being pulled to the ground by Amy Gaffney. After the game, there was a fear of a potential cruciate ligament injury from the initial assessment.

It still didn't stop Derry pouring themselves back into the game. Vice captain Megan Kerr played for Tyrone Ladies in Saturday's extra-time defeat to Cavan and was still going strong.  She won a free which McAllister pointed and it was 2-11 to 2-8 in Meath's favour at the second water break.

Meath won the corresponding clash of the counties last season comfortably. This was anything but. When Derry battled themselves back into contention, it morphed into a pulsating finale.

A high ball into the Meath defence was somehow won by Aoife Shaw who was fouled and McAllister tapped over the free. A minute later substitute Maria Rafferty did brilliantly in a ruck of players to come out with the sliotar, leading to a McAllister point from play and with eight minutes remaining, there was the bare minimum between the teams.

Two Dolan points put Meath back in command and she may have ended the game as a contest, but for a brilliant Niamh Gribben save and still Derry were coming hard at the game. A Graham point from the right wing left two points between the sides.

With time ticking away, Derry were going to need a goal. They huffed and puffed with all that they had, but it wasn't enough as Meath held on to book their semi-final spot.