Slaughtneil pick up second win of the season at Coleraine 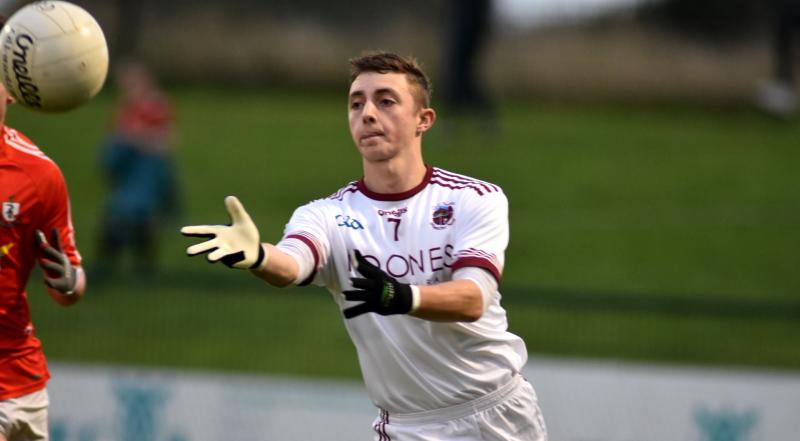 Keelan Feeney was among Slaughtneil's scorers in their win over Coleraine. (Pic: Mary K Burke)

Slaughtneil picked up their second win of the season against Coleraine on Monday night.

In a game of cat and mouse, where possession was everything, Shane McGuigan's 13th minute goal left the home side chasing and Slaughtneil had enough about them to keep the scoreboard ticking over.

As the first-half, with Coleraine unable to prevent Slaughtneil's kick-out strategy, they conceded and retreated completely.  With both teams playing the same patient brand of football, three booming points from distance by Aidan McGonigle gave the home side boosts at vital times.  The pace of Lorcan McMullen was causing problems for Peadar Kearney anytime Coleraine got him inside.

On the other side, an attack before half-time typified the pattern the the game.  Slaughtneil kept possession for close to two minutes before Brendan Rogers' injection of pace opened a gap and Christopher Bradley popped over to leave his side 1-6 to 0-5 ahead at the break.

The Emmet's may have had a goal earlier in the game when Shane McGuigan's pass put Ronan Bradley in the clear, but his well-struck low effort was brilliantly saved by Cillian Butler at full stretch.

When the game's only goal came, it was well worked.  Peter McCullagh's pass found Christopher Bradley and he slotted to Shane McGuigan who tucked his shot across Butler to the far corner for a 1-2 to 0-1 lead.

Coleraine were unable to stop the movement for Slaughtneil's kick-outs and eventually conceded, opting to filter back and tempt turnovers, with McMullen's pace a dangerous weapon on the break.

At the end of the third quarter, with Coleraine 1-7 to 0-6 in arrears, McMullen cut inside, but his shot was turned onto the bar by goalkeeper Antóin McMullan and Slaughtneil were off the hook.

A Keelan Feeney point from the wing and a score from Brendan McEldowney, after Fionnbharr McGuigan's kick pass to switch the play, did enough to give Slaughtneil breathing space in the final quarter.