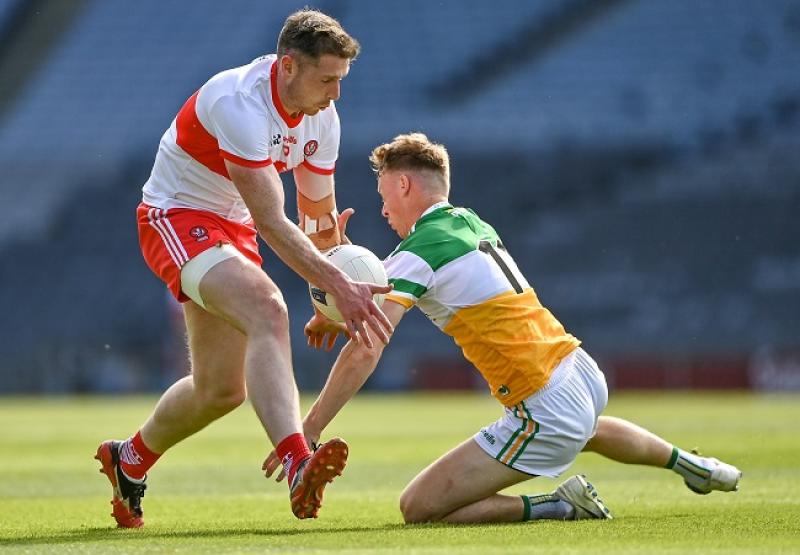 Derry ended their league on a winning note with a comfortable win over Offaly at Croke Park, going up to Division 2 as champions.

It was a day when they passed up a number of goal chances, including a 75th minute Shane McGuigan penalty, but never looked like anything other than winners.

Offaly won the throw-in and went on the attack, but when awarded a free goalkeeper Paddy Dominican was off target, the first of six first half Offaly wides.

Derry did well on their own kick-outs and squeezed Offaly at midfield, but took time to settle into the game.

Niall Loughlin's opener was followed up by a Shane McGuigans sideline and Derry went into a 0-5 to 0-1 lead by the water break, with Offaly not getting off the mark until the 15th minute.

The Oakleafers continued their dominance with Benny Heron putting Derry 0-9 to 0-2 ahead.

A goal from Eoin Carroll brought Offaly into the game, but straight on the kick0-out Emmett Bradley responded and Derry were 0-10 to 1-3 at the break.

Derry dominated the Offaly kick-out at the start of the second half, but four wides in the third quarter prevented them from pushing clear until later in the game.

Oisin McWilliams, Ethan Doherty and Conor Glass tagged on points, with skipper Chrissy McKaigue getting in on the act.

Jack Doherty popped over the last point, with a goal for the taking but it was Derry who ran out winners.

Derry's next outing will be their Ulster SFC championship clash on Sunday, July 11 against the winners of Down and Donegal who meet in the preliminary round.