Browne feels there is more to come from Derry 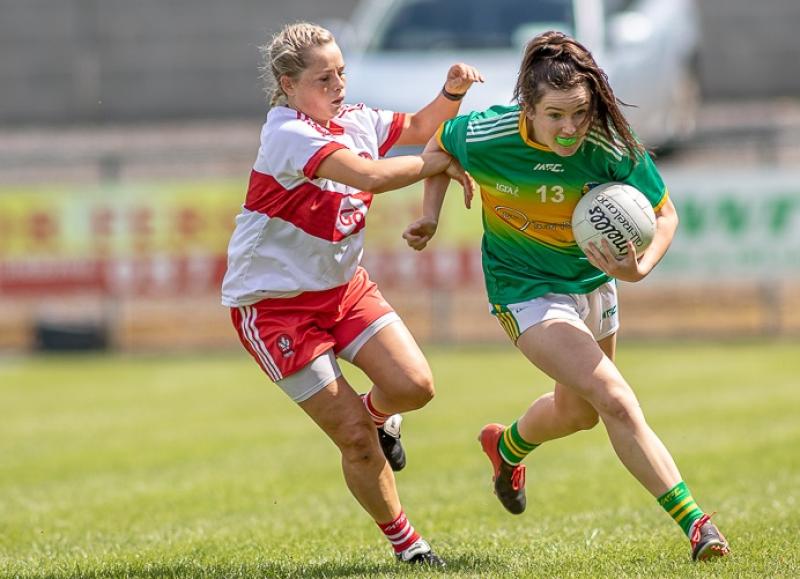 Nuala Browne in action against Leitrim during the league. (Pic: Stefan Hoare)

Derry may have lost their three league games under new manager Odhran McNeilly, but Nuala Browne says there is more to come from the new-look squad.

The Oakleafers go into Saturday's Ulster final clash with Antrim hoping to reverse their league defeat, with another clash between the neighbours coming down the tracks in July when the All-Ireland series kicks into gear.

Browne missed the 2018 Ulster Final when Derry overcame the Saffrons after sustaining a cruciate ligament injury against Carlow in the league and is currently battling with a calf injury.

“I am really pushing myself to get back....I refuse to miss another Ulster final,” Browne said.

She said that the squad missed 'a few leaders' during the league. Another was Emma Doherty, who had the cast recently removed from a broken finger and the Derry camp will be hoping Browne and Doherty are available for selection.

“We have quite a few new people on the squad this year and a lot of younger ones coming through which is good,” Browne adds.

“It is good and there is a lot of competition. We are trying a lot of new things, we have a new management so they are trying to see what works and what doesn't.”

The stance during the league was about aiming for the win, but 'building foundations' for what is to follow is the core target.

There were spells in the league games where things went well, but a slow start against Antrim had them playing catchup from square one. Against Leitrim, a host of missed chances left Derry struggling to break their way into the game and against Louth they battled all the way, despite facing an uphill battle.

Did the poor opening 10 minutes against Antrim come down to nerves?

“It probably was,” Nuala admits. “Some of the girls were new to the panel and they were in at the deep end. It is such a difference from club football to playing county football.

“It was the build up to it all and having managers from Antrim, they really wanted to win and we felt we had a lot to prove to them. Some girls are feeling the pressure of being new and some of us older ones are thinking it is getting near the end, so it is now or never.

“It is very hard, it is quite a new squad, with a lot of girls coming in and it has changed things up. Some of them play a certain way that we are not used to. It is adapting to that.

The Covid-19 outbreak had the management relying on a Strength and Conditioning programme to get the players up to a level. It was followed by a heartening run-out against Tyrone, but Browne said there have been improvements since, even if results don't suggest it.

“What we have done in the last two months has made a big difference,” she said. “It is only going to go from strength to strength if you cut out the small things.

“The basic skills are coming on really well. You can see that in training and the friendships are developing within the girls, that will bring on the team spirit.”

After Saturday's Ulster decider, Derry face into an All-Ireland group that includes Antrim, Limerick, Carlow and Wicklow, teams Browne is familiar with.

“we are getting better every year and getting closer,” she said, while casting the mind back to 2017 and losing the All-Ireland after a replay in Clones.

Derry led by nine points before surrendering their advantage in the drawn game and were hit by a sucker punch with a late Fermanagh penalty.

“It was the closest we've ever been and the girls have the fire in the belly to get there again,” Nuala said.

“Fermanagh and Antrim have both been a pain in our side. Even to get one win over them would be nearly the best achievement of the year.

“The experience of being there the last few years has really brought us together. We are getting there.”

There is a togetherness in the Derry squad, something they will need this weekend in a game Browne feels will be a battle.

“It is always a good battle any time we play and the scoreline won't reflect it sometimes,” she feels.

“It is always a very tough game and it is one people will want to watch. You are starting to feel the nerves and people are talking about it. Everybody is asking how we will do against them the next time.”

It's not the first time they've met this season and it won't be the last. But there is silverware up for grabs and they will crank up the intensity even more.

Derry will target a better start and if they can get out of the blocks, like they did in last year's meeting in the All-Ireland series, it will leave them well-placed to see how far they have developed.

Watt an Era: A look back at the Glen Ladies' story

Glen set the standard of ladies' football in Derry

Glen ladies have won 19 of the senior championships since Derry initiated the ladies' game in 1995. Mary Jo Boyle has 12 winners' medals and captained the first of three Ulster winning teams. She spoke with Michael McMullan about the club's path to the top.