Derry forced to battle their way to third successive win

The Oakleafers play Limerick in the promotion semi-final 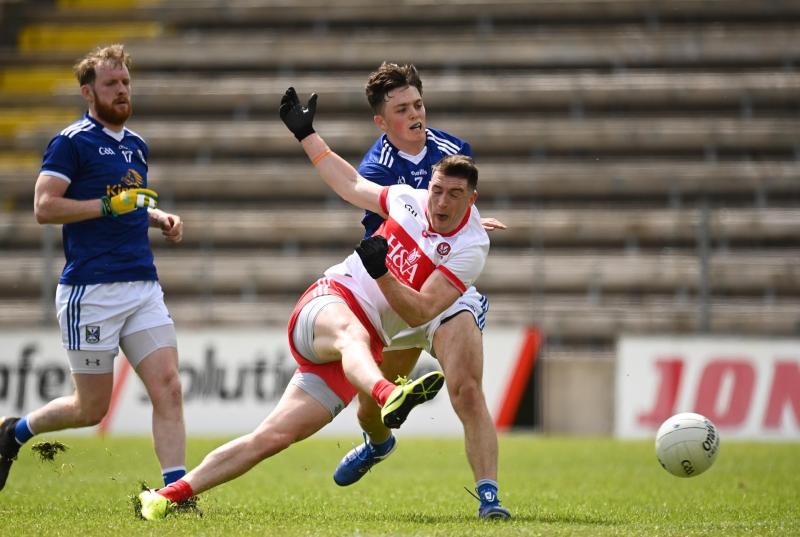 Derry finished their NFL group on a winning note with victory over Cavan on Saturday afternoon at Kingspan Breffni.

After twice being a position of control, Rory Gallagher's side were left hanging on for a victory that saw them top the group.

It took a late save from Odhran Lynch to deny Padraig Faulkner slot what would've been a third Cavan goal to see Derry on their way to victory.

The Oakleafers set off like a house on fire with a Gareth McKinless run, which resulted in a McGuigan score.

When goalkeeper Raymond Galligan saved from McGuigan Loughlin stroked over the '45 'to make it five before Cavan grabbed their first score.

Derry had a second goal chance, but McKinless was brilliantly denied by a full-stretch Galligan save.

The Breffni side, aided by their vocal sideline, turned the heat on Derry's kick-out and pegged four unanswered points, with the Luke Fortune effort the pick of the scores.

A high ball to the Derry defence was flicked to the net by Gearoid McKernan and when Cavan won the kick-out, the home side went into a 1-6 to 0-6 lead after 27 minutes.

Derry's response was instant, with Niall Loughlin showing poise to slot to the net from a tight angle.

The visitors packed their defence to keep a tight ship before the interval, before a 45-metre free from McGuigan gave Derry a 1-7 to 1-6 interval lead.

Derry started the second-half like they did the first, with McGuigan, Benny Heron, Emmett Bradley putting them four points clear

Two Ethan Doherty runs won frees for McGuigan and Loughlin to push Derry into a commanding lead 1-13 to 1-6 before Luke Fortune notched a first Cavan point in 30 minutes.

A hamstring injury to Brendan Rogers and a Chrissy McKaigue blood injury forced Derry into a reshuffle. As they lost their shape and struggled to get their hands on primary possession, Derry struggled to stem the resurgent Cavan wave.

With four minutes remaining Padraig Faulkner cut in along the end-line before squaring to Martin Reilly to palm home a second Cavan goal and it was game on, 1-14 to 2-10.

Mickey Graham's side had a chance to hit a third goal, but Gareth McKinless' pressure and Lynch's block saved the day.

As Cavan peppered high balls into the Derry defence late on, Lynch stood strong under the danger, before McGuigan capped off his man of the match display with his eighth point of the game.

Derry will play Limerick, a team they beat to clinch promotion from Division 4 in 2019, in the promotion semi-final on the weekend of June 12/13. Venues, times and dates will be confirmed later. 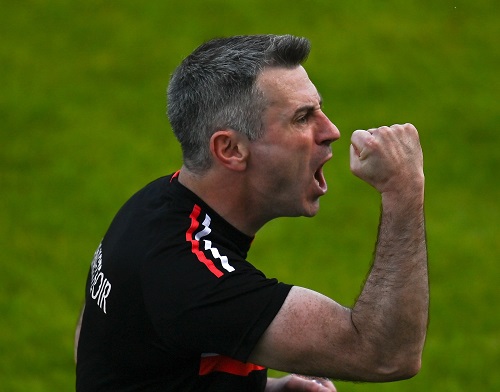