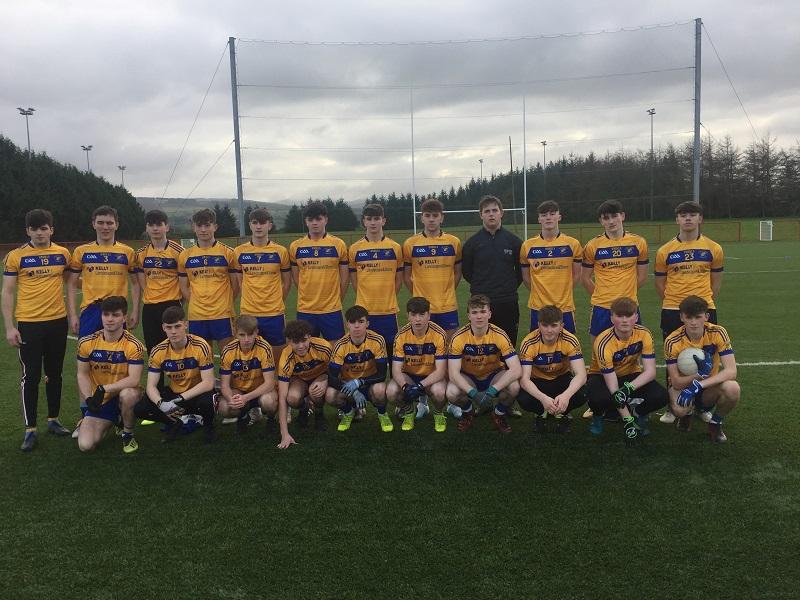 The Loreto McLarnon Cup squad pictured before their group game over St Louis.

They were made to dig themselves out of trouble, but a slicker and more disciplined Loreto side booked their place in round two of the qualifiers with victory over St Malachy's Castlewellan on Thursday afternoon.

The winners led by double scores (2-6 to 1-3) at half-time, thanks to goals from Odhran McLarnon and Lorcen McMullen.

Loreto were the dominant force and should've been further ahead, only for Ben Dillon's penalty going straight at goalkeeper McVeigh before the same player missed from the rebound.

It was all change after the break.  Majestic points for Jamie McKee and Ciaran Lundy was followed by a close-range 35th minute goal from Eoin McEvoy and it was game on.

A free from the skipper Dara Mooney and a point from Lorcan McMullen settled Loreto.

Referee Martin Conroy warned two players from either side, as tempers began to fray in the midst of a cross-field wind and driving rain.

Ciaran Lundy was sent to the sin-bin in the 48th minute for a late tackle which provided Mooney the chance to open a three point gap.

Lorcan McMullen finished the game as a contest with a 54th minute goal, which began with a strong run through the middle from Michael Óg McKeown.

To cap it off, substitute Conn Kilmartin tagged on a point to secure Sean Murtagh's side's passage to a meeting with Aquinas in round two.