More Derry families than ever turning to food banks 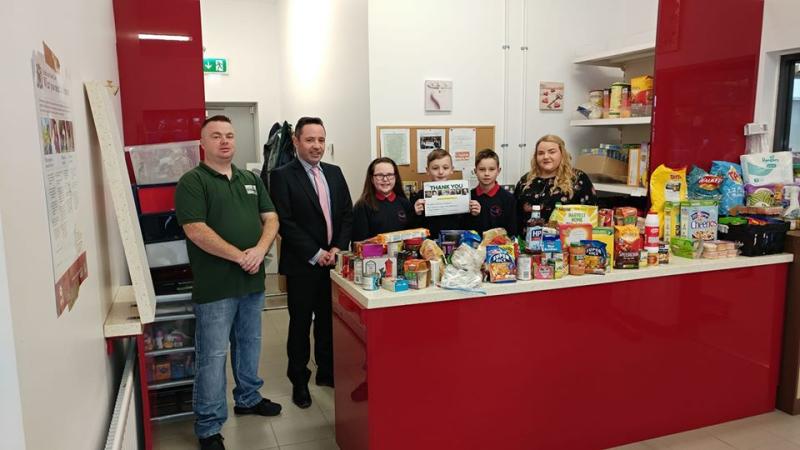 James McMenamin pictured with primary 7 pupils from St. Oliver Plunkett's P.S. who made a kind donation

Hundreds of Derry families are in need of emergency food parcels this Christmas as a consequence of low-income jobs and benefit delays, it has emerged.
Compared to this time last year there is an additional 215 families who have been referred to Foyle Foodbank.
From the 1st January 2018 to the 11th December last year there were 925 families, 1632 adults and 1,170 children – 2,802 in total.
The top three reasons cited for those referrals are benefit delays (204), benefit changes (115) and low income (415).
Over the same period this year there have been 1,070 families, 1,781 adults and 1,256 children – a total of 3,037.
Numbers affected by benefit delays (276) and changes (140) have been pronounced, while the number of low-income referrals (435) has also incrementally increased.
James McMenamin, Foyle Foodbank Manager, said there are another 70 vouchers to add to the system which will take the total to 1,140.
In the next two weeks he anticipates 30-40 people visiting the food bank each day which will amount to hundreds more by Christmas.
“People have a choice at Christmas between food, heating, electricity and toys for their kids. There are also a lot of people who have moved to universal credit and are still waiting for money and low-income families.
“They have that choice of between having food or toys for their kids and nobody wants to see their kids go without.”
There is a misconception that it is only the unemployed who visit food banks but Mr McMenamin said that zero hour contracts, minimum wage jobs and even a sudden change in circumstances means that nobody is insusceptible.
“If you look at a family who are working, paying full rent or mortgage, plus childcare and they have an unexpected bill such as the car breaking down, that can take away any surplus money they may have had because they need that car for work.
“Therefore, they’re left with a very difficult choice.”
Vouchers are handed out on a daily basis by referral agencies across the town, such as Dove House, Hillcrest Hub, Caw and Nelson Drive and others throughout the city.
Food Bank workers will sit down with people to find out if there are any underlying issues for which they need support.
“It’s no good us just handing out food,” he explained. “We need to find out what the issue is so we can refer them on to a debt adviser, a benefit adviser, or it could be counselling or a GP they need an appointment with.”
Mr McMenamin started out with Foyle Foodbank as a delivery driver and there are thirty volunteers based at its Apex owned premises in Springtown Industrial Estate. “We rely on them, we couldn’t operate without our volunteers.”
“We’d be lost without the support of the public, our all stock comes from the public and local businesses, the food bank gets no funding whatsoever.
“Christmas is an amazing time for us, we get so many donations which help to set us up for the rest of the year. The people in this town are just amazing.” 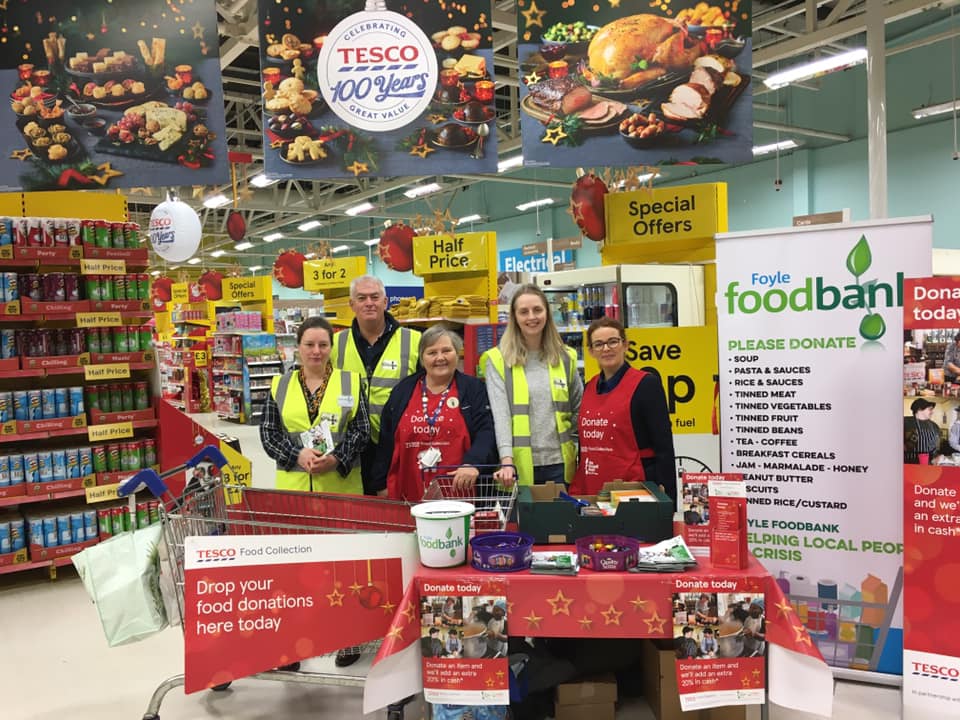 Collection points are at Tescos and Sainsbury's on the Strand Road, businesses also collect, there are appeals on Facebook and food can also be donated directly to the Food Bank.
The links between welfare changes, food bank use and destitution are contested by different political parties.
Trussell Trust. which runs two-thirds of the UK’s food banks include Foyle Foodbank, said it distributed a record number of food parcels between April and September this year, including 301,653 that went to children.
It was a 23% increase on the same period last year, representing the steepest rise the charity has witnessed since its network of food banks was fully established.
The Trust has called on politicians of all parties to pledge to protect people from hunger. It is demanding an end to the five-week wait for universal credit payments, a commitment to ensure benefit payments cover the basic costs of living, and investment in emergency support for people in crisis.
Reflecting that view, Foyle Foodbank believes that local politicians need to return to Stormont so that local issues can be addressed.