St Patrick's claw their way back from 10 points down 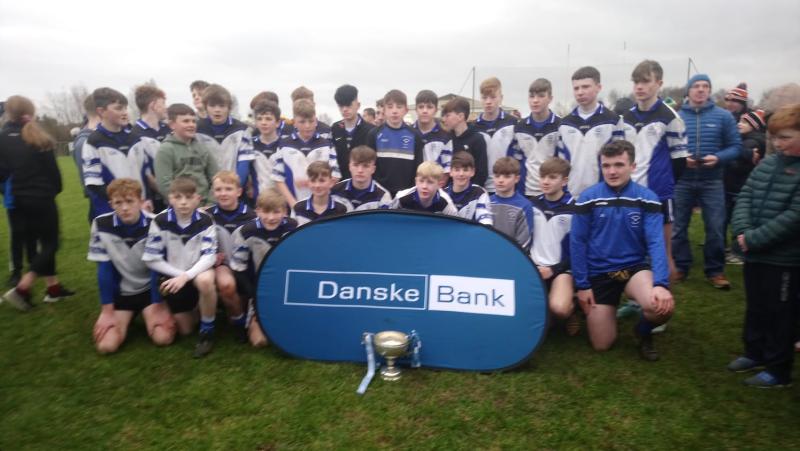 Maghera came from 10 points down to win the Corn na nÓg following an enthralling encounter on Saturday afternoon in Derrytresk that needed extra time to find a winner.

It is the fourth title won by this group of players following their D'Alton Cup success on top of the Martin O'Farrell Cup and Oisin McGrath titles in Year 8.

On each ocassion Omagh were their nemesis and again both poured every ounce of energy they had. It was underage football at it very best.

For most of the game both defences were on top but the difference was the presence of Omagh's key player Charlie Donnelly. He alternated between full-forward and midfield. His three goals had the Tyrone side 3-4 to 0-6 ahead before a fourth goal, from Dillon Chism, put ten points between the sides.

Omagh were in control, were a bigger side and were finding their scorers easier to come by. In contrast, Maghera continued to turnover the ball and for all their efforts, it looked like the game was going away from them.

Man of the match Tiernan McCormack typified their spirits and they simply never gave in. After being encamped in the Omagh half, the tide began to turn.

WATCH - Managers Neil O'Kane and Colm Lavery give their reaction...

Ciaran Chambers (2) and Conor Downey chipped in with points before Conor Coyle's 50th minute goal, after a terrific team move, cut the gap to four points with 10 minutes to play.

Donnelly broke Maghera's momentum but still it was the Derry team who grew into the game. They were simply not going down without a fight.

Danny McDermott, Tom Quinn and inspirational captain Dara McPeake all kicked points, with McCormack fittingly reducing the margin to a single point. Maghera had a goal chance cleared off the line by Dillon Chism but Conor Downey's late equaliser forced extra-time, 1-14 to 4-5.

Early in extra-time, Omagh's Charlie McCrory fired to the top corner of the Maghera net but they were not to be denied. With a pep in their step that was absent for the opening 40 minutes of this epic encounter, they grew in confidence.

It was Maghera's use of the bench that offered them a fresh impetus. Super sub Lee O'Neill goaled for Maghera as the tide began to turn again. A second O'Neill goal, a thunderbolt to the top corner, in the second-half of extra-time put Maghera 3-16 to 5-6 to the good.

Omagh got a another spark and with Charlie Donnelly beginning to have an impact in the game again, Maghera were left hanging on and had to survive a late scare when a powerful low Dillon Chism shot flashed on the wrong side of the post.

It was cruel on Omagh but a let-off for Maghera who, with 3-13 from play in total, went on celebrate a famous win.

A cracking encounter. Honesty. Bravery. Free-flowing. An absence of sweepers.

For full coverage and photos, as well as a full round-up of this week's school action, grab a copy of Tuesday's County Derry Post.