The Slaughtneil man was named man of the match. 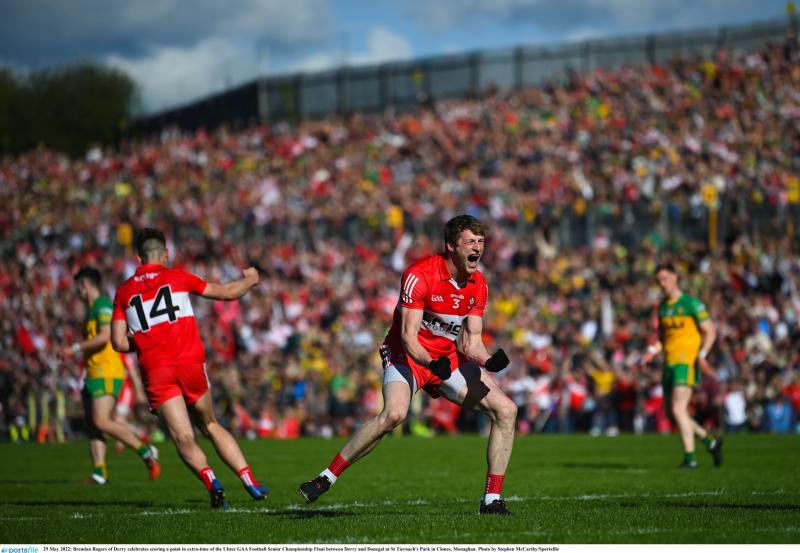 It’s not too often down the years that the man that’s marking Michael Murphy in a championship game ends up coming away with a greater scoring tally than him.

That was the case in Clones on Sunday as man-of-the-match Brendan Rogers tallied three points and held the legendary Murphy to two.

And that was only a snippet of the story. Rogers was up and down the field like a Duracell bunny. He epitomised everything that the Oakleaf did well.

The final whistle in Clones signalled the closing of a chapter of this season that has been almost too remarkable for words. First it was Ulster and All-Ireland champions Tyrone that were slain, then Monaghan, and, finally, Donegal.

A harder route couldn’t be found. This one was earned.

“It doesn’t get much better than that and it’s very difficult to put into words,” admitted Rogers.

“There will be a lot of happy people around the county over the next while because we haven’t had much to shout about and finally we do. It’s a relief really.

“It’s special times. If you said we’d be Ulster champions at the start of the year then obviously you’d take in it a heartbeat. It was a very tough game and there was a lot of work that went into it. I suppose we did it the hard way in playing all the top teams and we came out of a titanic battle at the end,” Rogers told the County Derry Post. 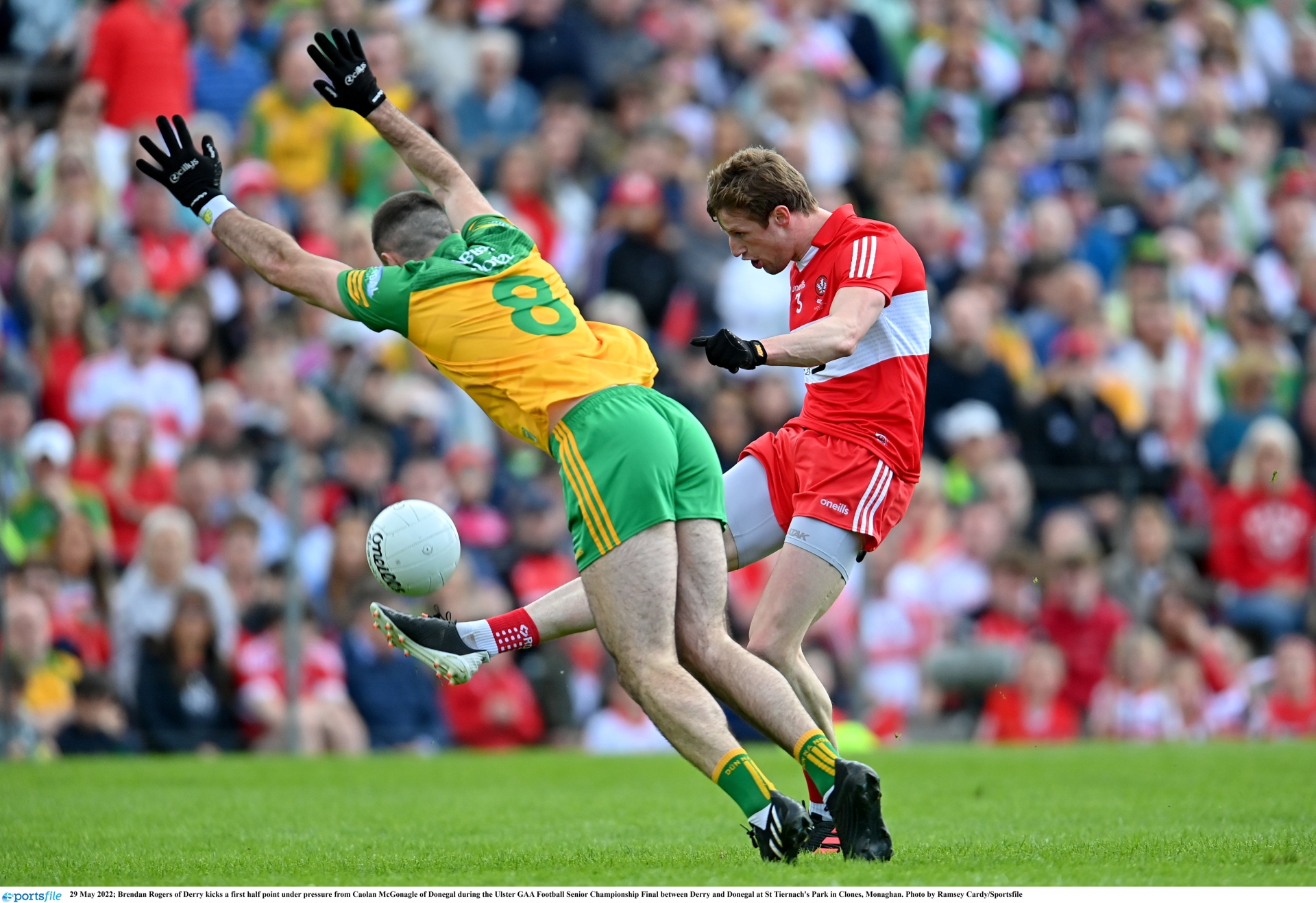 “It’s great looking at the supporters and the wains and everything you see out here – hopefully this will do Derry the world of good for a long time to come.

"We still have to put in the work ourselves for the next couple of weeks and we will have to move on from this. We’ll celebrate it and enjoy today and tomorrow but then it’s back to the grindstone again.”

Rogers’ performance was one that also drew praise from his manager, Rory Gallagher.

“Unbelievable. He’s going toe to toe with Michael Murphy, the best player in Ulster by a mile, the best leader in Ulster and he is still able to play brilliantly,” insisted the manager.

“But Brendan eventually was able to get the better of it all and we knew Michael was going to play out the field and Brendan was going to have to punish it.

"Brendan carried a massive threat, but he is a very talented player and he gives the opposition plenty to do.” 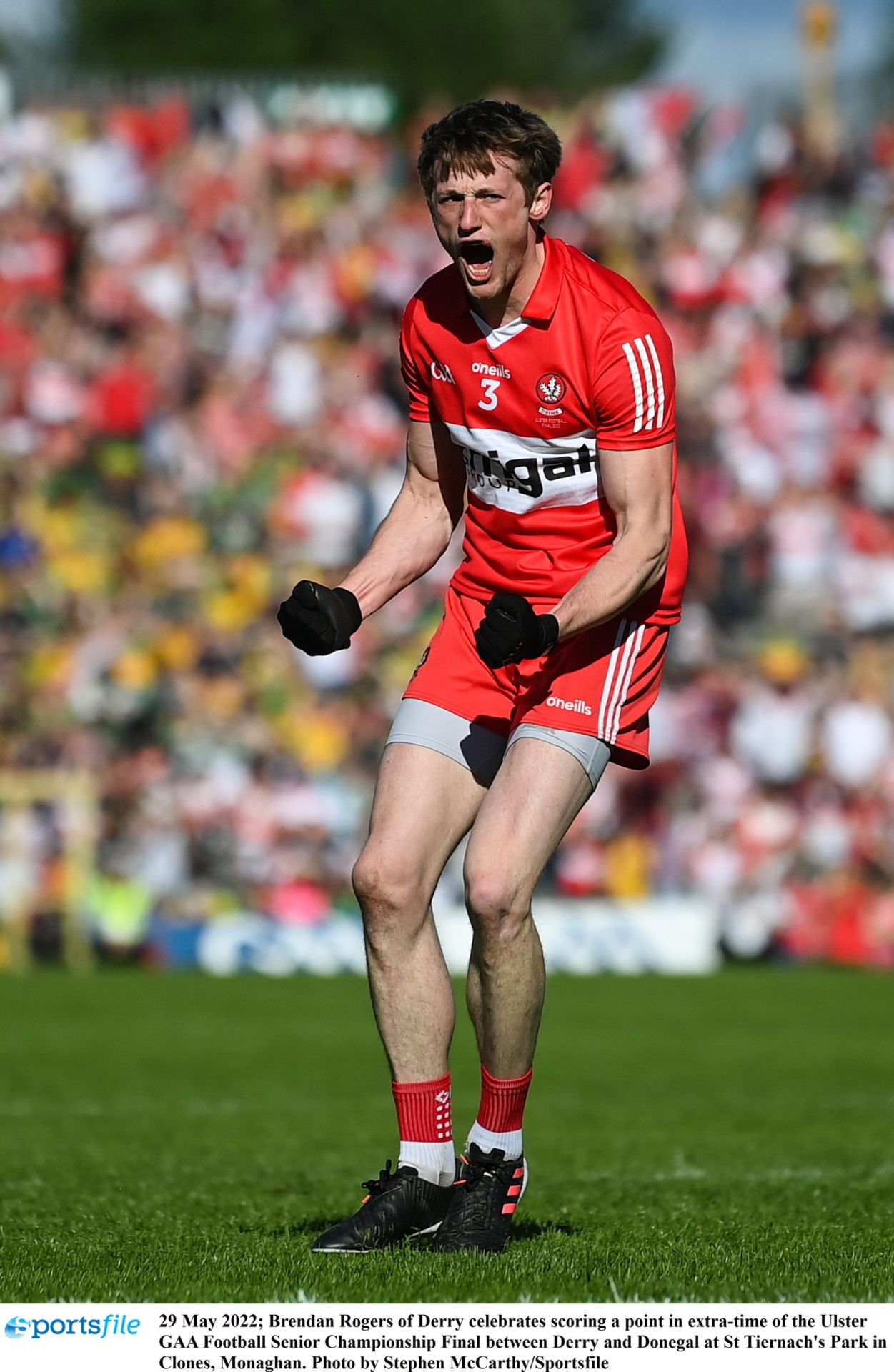 Just as he had been in Healy Park and in the Athletics Ground, Rogers was still on the playing field well over an hour after the final whistle, taking photographs, signing autographs, and chatting with supporters.

To the youngsters staring in awe, he was a real life superhero in the flesh. The most special moments come with the family and loved ones, though.

When it comes down to it, only the Derry squad and their nearest and dearest know exactly what commitment it takes to compete at the elite level.

“The family do see the good and the bad of it and it’s not all good. There’s a lot of hard days and you be crabbit in the house because you’re tired and sore from training but you just get on with it, and they try to do the best things for you,” he explained.

“They help with the clothes, preparing food and all them things behind the scenes. It’s brilliant to have them here today and I’m delighted for them and for all the families as much as anybody.

"From chatting to the players, you know the work that goes in and it’s good for everybody.”

Rogers’ talent in defence has been complemented by his threat in attack. He has grown into an all-rounder and a strong Oakleaf leader.

Those characteristics were on display in second half extra-time when he popped up to fire over this third point and give an impassioned roar to the crowd behind the net.

“We’ll not get too far ahead of ourselves in getting me out the pitch! I think I scored the last one from maybe the 13 metre line so it was hard to miss,” he joked.

“Awk look, you knew that it put us in a good place going forward and every point at the stage of the game was very precious. There was only four or five scored in extra-time in total so I knew the value of it.

"But, look, I had to get back down the pitch and defend immediately again and we had a couple of goal line saves from the other guys. It was difficult, but such a relief at the end, it’s just brilliant.”