Eoin McCloskey recalls his recovery from a serious injury during his early career. 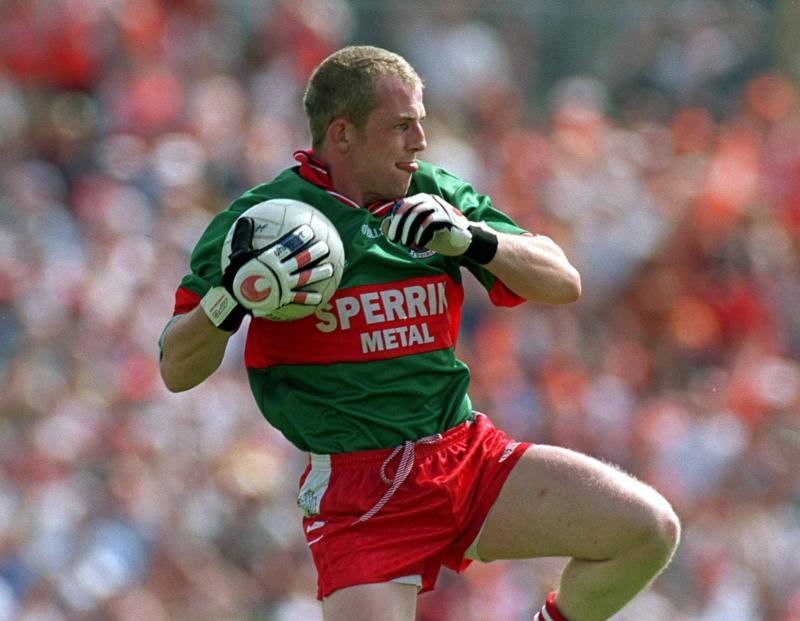 For any young footballer, shattering both wrists simultaneously and being in plaster for six months could be a career ending injury, but Eoin McCloskey returned not only to play, but to become Derry's first choice goal keeper in the historic 1998 Ulster championship winning side.

“I grew up at under fourteen, sixteen and minor playing outfield. I had three years at minor with the club, I was playing at wing forward and then Andy (Murphy) decided to put me in goals because I had a good catch and could kick well. We actually won the Ulster minor that year with Dungiven.”

But it didn't follow that Eoin's fate was sealed as a goalie, he still went on to enjoy another forray out field.

“I played outfield for Derry U21s and I hit the frees off the ground at that time. I played at centre half forward under John Joe Kearney and we got to the Ulster final that year.

“We conceded two early goals in the Ulster final and just never recovered from that. Oddly enough we had beat the favourites Armagh in the semi final, a good Armagh side with boys like Oisin McConville, Paul McGrane, Diarmuid Marsden.”

Then came the freak injury that would see McCloskey sitting out of the game for a year at just 22 years of age.

“In 1996 I was playing in a club league game for our seniors. Me and big Brian McGilligan were in the middle and I just went up to catch the ball when a player came in underneath me and I landed head downward. I put out the two hands and landed on my wrists.

“It was bad. I had to go to theatre and get pieces of my hip taken out, and pins put into my wrists along with bone grafts, it was a real mess. 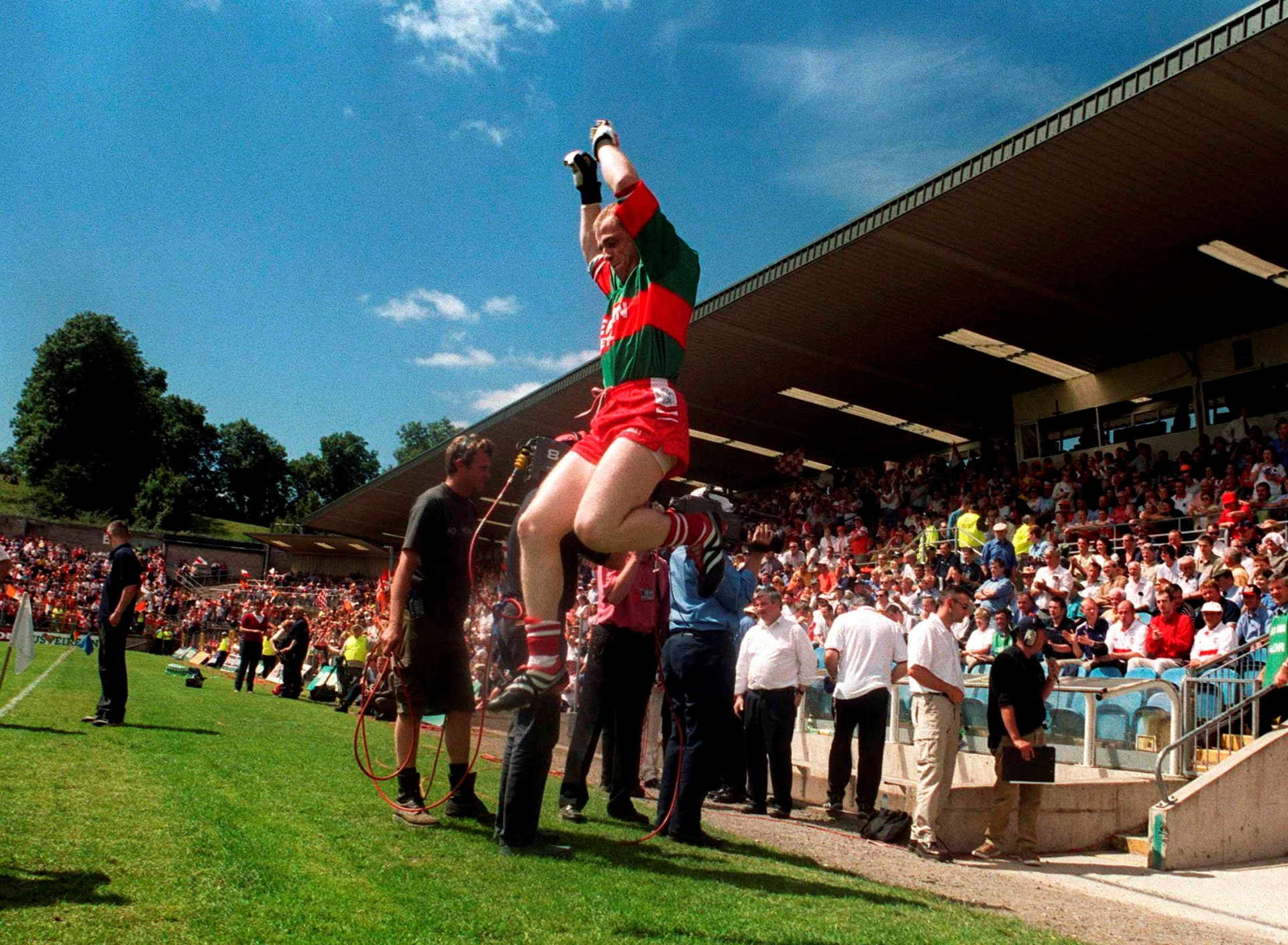 “I was in plaster for six months, both hands at the same time. I missed the entire 1996 season.”

Returning to play would take strength of character as well as physical rehabilitation, but to return as a goalie would be the ultimate test.

“At the start of 1997 Eugene Kelly came in as our senior team manager and he asked me would I do goals. I didn't really want to initially, but I went in anyway.

“I suppose I looked after the wrists, I had them well strapped and protected, but I did weights specifically to help build the forearm strength and that.”

Dungiven's run in Derry concluded with a win over Castledawson. They went on to lift the Séamus McFerran Cup with a victory over Tyrone's Errigal Ciaran at the end of 1997 in Clones, only to fall to eventual All Ireland champions Corofin in the semi final in 1998.

“Derry all happened very fast, after Dungiven won Ulster and I played couple of National League games, and then after Dungiven were put out of the All Ireland club I was picked to start in the closing stages of the league.

“I played in a national league quarter final, semi final and then final and I kept a clean sheet all year. We never conceded a goal through the league or championship that year, which was impressive enough,” said McCloskey.

Described as a 'dour Ulster affair' by the media of the day, the 1998 Ulster final wasn't a classic.

“I remember getting the bus in Dungiven and it had rained all morning. The ground was really wet, I remember needing a towel in the goal to squeeze out my gloves so it was never going to be a day for a classic game in those conditions. 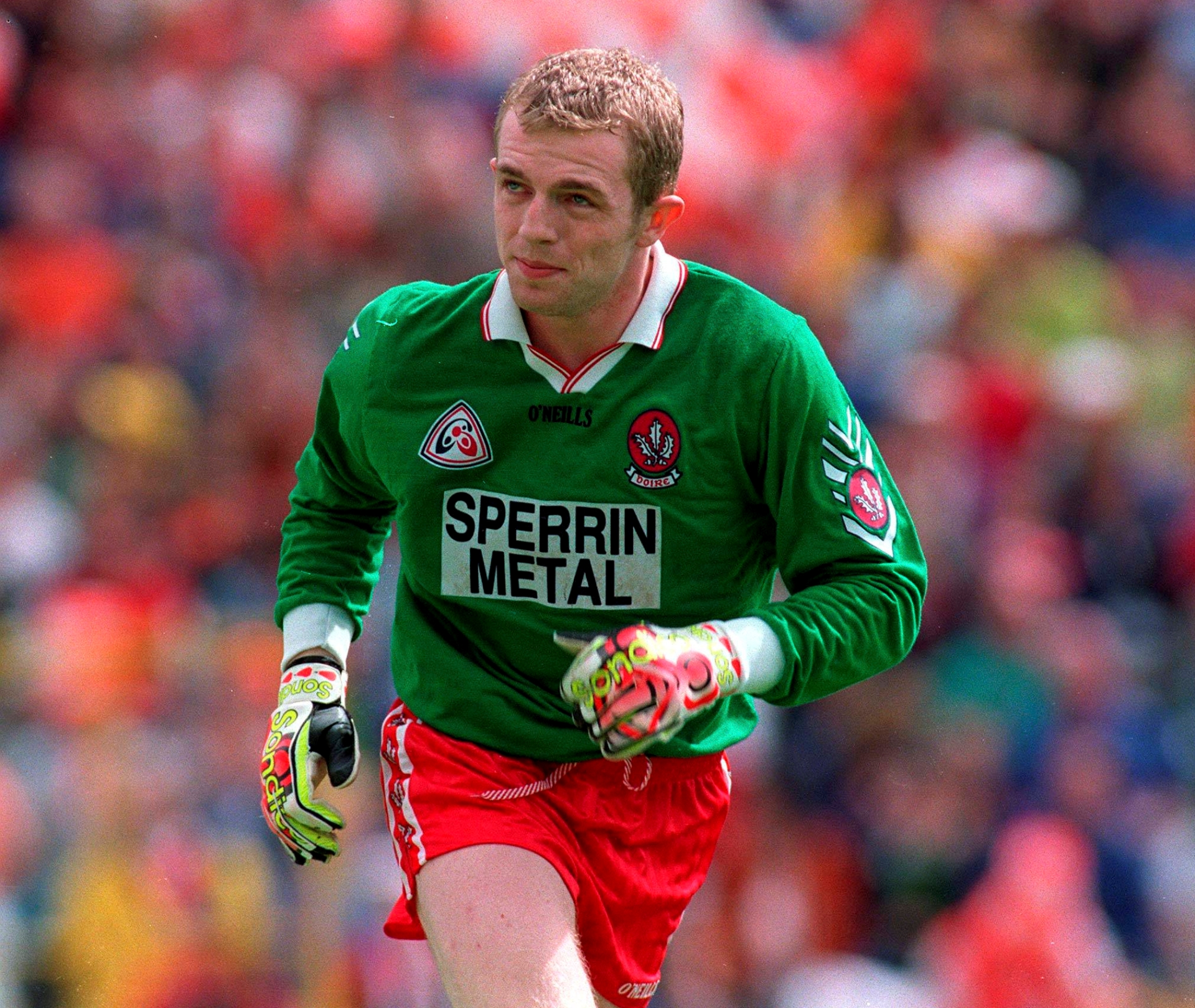 “Donegal were playing a short hand-passing game at that time, and Derry had a really tight defence in those days, so Donegal were never going to put a big score up on us.”

Tied at seven points each, Geoffrey McGonagle famously put Brolly in for the goal that eventually guaranteed Derry's victory.

“That goal, like Donegal had hit a wide, and the game was a draw at seven each. I just kicked it out as far as I could, but the ground was wet.

“I didn't even catch it right because I slipped as I kicked it, and it only went to the '45 where Paul McFlynn caught it and got it to Tohill who launched it into Geoffrey.

“You know Geoffrey just gave his man the wee nudge and flicked it into Joe's path, it was just a flick, it was just that natural to him.

“Joe had to then steady down and get around his man and not panic and that took an amazing amount of calmness and coolness not to panic. Joe was brilliant at that like.”

Euphoria ensued, Derry fans streaming onto the pitch from all sides in the rain and McCloskey remembers the emotion of the day.

“Looking back I remember looking up into the eastern stand when it was over and people pouring onto the pitch and you trying to see your team mates for a hug and it was just mad. 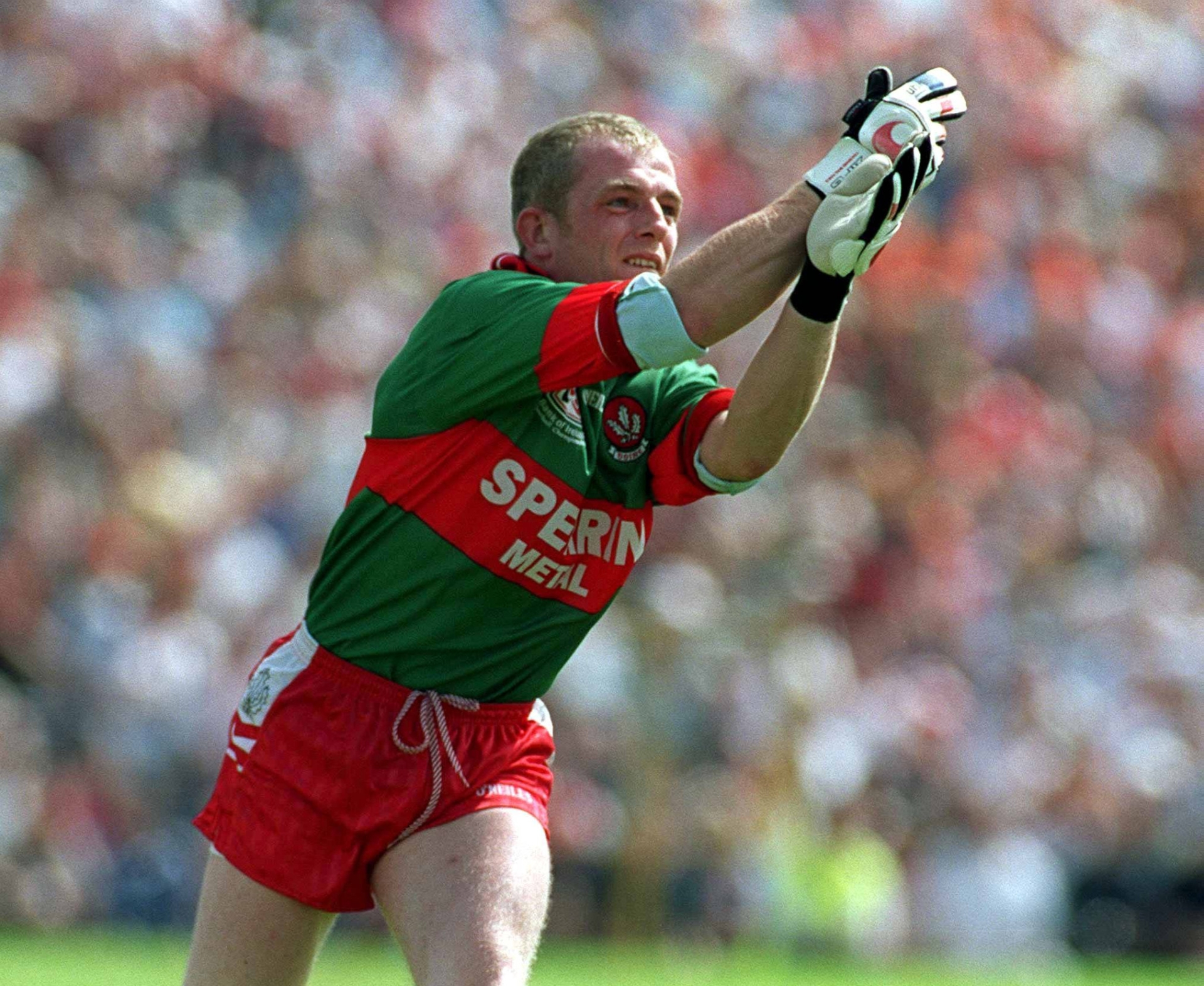 “I did an interview for the BBC and I remember reflecting on my uncle Liam Murphy who had won two Ulster medals with Derry in the 70's, and his brother Plunkett had captained Derry in '87 and so it was just nice for the family. It was special to have had them go ahead of me, and for me to be able to carry that on for the family you know.”

McCloskey who now lives in Newry with his wife and four daughters was always unconventional, and enjoyed the craic with the squad.

“I used to kick '45s over the bar in my sock soles and them boys were flabbergasted.”

The modern goalie thrives on being unconventional and seeing Derry's Odhran Lynch bomb up the field to set up Derry's goal against Monaghan impressed McCloskey.

“I was behind Odhran Lynch when he put the ball into Toner for the goal. I just was thinking how if I'd went that far out of goal in our day I'd have been told in no uncertain terms to get back into the goals.” laughed Eoin.

“Everything that Odhran did, his composure on the ball, every ball kicked was beautifully weighted. He doesn't panic, he saw the gap at the back and just launched the ball into the basket. A great piece of skill. 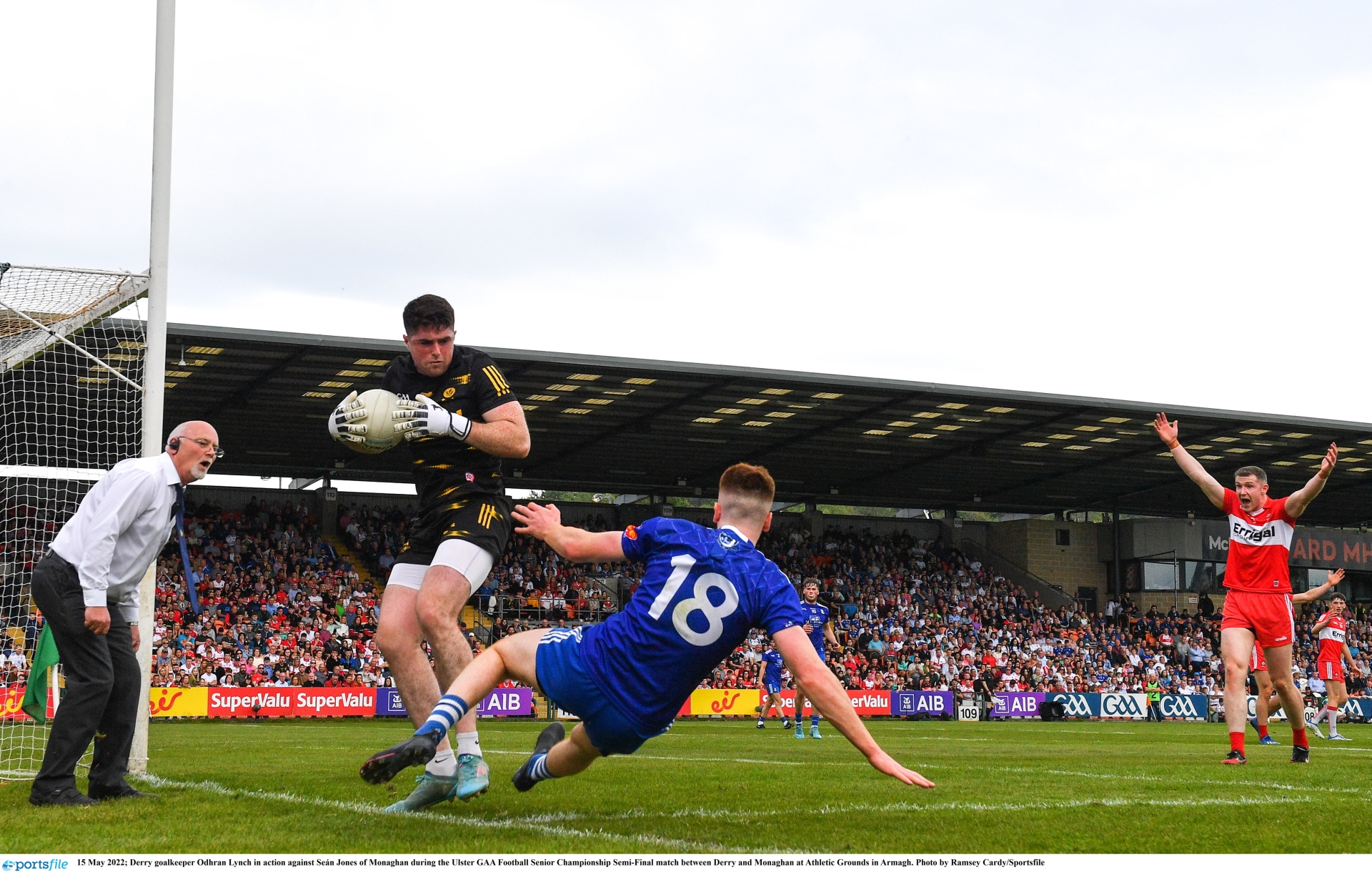 “He has absolutely great composure. His temperament is excellent, he doesn't get flustered.

“The game has changed so much now. It is much more choreographed and rehearsed now at training and he is so composed in what he does.”

“He is a big unit too in there. Some big men like Murphy and that would like to impose themselves in a game on the edge of the box, and Odhran is big and strong in there and that will give his full back line confidence to know that he is as physically present as anyone could be in there.

“It allows Rogers and McKaigue and the lads to go at their own game knowing that he can hold his own in there.

“I'm nearly afraid to even talk about this final. I was more nervous watching Derry play Monaghan than when I ever was when I was playing. Maybe as you get older that just happens.

“I just want them to win. It is so difficult to replicate the levels of intensity and commitment that they showed against Tyrone and Monaghan. 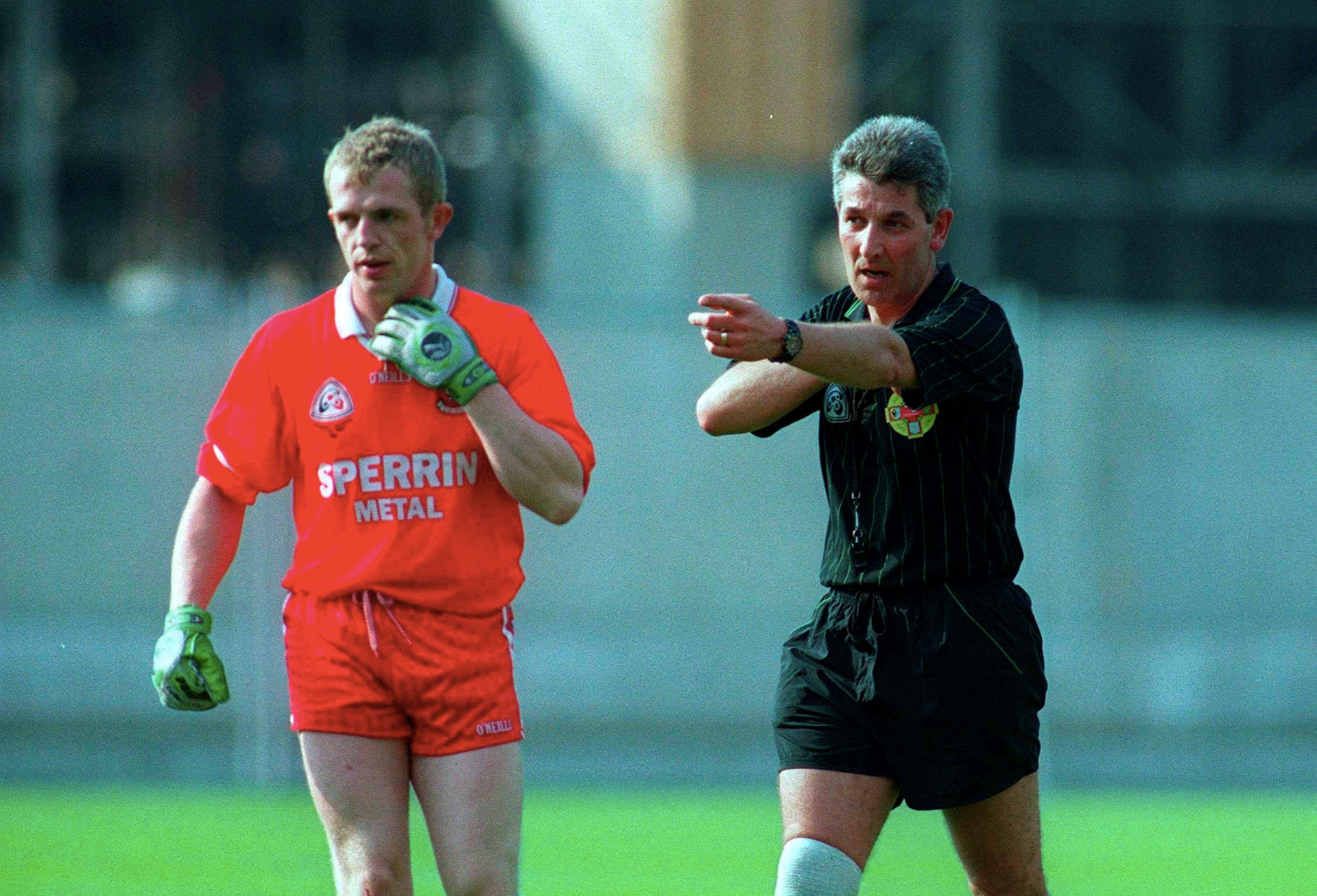 “I think if Derry match those levels, and maybe cut out a few mistakes and get their match ups right, I think they can take Donegal. They should have beat them last year, and I think Derry have moved on since then.

“Donegal were impressive too against Cavan, it's a really hard one to call, but I know that I'd give up my Ulster medal right now for any of those young lads to have it.

I never thought that it would be 24 years and we would be sitting here talking about the last day Derry won Ulster.

“I'm sure any one of us 1998 players would give up their medals now to see this squad of young lads win it.”