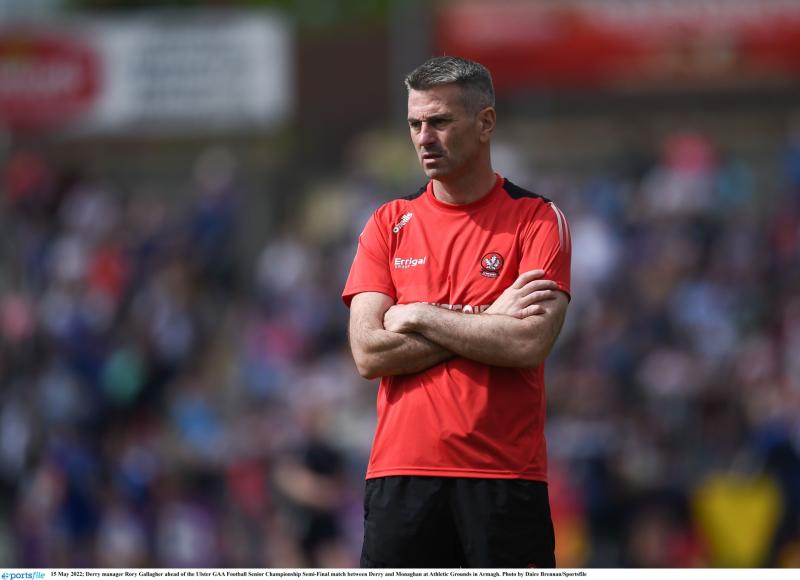 When you sit down to sift through Derry’s journey under Rory Gallagher’s stewardship, Monaghan is a decent barometer.

In his first game in charge, in December 2019, Derry lost to the Farney County in a McKenna Cup game they never looked like winning.

The Oakleafers’ first game of this season was a 0-12 all draw with Seamus McEnaney’s side in a McKenna Cup tie Derry should have won, with Ethan Doherty taking a point with a goal at his mercy.

Then you have the recent Championship battle in which Derry held all the cards once they got their noses in front.

Gallagher also uses the example of Eoghan Bán Gallagher taking time to get to the level as an inter-county level, with a cocktail of persistence and patience helping become the nailed on starter he is now.

As the 2020 season ticked along with promotion from Division Three becoming a facing light, the realisation came of where exactly Derry need to go and how far they needed to roll up their sleeves to get there. 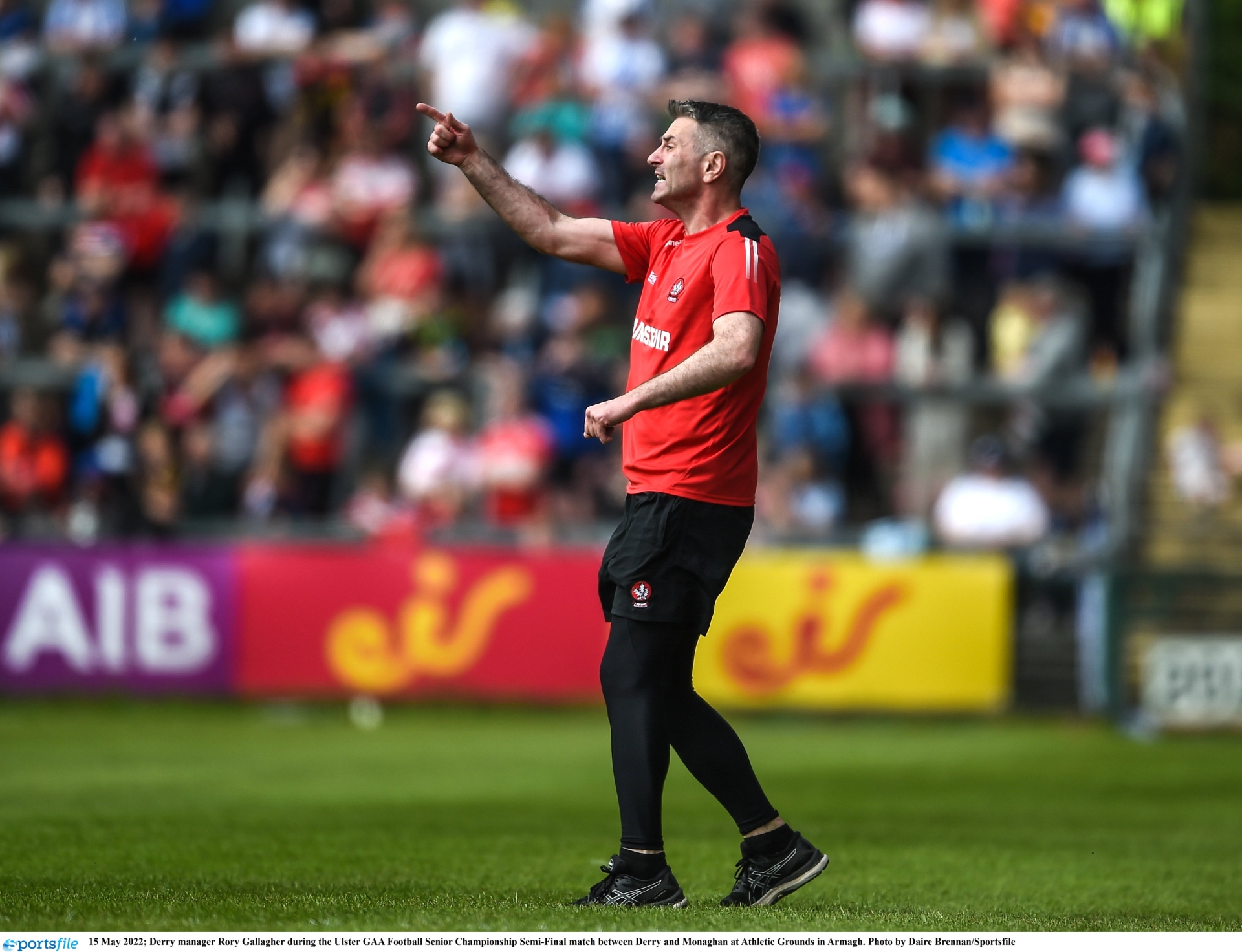 “Standards are just words,” he said.  “You have got to keep your head down and stay focused on the present. Players have got to be very ambitious to meet those standards,” said Gallagher, explaining how it became the bedrock of Tyrone, Donegal and Monaghan’s elevation to the top.

“If you combine that as a collective, it’s a very powerful group and team.”

From Gallagher’s view “from the outside” before being appointed as Derry boss, the desire was to get on the same page as Ulster’s top teams.

“The only way to get to becoming on a par is to be in an arena like championship football and going down the stretch with them.

“I am pleased that we have got ourselves to that level now. What we have got to be now is to be very consistently at that level and learn how to come out on the right side on a very regular basis in all these games.” 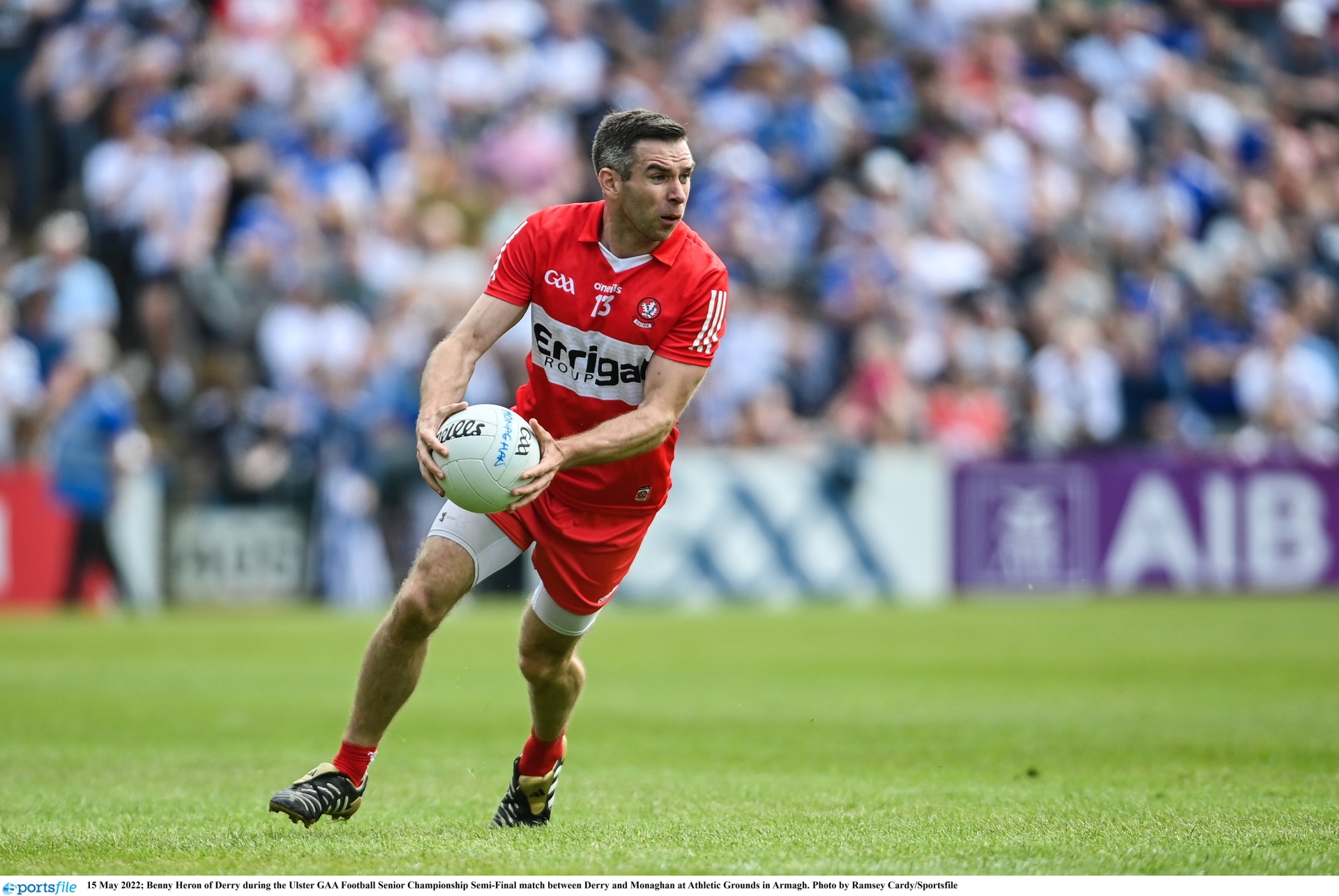 While Sunday’s Ulster final and challenging for the Anglo Celt Cup is the prize on offer, Gallagher is happy to see the players being in the competitive place “they’d like to be” as they head into the county’s first final since 2011.

The outlook wasn’t as rosy some 10 weeks ago when shipping three first half goals was the root of a heavy defeat at home to Galway to all but end any hopes of climbing to Division One.

“There is no doubt it was a setback in that it was the biggest crowd in Owenbeg in a considerable period of time and (for us) to not perform,” Gallagher said, admitting the group were “very clear” on the reasons why.

“We responded a week later (against Meath) and while were a bit unsettled, we came out on the right side of it and we were moving on after that.” 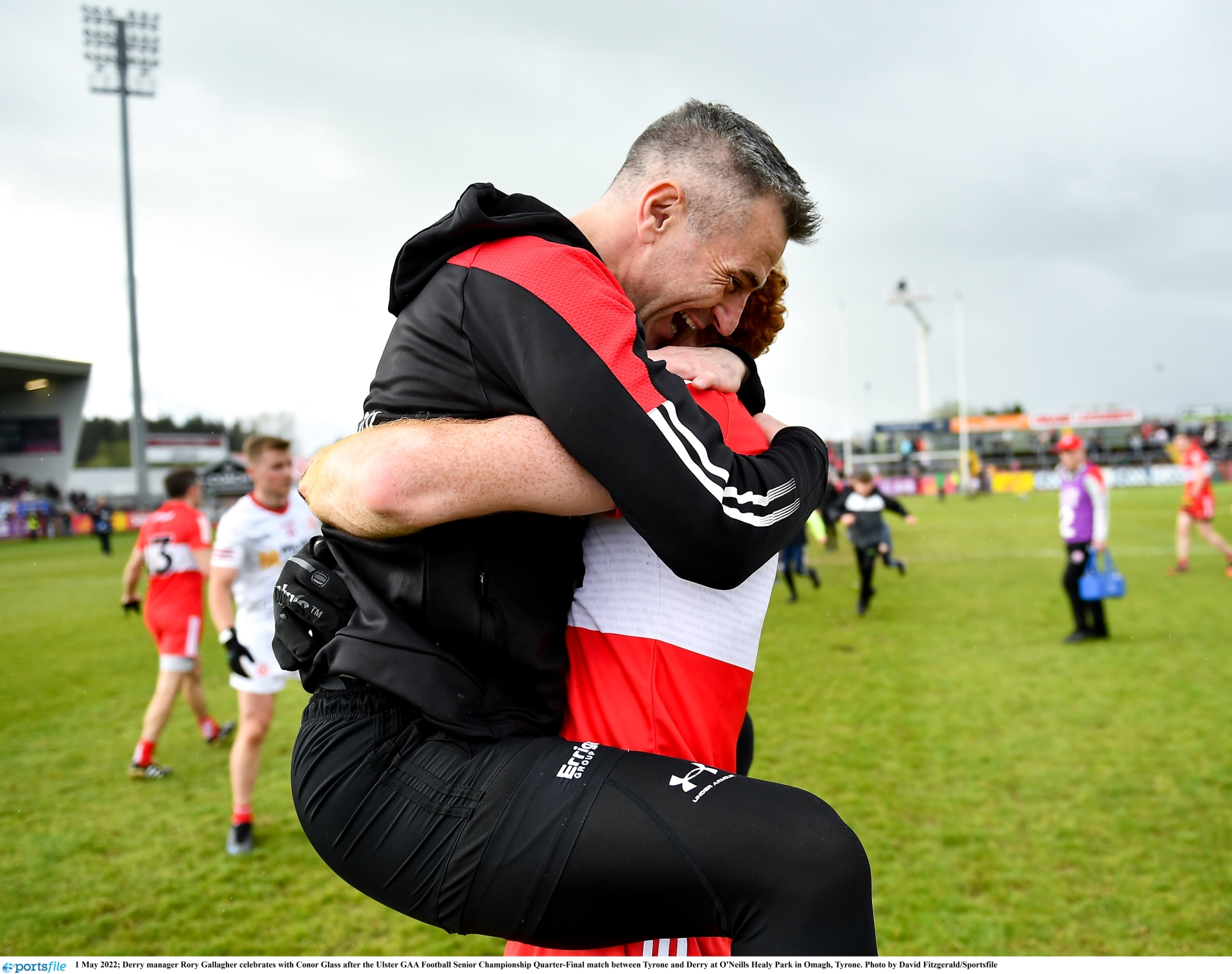 The Derry boss used the example of professional sports such as soccer, basketball and American football – with their longer seasons – to highlight how one defeat doesn’t define them.

“Very few teams go on an a winning run of five, six, seven eight games in a row,” he said.

“In our sport, a victory or a defeat can be greatly exaggerated and equally so.“Then you have someone like Man City…if they get beat, they have to go out and play three days later…we just had to get ready seven days later.”

Wins over Tyrone and Monaghan has created a buzz in the county again. Social media has been awash with clubs urging members to get their names down for tickets. There have been reports from 40 tickets being requested for the Tyrone game exploding into 10 times that number for Sunday’s showdown.

“You hear so much about Derry not having great support (in the past), but I very much see the reasons for that,” stated Gallagher, who has been enthused by the swelling of the teams following.

Without performances and commitment, he can understand why fans don’t full back a county team.

“There is a huge GAA following in Derry, particularly for club football,” he points out, referring to attending “three or four” games in the height of Championship season and seeing many of the same faces.

“Once they hear of a group of players that are committed and training hard, they are going to want to see what it is all about…that’s a big part of it.” 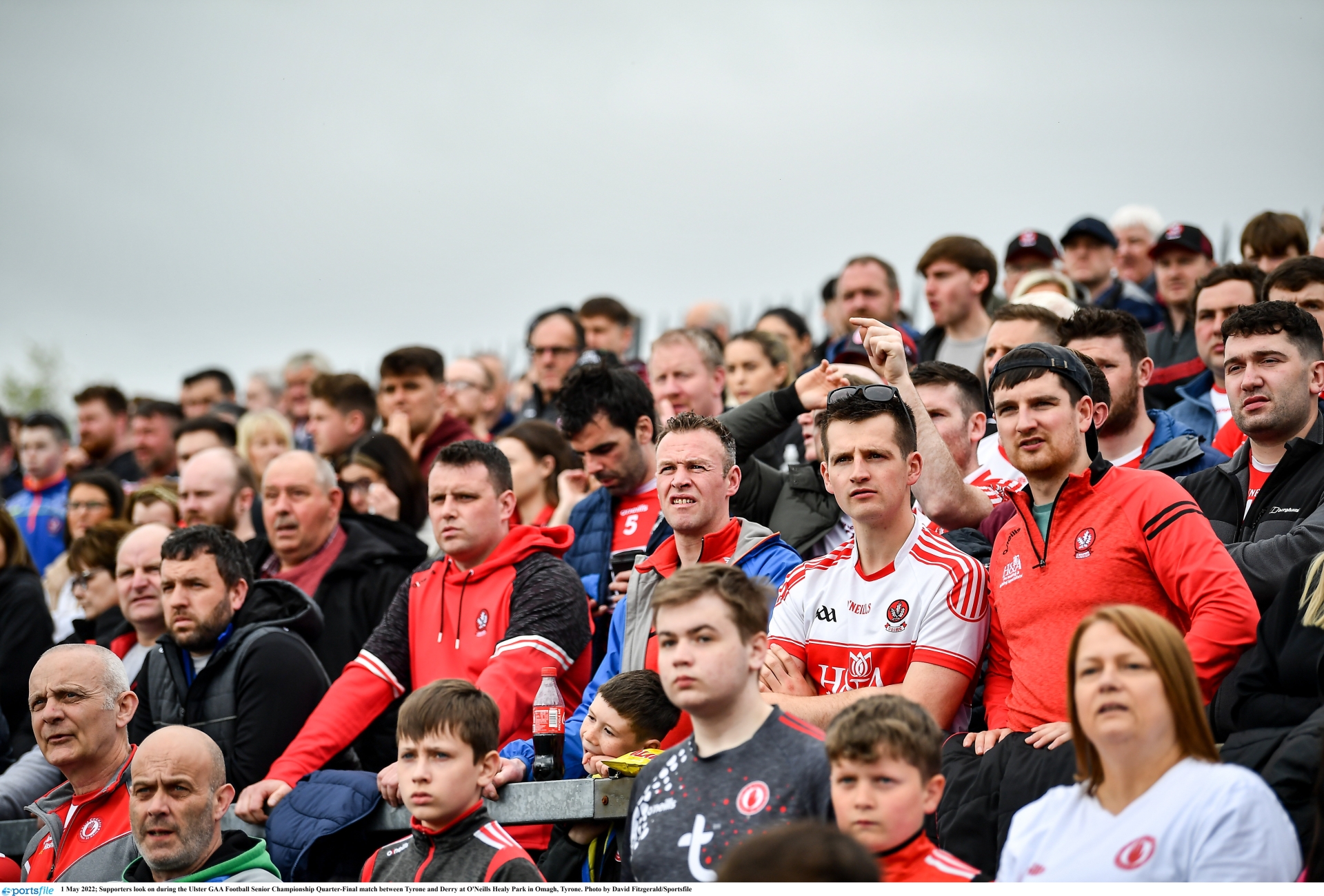 “I certainly don’t take any belief from anything in the past,” Gallagher relies when it holds any value in Derry’s mental preparation

“We take our belief from how we train and how we prepare and how we play in the games leading up to it.

They’ve came a long way from a December McKenna Cup afternoon in Inniskeen. Sunday is the next chapter for this Oakleaf set up.