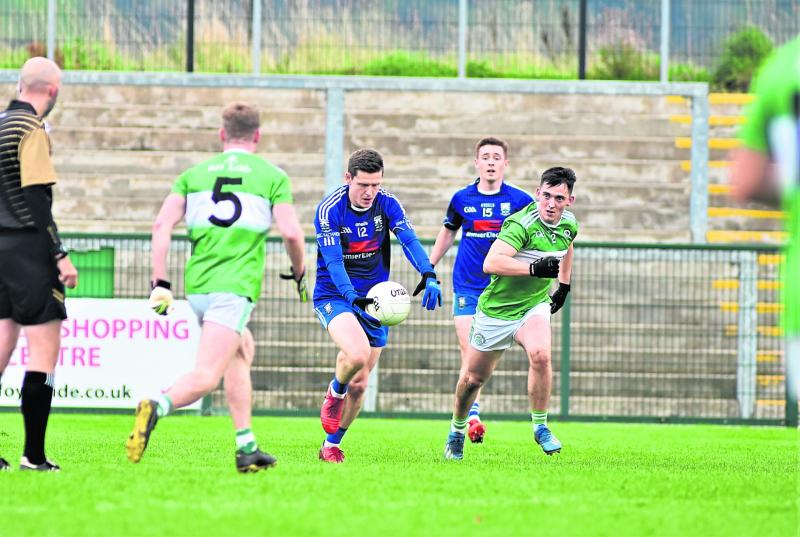 Eoghan Brown turned in a man of the match performance against Loup this week. Pic by Mary K Burke.

A 50th minute free from Charlie Diamond was enough to give Bellaghy a deserved win at Loup in a game of chess on Thursday night.

The Tones were three points ahead after 35 minutes, but Caolan Devlin’s fifth point of the game levelled matters before Bellaghy’s winner.

Damian Cassidy’s side played with an organised brand of football, with Loup’s coughing up of possession playing right into their hands.

It was apparent in the closing stages. Bellaghy kept the ball for a full two minutes before Lee Brady was blown up for taking too much out of the ball, but Loup turned over the ball again with the Blues keeping possession for over three and a half minutes this time.

With Terence O’Brien playing as a sweeper for much of the game, they sat back and Bellaghy kept the ball for over three a half minutes, with the ball even played all the way back to sweeper/keeper Peter Stuart until time ran out.

Loup had the only real chance for a goal when Caolan Devlin blazed over in the first half.

Aaron McAlynn kicked two balls forward in the second half to mix up the play with the first resulting in a point from an Anthony O’Neill advanced mark.

It wasn’t enough with a controlled Bellaghy edging out a game that lacked any bite throughout.

In terms of numbers, Bellaghy had two more shots at the posts than Loup and both goalkeepers had a similar success rate from their kick-outs, with Peter Stuart opting for longer options than Mallon.

As a converted outfield player, Stuart helped his side’s cause by pressing out behind midfield and when Loup worked their kick-outs shorter, they were met by a zonal line of Blue jerseys that soaked up the pressure at source.

While Loup were wasteful and forced their kicks. Bellaghy played their ball down the wing and when the door was closed, possession was dovetailed the width of the pitch until an opening was found.

After a minute’s silence to mark the 25th Anniversary of Sean Brown’s death, Bellaghy went on the attack from the throw-in.

After keeping possession for the best part of three minutes, a high tackle on Charlie Diamond handed Damon Gallagher the chance to kick the Tones into an early lead.

Roddy O’Kane started at midfield for the throw-in, but played the game at full-forward were won a free that Ciaran Devlin curled over to level matters.With the aid of the wind, Stuart thumped his kick-out long where Loup snapped up possession.

When Caolan Devlin won a free, he moved it quickly for his brother Ciaran to notch the home side into their only lead of the game after eight minutes.

Bellaghy then took control of proceedings with Eoghan Brown kicking a fine score off his left foot after winning the kick-out earlier in the move.

Peter Stuart effortlessly stroked over two 45’s inside a minute and Bellaghy were 0-4 to 0-2 ahead at the tenth minute marker.

A goal was always going to be a massive score in the game and Loup had a chance when Peter Stuart’s 17th minute kick-out in the direction of Dean Martin went over the sideline.

The ball was worked short to Anthony O’Neill who fed Caolan Devlin, but his close-range shot blazed over the bar.

Oisin McClafferty hit back for Bellaghy with a point on the overlap after Conleth McShane and Eoghan Brown were involved in the move.

The one time Loup were able to stetch Bellaghy, with Adam Hunter keeping the width, led to a Caolan Devlin point the game was wrestling about for supremacy.

Bellaghy engineered half their scores on the back of Loup turnovers, like point that put the Tones two points up, with Eoghan Brown taking advantage after McShane and Declan Brown combined.

It got even better for Bellaghy with Damon Gallagher nailed a free to open up their first three-point lead of the game.

Loup finished the half just a point behind thanks to frees from the Devlin brothers – Caolan and Ciaran.Once again Bellaghy were on the ball from the throw-in, but this time their patience move resulted in Lee Brady firing over a sweet score, with Damon Gallagher adding a free five minutes later, making the score 0-9 to 0-6 in the Tones’ favour.

The game of patience and chess continued, with neither team setting the world alight.

Conan Milne picked up a needless booking in the 39th minute with Caolan Devlin converting the free.

Loup never looked like getting another sniff of goal and Bellaghy were struggling to pull clear and when Aaron McAlynn’s diagonal ball found the run of Anthony O’Neill, he tapped over from the advanced mark and there was just a point between the sides.

Conleth McShane was blown up for taking too many steps, with Jason Rock going on the counter-attack and Caolan Devlin bringing the sides level for the first time in 35 minutes.

With O’Brien tucked behind midfield, Loup were hoping to soak up the pressure and go after the game on the break.

Bellaghy kept possession well enough to stay in control of the game and when Charlie Diamond kicked the Blues into the lead, they were on their way to victory.