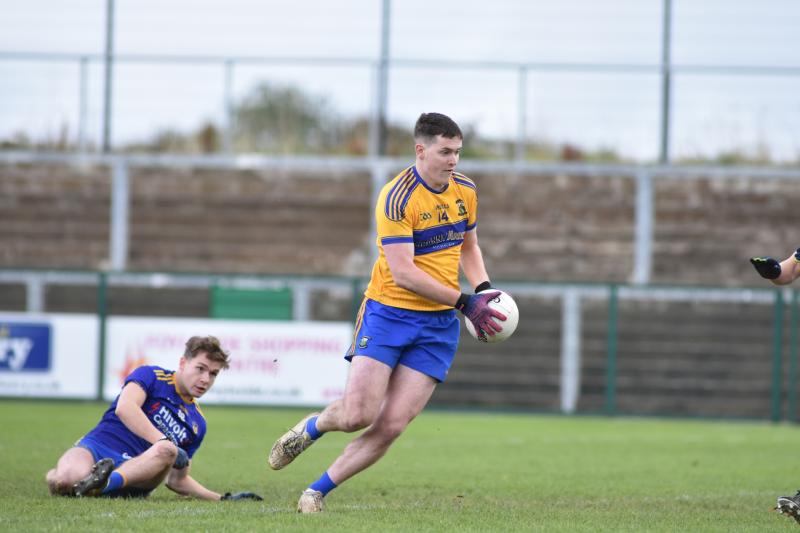 Castledawson went two points clear at the top of the IFL with a comfortable win over a depleted Lissan side on Saturday afternoon.

With the wind at their backs, St Malachy's dominated the opening half and led by 0-12 to 0-4 at the break, but the visitors pushed on well at the start of the second half.

A James McKee goal breathed life into their challenge, and further points from Iarlaith Donaghy saw them close the gap on their opponents.

Lissan had a penalty shout denied, and after Conor McCrory received a second yellow, a Niall McNicholl goal for Castledawson put the result beyond doubt.

Foreglen nudged themselves ahead of the chasing pack into second place in the league after edging an evenly-matched battle with Drumsurn on Saturday.

Three Cathair O'Connor points set the visitors on their way in the first half, but the opening exchanges were point-for-point, the sides entering the break with Foreglen leading 0-7 to 0-6.

A second half goal from Shea Murray raised the home side's hopes, but O'Brien's outscored their opponents by 0-8 to 0-6 in the second half to claim a narrow victory and second spot in the league.

A late Cormac Quigley point saw Limavady claim their first victory of the season at home to Glenullin, who in the process suffered their first loss of the campaign.

Reigning junior champions Desertmartin picked up their first points of the season with an away win over Greenlough on Saturday.

Both sides were missing their talismanic forwards – Niall Loughlin and Lachlan Murray – who were on county duty with the county side.

Despite a 1-2 haul from substitute Seoirse Lagan, the Plunkett's suffered a three-point defeat that leaves them second from bottom after three games.

Faughanvale picked up their first win of the season as they came away from neighbours Slaughtmanus with seven points to spare on Sunday morning.

The hosts opened the scoring, but Faughanvale hit back through a Kevin Martin point, before Dean Curran netted the game's opening goal to put the visitors in control.

Curran added another point, before James Moore rounded off the half with the away side's second goal to leave them 2-2 to 0-2 ahead at the break.

The Faughanvale men played the whole of the second half with 14 men having lost a player to a red in the opening phase of play. The home side started the second half well, hitting two unanswered points to close the gap to four, but Faughanvale hit back through Cathal O'Kane, Jordan Curran and Kevin Martin.

Slaughtmanus again fired over a brace of points in response, but Faughanvale finished strongly, a Kevin Martin brace and Conor McGuinness point giving them a commanding 2-8 to 0-7 win.

There were wins too for Dungiven and Kilrea.