Alex Doherty starsed as Glen took the points at the weekend. 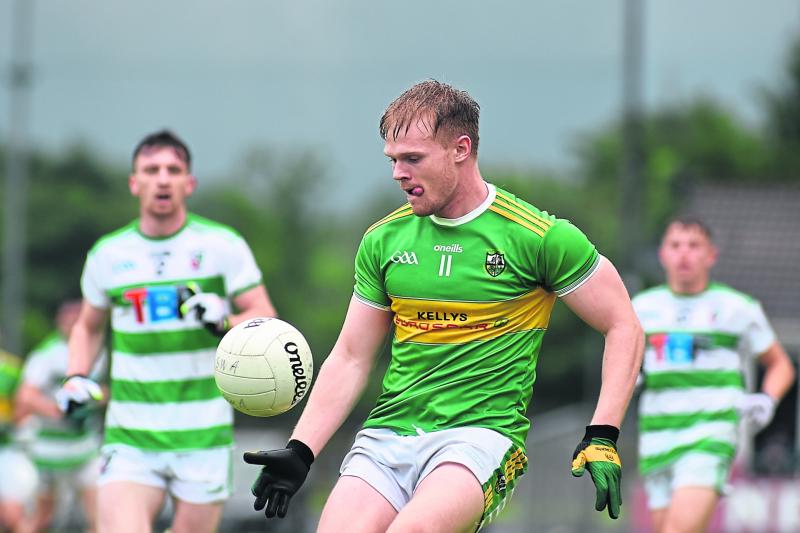 Alex Doherty was instrumental for the Watties. Pic by Mary K Burke.

Goals from Danny Tallon and Alex Doherty proved the difference as Glen pulled away for victory at a damp Davitt Park on Thursday night.

Malachy O’Rourke’s side had the wind for the first half and led by four points at the break. Swatragh fought back gamely early in the second half until Danny Tallon slotted home a 39th minute penalty to turn the game.

An injury ravaged Swatragh did have two goal chances themselves, but were always going to struggle without finding the net.

Glen completed a League and Championship double last season and despite missing their county contingent, they’ve won all five games this season.

Swatragh won the Larkin Cup earlier in the year, but have only managed a win over Steelstown and a draw with Coleraine of their six league outings to date.

Both teams lined out with six players that started Glen’s 2-12 to 0-8 win in last year’s championship quarter-final win over the Davitts.

There was a full senior debut for Jody McDermott at full back for Glen after making his return from a knee injury.

Glen hit the front after going on the attack from the throw-in and Paul Gunning floating over from a sweet strike on the wing.

Swatragh goalkeeper Ruairi McGurk, who went long on 11 of his 17 kick-outs over the hour, worked his first short with Swatragh engineering a move to get Francis Kearney into space to pull the trigger on a fine equaliser.

Both teams played with close to the conventional formation. Danny Tallon and Fergal Coyle pulled out deep for their respective sides.

It was Tallon who helped create the next score. After picking up possession and laying off, he headed on the attack where Ciaran McFaul’s left footed pass over the top created a mark and Tallon curled between the posts.

It was the last score for 10 minutes as play ebbed the flowed. Midway through the half Cathal O’Kane and Francis Kearney were involved in a move that saw Fintan McGurk level matters at 0-2 each.

Warnock worked his kick-out short and when Glen built their attack it was Jack Doherty who dissected the posts and Glen were back in the lead.

They should’ve found the net moments later when Cathal Mulholland played Alex Doherty through on goal. McGurk helped narrow the angle and Doherty was forced to kick across him with the post coming to the ‘keeper’s rescue before Doherty pulled the rebound wide of the post.

McGurk shanked his kick-out into the path of Gunning who kicked over with ease for a 0-4 to 0-2 lead.

Swatragh, who worked five of their points from turnovers, kept themselves well in the game and a Niall Coyle point had the margin back to a single point before Francis Kearney levelled matters from a free in the 22nd minute.

A long Warnock kick-out was won behind midfield by Jack Doherty, but after Swatragh did well to close up their defence Glen were forced into patient football before McFaul kicked a long-range left-footed score to put the visitors into a lead they never lost.

Tallon put two points between the teams from a free before Glen had a let off. Ruairi McGurk ferried the ball out to midfield before Niall Coyle and Fintan McGurk injected pace into an attack that saw Kevin McAllister fist the ball wide from right on top of the goalkeeper.

Glen finished the half with a flourish with three points in as many minutes. A Michael Warnock interception led to a second Jack Doherty point, with his brother Alex adding two in stoppage time, the first coming after Cathal Mulholland and Tiarnan Flanagan combined on the way out of defence.

Glen were 0-9 to 0-5 ahead at the break, but Fergal Coyle had the ball over the bar 30 seconds into the second half.

When Glen lost the kick-out, Fintan McGurk’s high ball dropped short and Francis Kearney, now plonked at full forward, flicked the ball over the bar from right on top of goalkeeper Warnock. It could’ve easily ended up in the net as Swatragh enjoyed their best spell of the game.

When Francis Kearney curled over a free to make it 0-9 to 0-8, we looked like we had a game on our hands before Glen hit their first goal.

Excellent defending from Tiarnan Walsh closed out Jack Doherty initially, but when Glen switched the play, Tallon found Jack Doherty back in front of goal and when he was fouled, Tallon made no mistake from the penalty.

Glen could’ve added a second goal moments later only for a Niall Coyle block, with the resulting ‘45’ worked short for Tallon to swing over to open a 1-10 to 0-8 lead.

Just when they needed a goal, Swatragh were presented with a chance. Walsh and Francis Kearney created the opening, but Kevin McAllister was denied by goalkeeper Warnock from point blank range.

Swatragh looked to have grounds for a penalty moments later for a foot block, but had to settle for a ‘45’ which Kearney glided between the posts.

Glen then hit their second goal. A diagonal ball from Eunan Mulholland picked out Flanagan who laid found Cathair Glass and after this shot was saved by McGurk, Alex Doherty finished at the far post from the rebound, putting Glen 2-10 to 0-9 ahead after 46 minutes.

Jody McDermott marking his debut with a point at the end of a foray into the attack.

James Kearney and Tiarnan Walsh did manage late Swatragh scores, but they’ll look back on a game that had enough turning points for a more favourable outcome.

MAN OF THE MATCH - Danny Tallon

Francis Kearney kicked five for the ‘Swa, with Fergal and Niall Coyle showing well. It was a creditable first start for Jody McDermott. Glen’s half-back line was involved in much of their play, but Danny Tallon had the biggest say. Outside of his 1-4 tally, he was involved in the move that led to the penalty.

SCORE OF THE GAME - Coyle point

Swatragh were trailing by two points when Cathal O’Kane took the ball out of defence. Tiarnan Walsh was involved in the move that led to Niall Coyle kicking a great score at the end of a well-worked move.

After training by four points at the break, Swatragh grabbed the first score of the second half and had Glen penned in their own half, adding two further scores. With the breeze at their back, they looked well placed until Danny Tallon’s 39th minute penalty put Glen 1-9 to 0-8 ahead.