Tyrone stoke rivalries on all fronts, not least along the Sperrins. 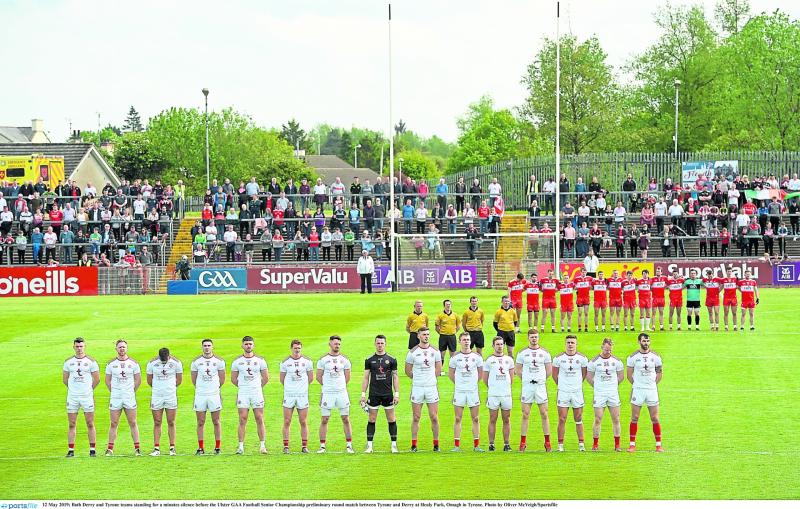 Tyrone and Derry lining up before their 2019 clash. Pic by Oliver McVeigh/Sportsfile.

In his wisdom, he talked about how the sheer jealousy of seeing Slaughtneil rise up and win a Derry championship with the aid of brilliant facilities had driven Glen to be a better version of themselves.

That’s the circle of life in the GAA. And perhaps therein lies part of the secret behind Tyrone’s success now that they’ve figured themselves out.

The county is just fields and fences. If there’s a sense about them that they’re spiky, that they view the outside world with suspicion and feel everyone else is out to get them, it’s no wonder.

When you ask Derry supporters who they most like to see losing, it’s almost always Tyrone.

If you ask Armagh fans the same question, you get the same answer.

For Donegal, there’d be a bit of Derry in it but there’s a lot of it Tyrone.

If they feel like everyone hates them, it’s because they do.

In the north-western corner of Tyrone, it’s all about Donegal. Cathal McShane’s country, Leckpatrick, is six miles from Lifford. 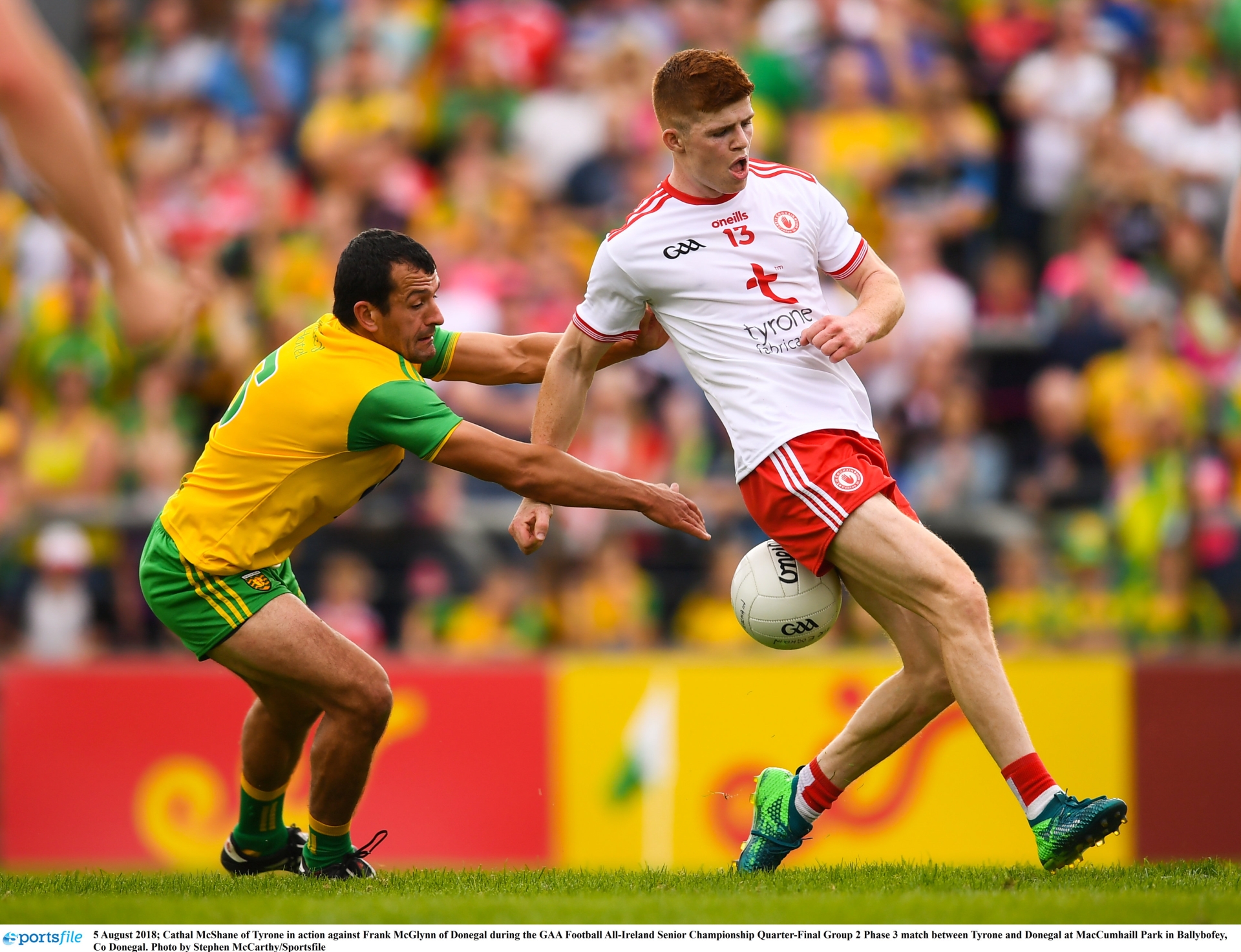 Ronan McNamee was one of three Aghyaran men on the panel until last year, when the other pair opted out having failed to break through.

McNamee’s mother Anne is a native of Doochary, and his father Johnny comes from Glenfin, both in Donegal. The son is bonafide Tyrone and for them, the rivalry is different.

Just two weeks ago, the All-Ireland champions began their defence against Fermanagh.

Sitting injured and watching were Mattie and Richie Donnelly. The pair hail from Trillick and went to school at St Michael’s across the county line in Enniskillen.

Richie found himself pulled into the school’s management team as they won a first ever Hogan Cup title a few years ago. They would know the Fermanagh lads as well as they’d know their own.

Work on across then and into the Moy, the heartland on which much focus fell during the noughties and the famous Tyrone-Armagh battles.

From Plunkett Donaghy through the Cavanagh brothers, Philip Jordan, and no less Collie Holmes – a Moy native but who played much of his club football for Armagh Harps – their eyes were all focussed in only direction. 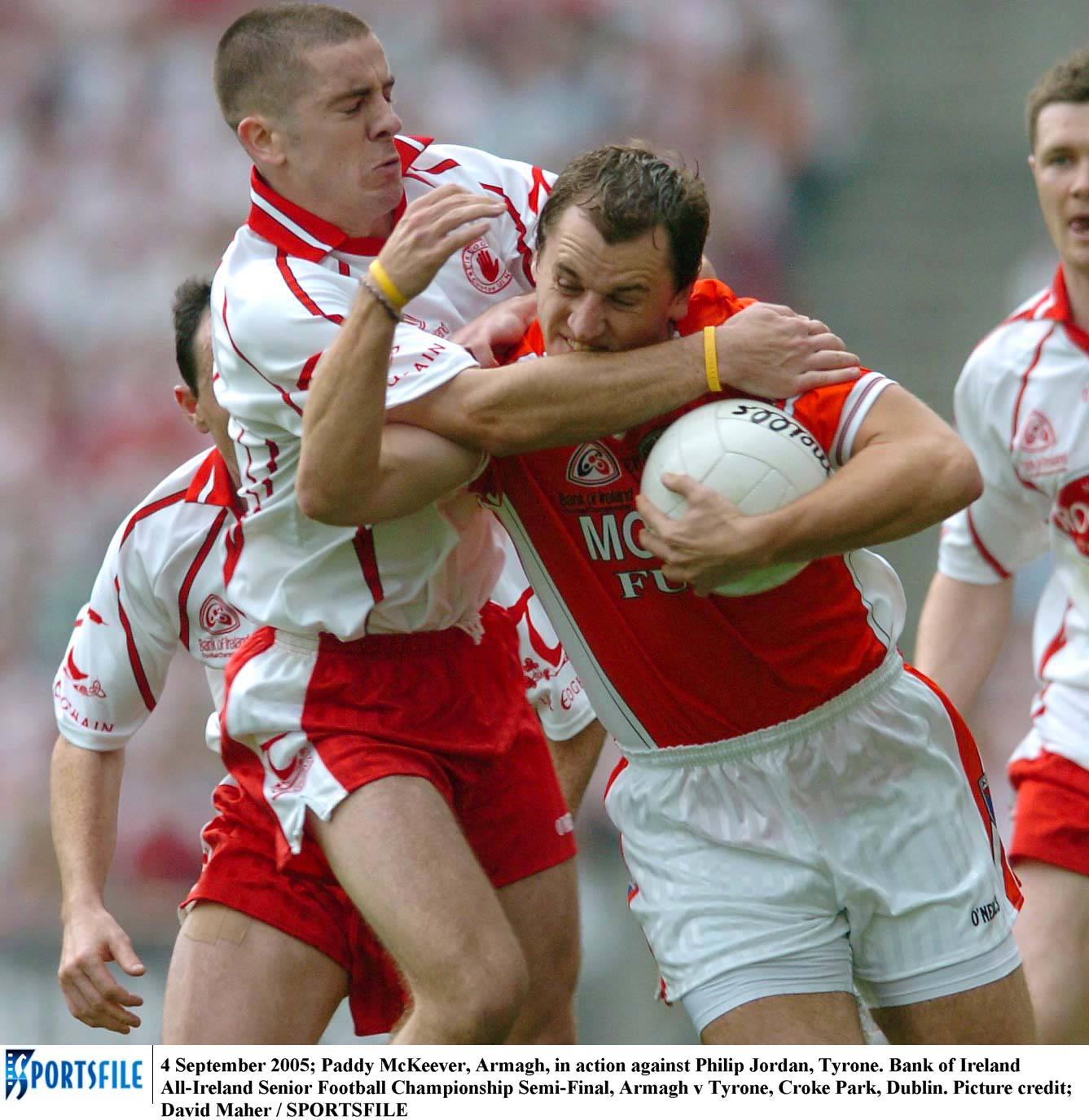 Jordan once recalled in an RTÉ column that before The Moy club changed the direction of their pitch, “yyou could kick a point from Tyrone and the ball could land in a different county. The River Blackwater was all that divided the two.”

Reporters would flock to the village that straddled football’s great rivalry in the early 2000s, hoping to unpick the family ties and rows and binds that made for such a unique story.

And then there’s Derry.

From Strabane-Derry City, Claudy-Donemana, Park-Plumbridge down through the interwoven Sperrins, you find yourself at the real hub of it down by the loughshore. 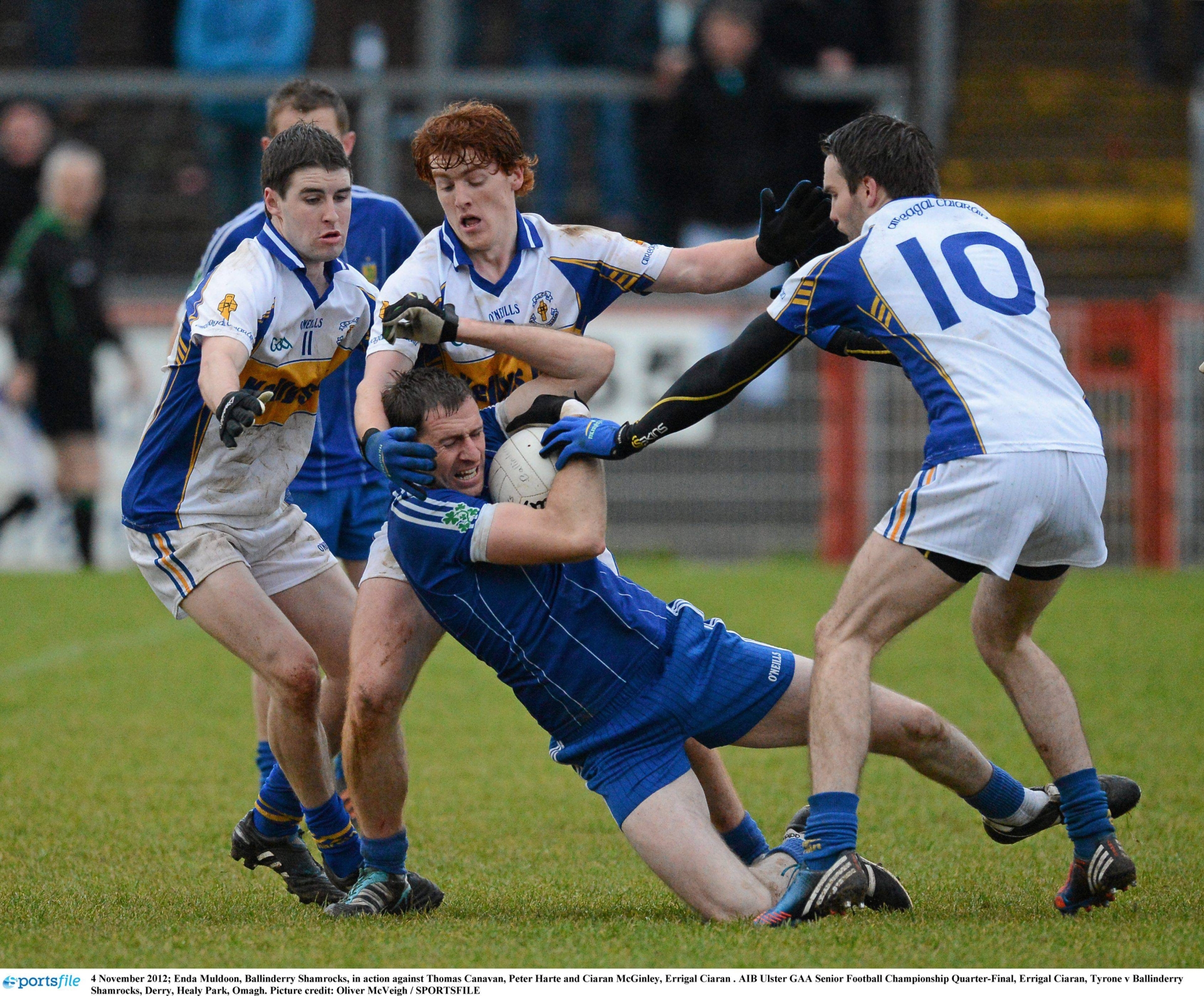 Ballinderry's Enda Muldoon, who is on the current Derry management, comes under pressure from Tyrone's Errigal Ciaran men in the 2012 Ulster SFC quarter final. Pic by Oliver McVeigh/Sportsfile.

Ballinderry is the beating heart, where the hatred once turned the river blood red, but whose pulse had slowed up badly in recent years as Tyrone pulled away on to a different level.

It might be sixteen years ago but Derry supporters have had few such joyous days this century as keeping the All-Ireland champions scoreless for 41 minutes on their own patch.

Enda Muldoon, now on the Derry management team, got the goal that day. As a county, we’ve had very little else to live off championship wise in the time in between.

Tyrone’s good neighbours on every side keep every footballing pocket of the county honest. A lot of its strength still comes from the eastern side and down towards the Armagh border but that the GAA has such a strong presence throughout the whole of nationalist Tyrone is one of their great strengths.

But all that they’ve achieved in that decade has driven Derry to get their own house in order. 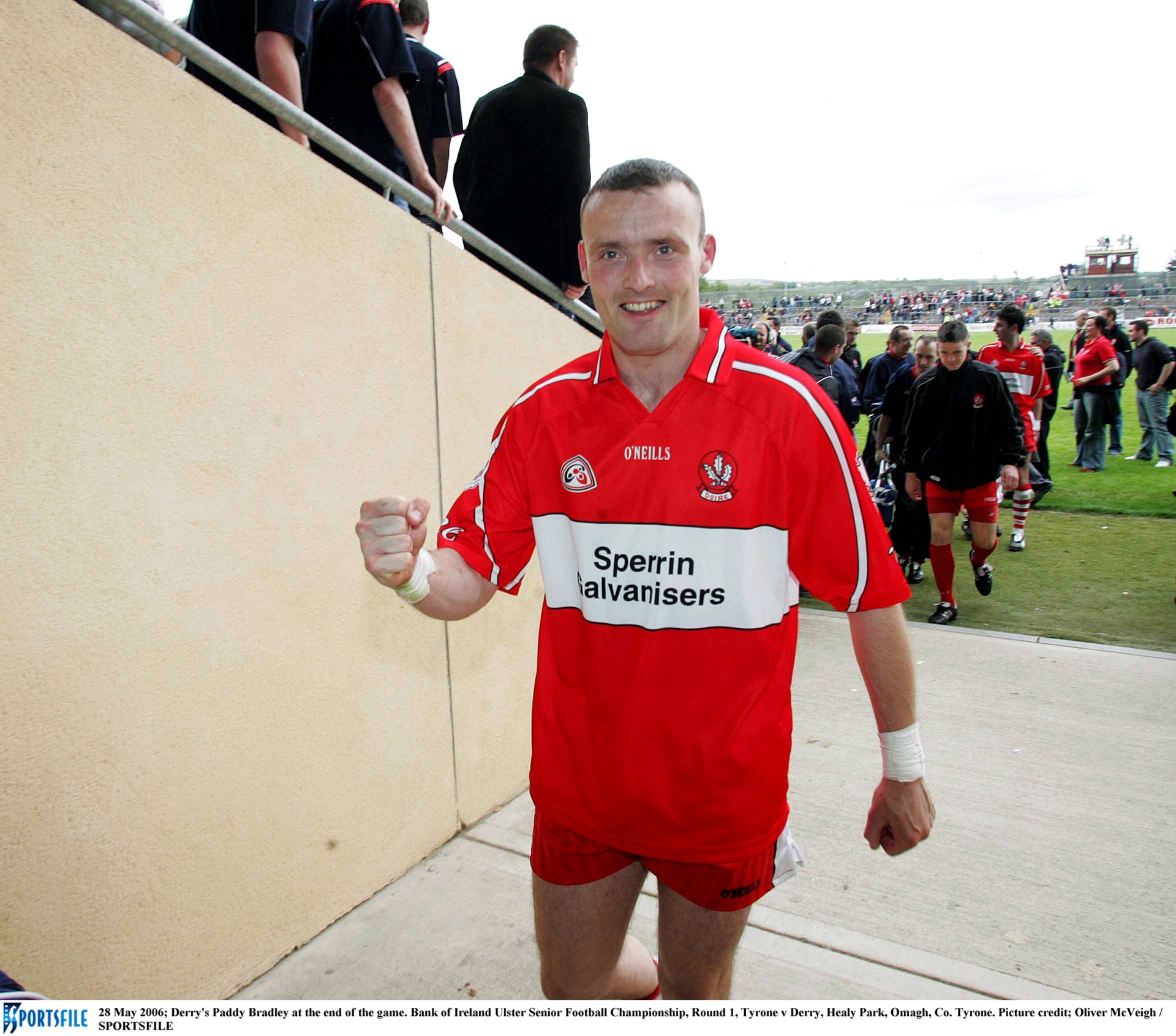 Paddy Bradley and Derry were waiting for Tyrone in 2006. Pic by Oliver McVeigh/Sportsfile.

The Oakleafers haven’t won every underage crown and never will but you’re going back almost a decade now to find a time when the county wasn’t properly competitive at minor level.

U20 success hasn’t followed, the tug-of-war over whether players should graduate sooner affecting that. To watch the Canavans and Cushes and McGleenans and Donaghys win an Ulster U20 title on Friday night was another reminder, barely needed, that Tyrone aren’t going anywhere.

That they share fences with so much of the rest of Ulster will keep everyone else honest.

2006 is seen as Derry's zenith in their most fierce local rivalry.