2006 is seen as Derry's zenith in their most fierce local rivalry. 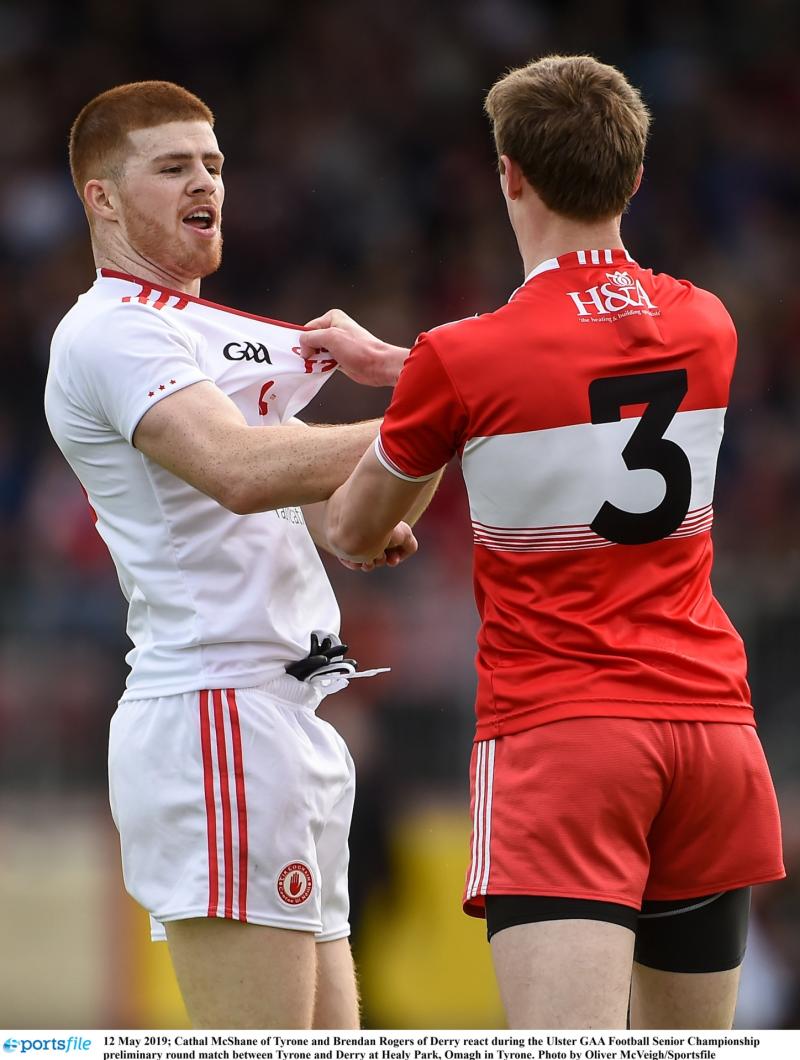 Cathal McShane and Brendan Rogers get to know each other during the 2019 meeting between the sides. Pic by Oliver McVeigh/Sportsfile.

One look at this fixture and it’s impossible not to think of Derry’s men of 2006.

Tyrone were All-Ireland champions and Paddy Crozier’s horses for courses approach kept them scoreless for the entire first half of an ambush that oxtered the Red Hands into the murky waters of the back door. 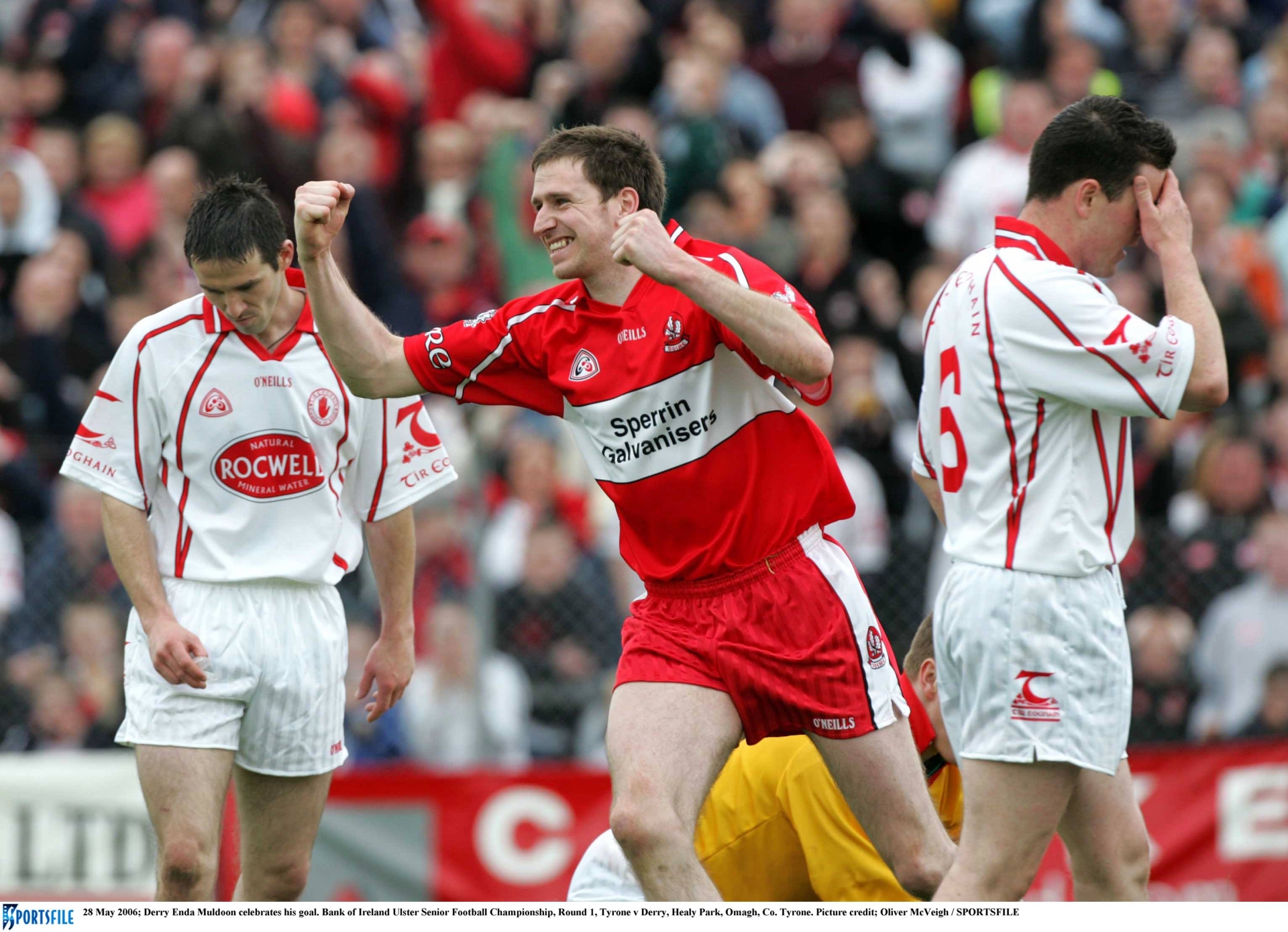 Enda Muldoon wheels away after his goal in the famous 2006 win. Pic by Oliver McVeigh/Sportsfile.

Since then, Derry have lost the four meetings.  Tyrone handed them an eight-point defeat at Casement Park in the 2009 semi-final. It was followed up by two 11-point maulings at Celtic Park in 2016 and 2017.

Then there was 2019. A Shane McGuigan goal levelled matters after 55 minutes before ‘Sammy’ Bradley nosed Derry in front on a baking afternoon in Omagh.

But Derry had just poked the bear.  When two Derry players went for the same ball from Morgan’s kick-out, the ball fell into the lap of Frank Burns.

His crossfield pass found impact substitute Darren McCurry who bagged a momentum-changing goal with virtually his first touch to kick start a 1-5 to 0-1 spell that blitzed Derry. 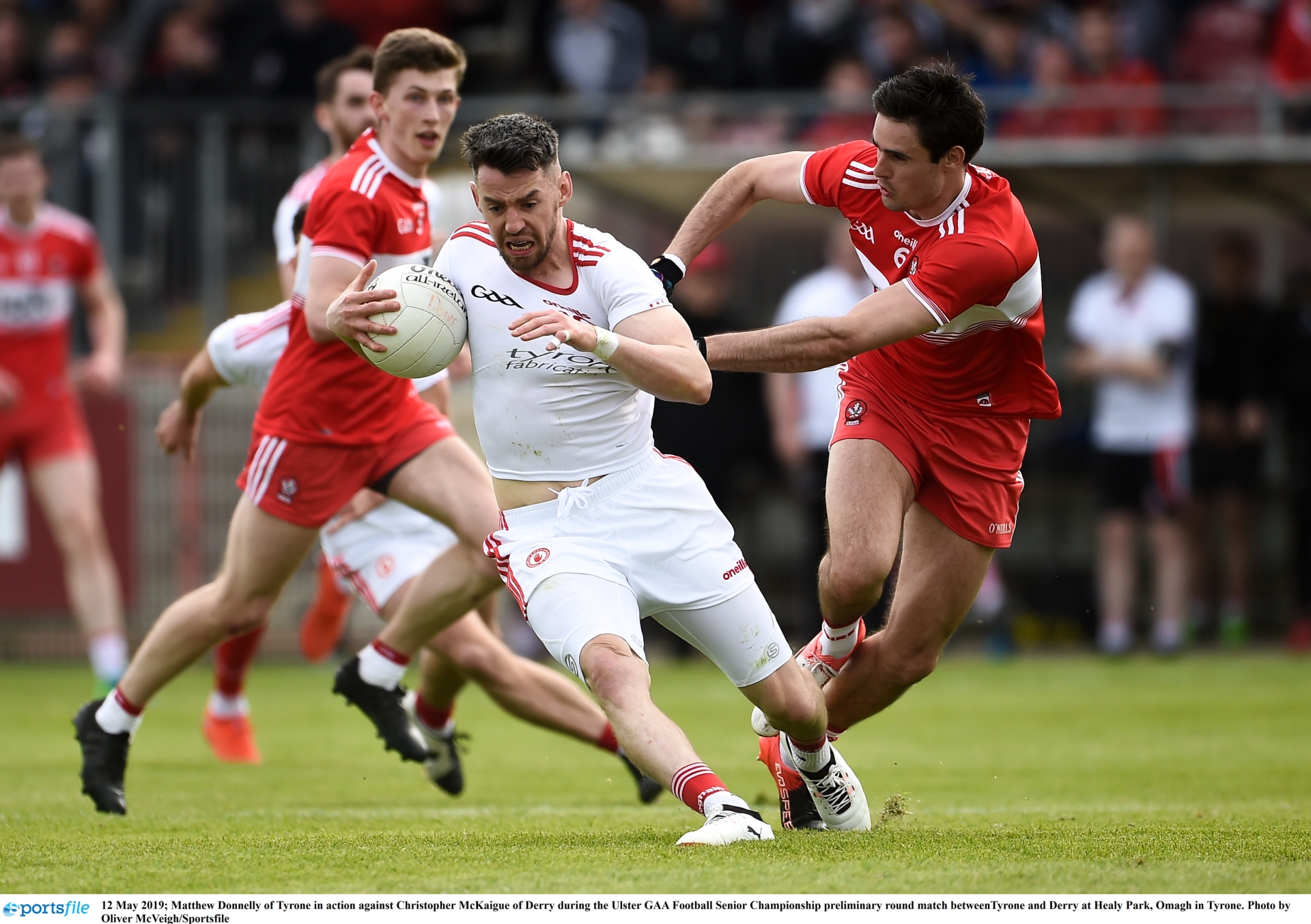 With the Covid-19 lockdown that followed Derry’s qualifier defeat to Laois, that afternoon in Omagh seems a lifetime away. And in terms of Derry’s squad, it is.

Only six of the players used by Damian McErlain are expected to feature under Rory Gallagher on Sunday, with goalkeeper Thomas Mallon now the goalkeeping coach.

Derry gave Armagh too much of a head start in 2020 to make anything of their Ulster campaign.  By the time they entered Ballybofey last season, they were men on a mission.

Any only for fluffing their lines in front of goal, they’d have been out of sight.

It looked to be heading for extra-time until Paddy McBrearty escaped Chrissy McKaigue’s expert marking job to kick the winner.

The other part of the disappointment was how Derry failed to engineer a shooting opportunity in the dying seconds before running out of time. 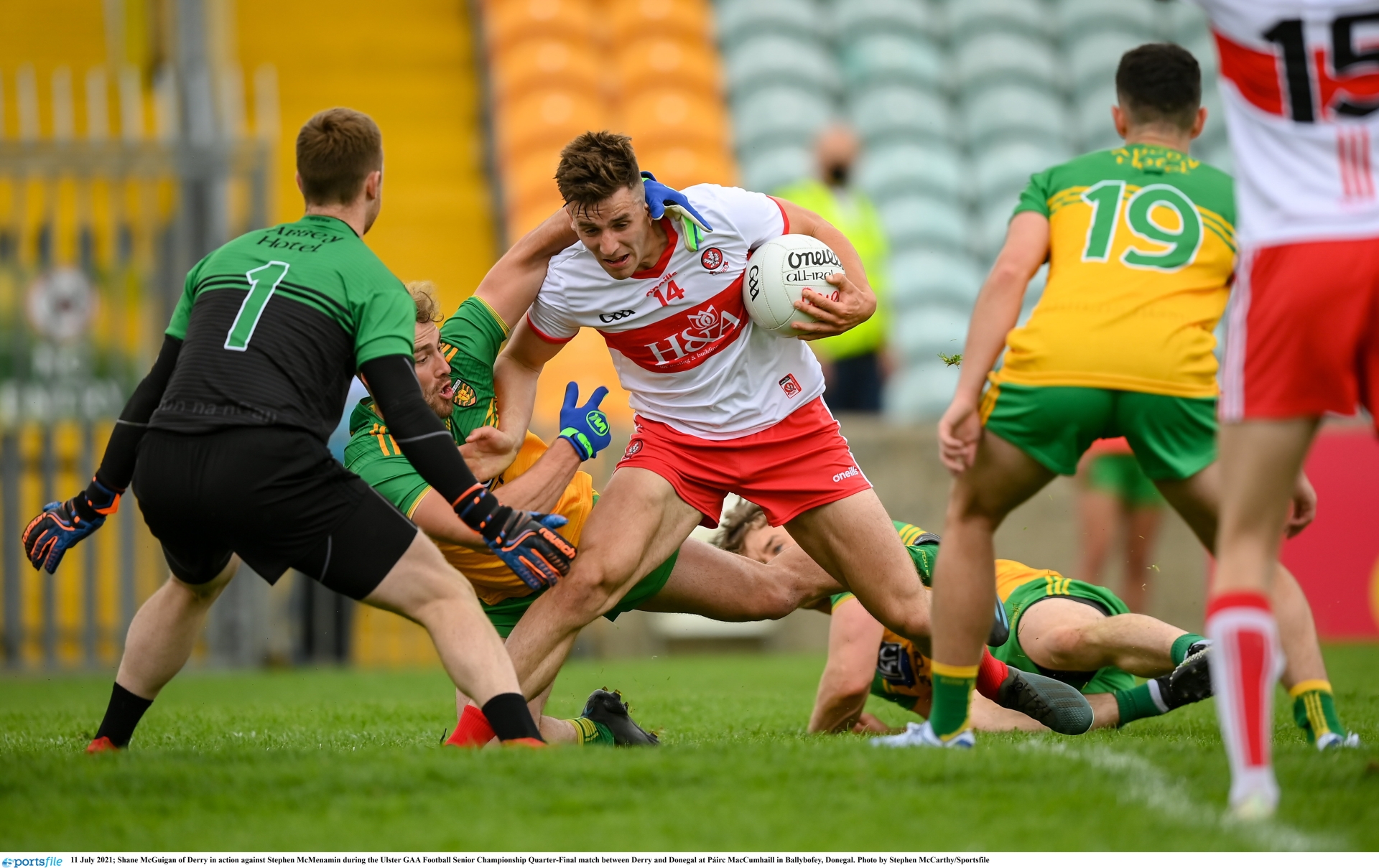 Brendan Rogers spoke in an interview about how it was the best prepared Derry team he has been involved in. The body language afterwards told no lies. Derry were utterly devastated. They were convinced they’d win.

Tyrone went on to win Sam the hard way, with a tough battle against Donegal before an epic win over Monaghan and a win over Kerry that took everyone outside the Red Hand camp by surprise. And they were never going to lose the final to Mayo.

An injury to Mattie Donnelly casts a shadow over their championship campaign this time around, perhaps greater than the much talked about exodus from squad.

Peter Harte will be expected to take his place after a recent appendix operation and, as expected, GAA officialdom has overturned Conor McKenna’s red card. 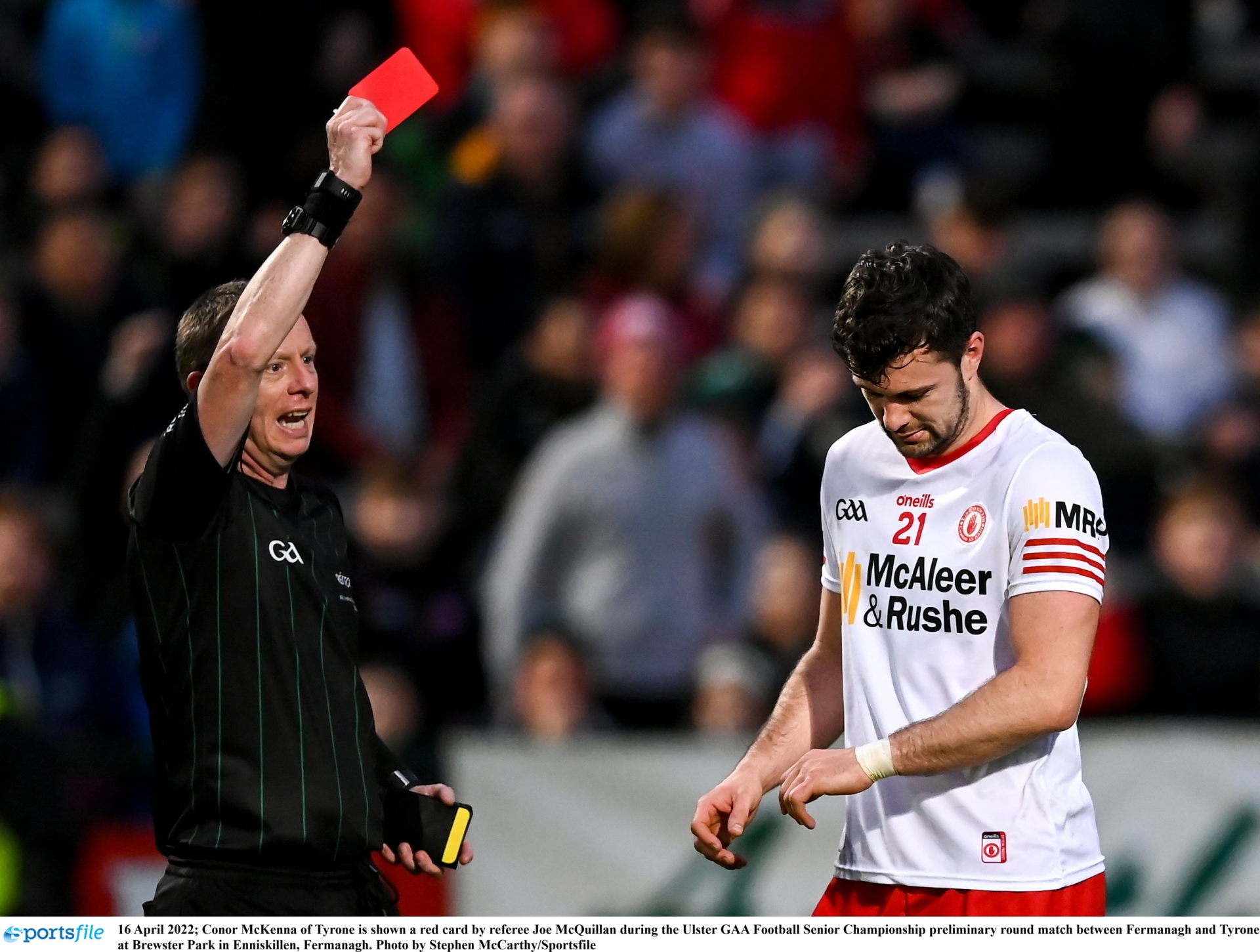 Derry have had their own problems with Ciaran McFaul opting out of the panel. Oisin McWilliams broke his jaw against Galway and their league promotion evaporated to a glimmer of a chance in the space of seven days.

Michael McEvoy and Jack Doherty were others to step away from the county scene that could’ve added to Derry’s athletic power to match Tyrone.

Enda and Matthew Downey have still not returned to full training, despite the former playing 15 minutes for the u-20s in their defeat to Cavan.

Midway through the league, there was a general feeling across the county of Derry having an exciting championship campaign ahead of them. Then, after to failing to beat either Galway or Roscommon, the dark cloud of pessimism descended. 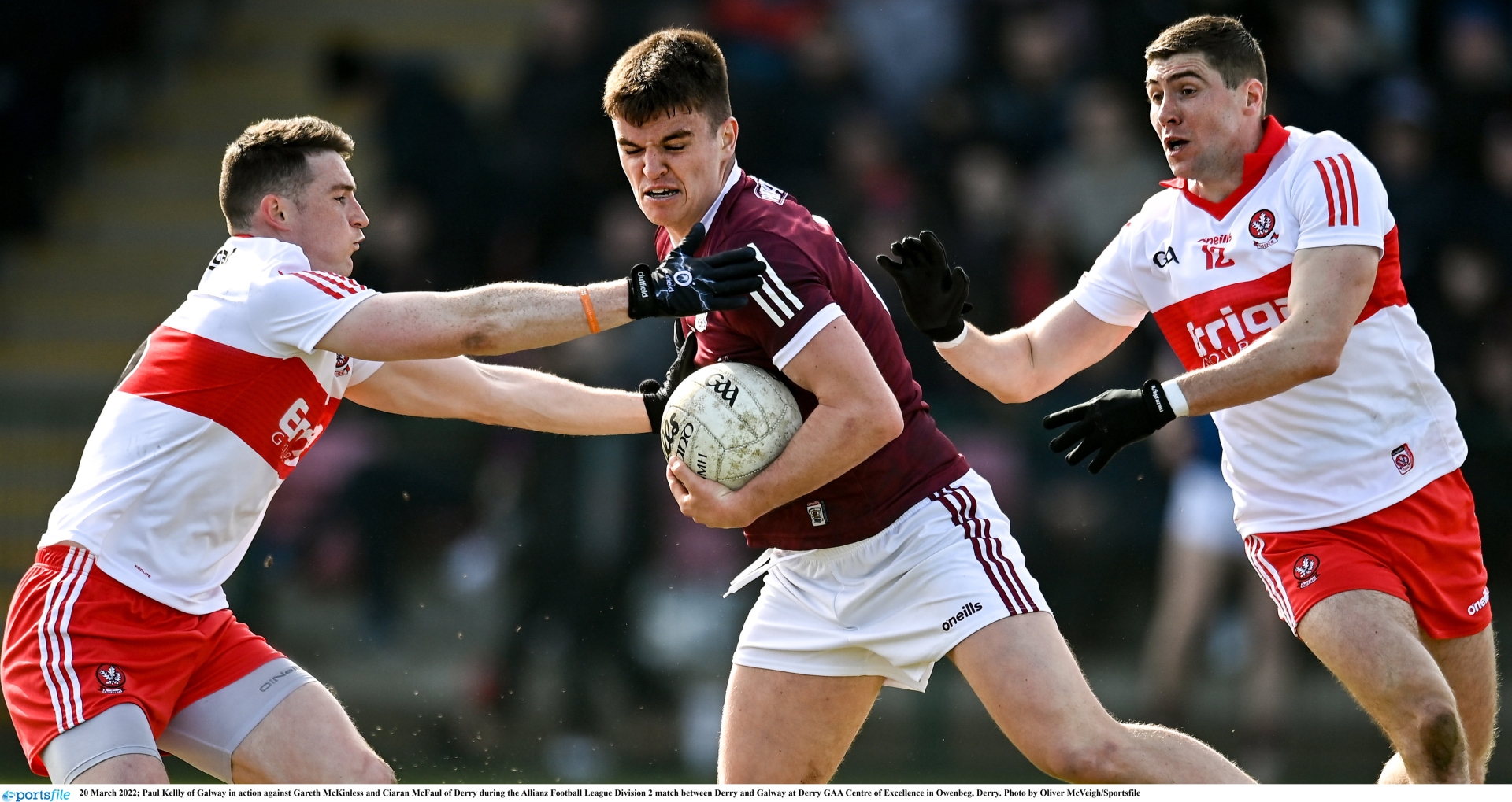 Mutterings of Derry not being ready for the top flight began to arise, but reports of a gruelling block of training coming along backs up the theme Rory Gallagher has always rolled out since Derry emerged from Division Three – you are judged in the championship.

Much has been written about Derry’s reliance on Shane McGuigan, but Darren McCurry has been Tyrone’s leading man in attack all season. Cathal McShane, who had only one point from play, took a bit of the pressure off McCurry in the win over Fermanagh.

Chrissy McKaigue will almost likely be tasked with picking up McShane with Rogers on McCurry, but the lessons of the Galway game must come home to roost.

Much of the talk was about Odhran Lynch’s kick-outs in the first-half. Yes, he did go short too often, but Derry missed Paudi McGrogan from their half-back line with his switch to full-back. And overall, Derry didn’t break out of defence with any purpose.

On the day, it was the movement of Damian Comer that pulled Rogers around Owenbeg and with it went any structure to Derry’s defence.  It’s 35 minutes that will have been watched over and over since, with this weekend in mind. 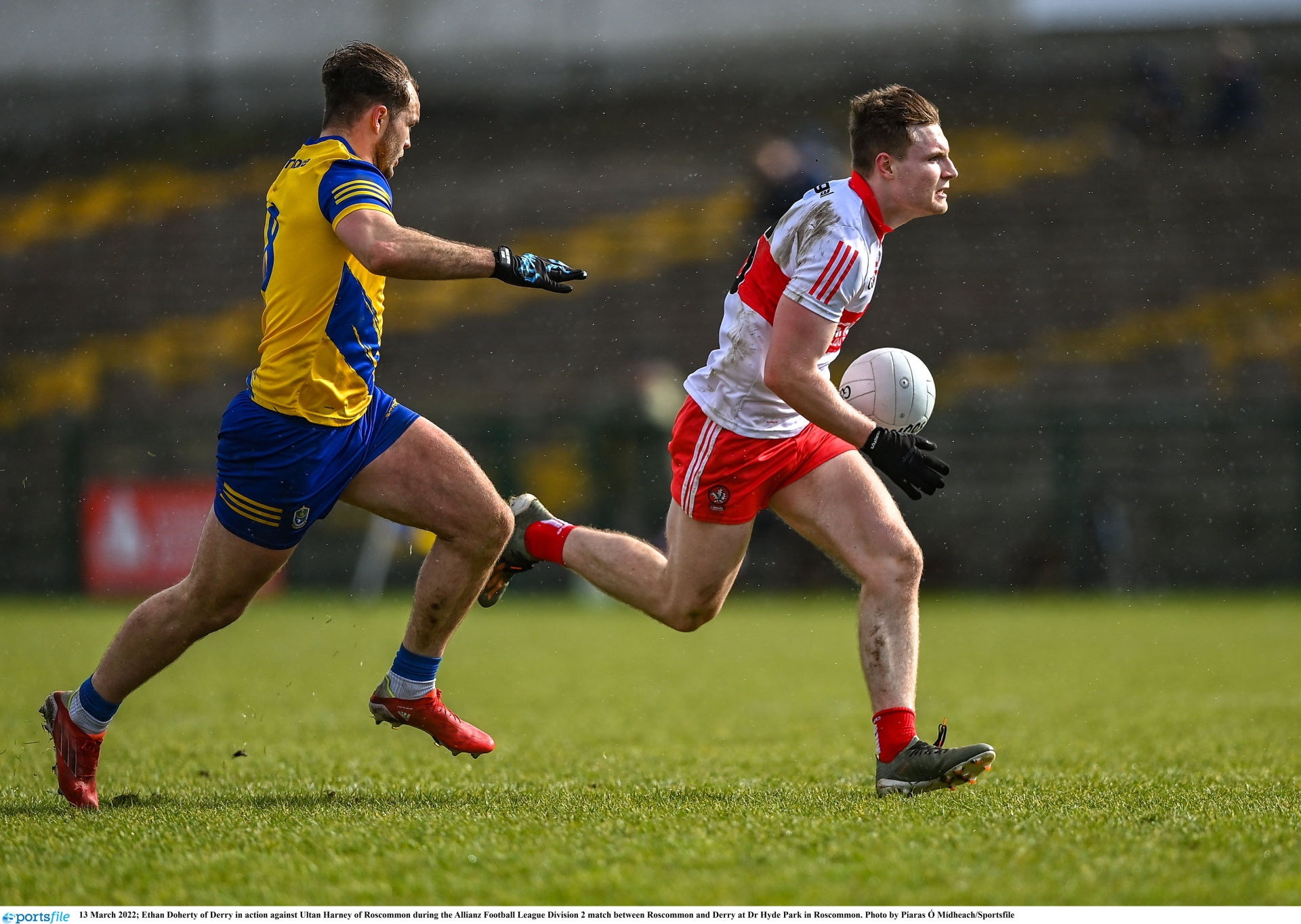 McGrogan will almost certainly play as the dedicated centre back, for two reasons.  If Rogers goes on McCurry, then he will have to follow him as far as midfield where he can pass him off to possibly Ethan Doherty.

The second reason – Conor Meyler. If Gareth McKinless picks him up, it will be another chance of Derry’s middle being left open.  McGrogan and Derry’s defensive midfielder, Conor Glass, will to make sure the centre is always manned.

Derry can’t afford to leak a goal, as they have failed to find the net themselves in the last two championship outings under Gallagher.

Conor McCluskey will be the man for Darragh Canavan, which leaves Conor Doherty to play a role in picking up Peter Harte. It's going to be like 2006 all over again. Horses for courses.

Then there is the midfield area, where Emmett Bradley and Glass will have to impose themselves on Kilpatrick and Kennedy. It’s as simple as that.

Sunday is going to be a combination of chess and all out war.  The recent form points to a Tyrone win, but Derry have the pieces to ask them all the right questions.

And in Rory Gallagher, they have a manager that can always get a team pitched for that one off game. A day like Sunday.

It won’t be one for the purists or the fainthearted, but Derry to find a way to a first Ulster Championship victory since 2015.

ULSTER SFC: All the stats ahead of Tyrone v Derry

Details of the counties' top scorers and highest appearance holders.