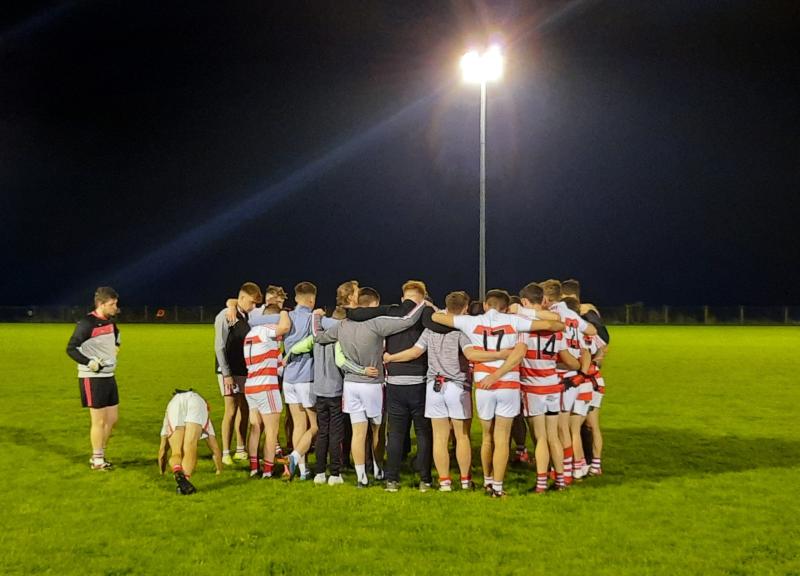 Points from impressive wing back Eunan McElhennon and Lachlan Murray was enough for Desertmartin to eke out a victory over a sticky Ballerin challenge in a cagey affair on Thursday night.

It was an hour devoid of any excitement, with both teams playing a defensive brand of football with the handbrake on, with half and eye on a potential clash in the knock-out stages.

Ballerin were without injured Jarlath Bradley with a troublesome hamstring, while a foot injury also ruled out the league's ace attacker Gary Keane who is a doubt for the knock-out stages. Antoinn Bradley is also out for the season.

Desertmartin made two changes to the team that beat Doire Colmcille. Connor Monaghan was preferred to Connor Shiels in defence, with Gavin McGreevy coming into the attack for the injured Ryan McEldowney. Callum Ormsby will miss the rest of the season after having a torn cruciate ligament injury confirmed in midweek.

Like their previous game, Gregory McGovern played as sweeper, where he barked instructions at his team from start to finish. Lachlan Murray and Enda McGuckin played in a two-man inside line, with Adie Trainor swapping inside later in the game when a calf injury forced McGreevy out of the game and Murray came out to centre forward.

In a game where neither goalkeeper lost a kick-out (with most worked to a free defender) it was a case of who used the ball better. Desertmartin were marginally more polished in possession, but had more about them in attack, despite going 22 minutes without a score.

Looking over the wire, was the injured Gary Keane who hit an average of 1-8 per game during the league and Ballerin missed him big time. They did have more joy when they ran at Desertmartin in the third quarter when they ran at the Desertmartin defence where they won three frees to work themselves back in the game.

The winners had Eunan McElhennon's pace coming from deep, but when they turned the ball over, their half-forward line sucked back behind the ball. On occasions, Lachlan Murray won the ball on the wing, but had no outlet. That said, they were in control until Ballerin turned the heat up a notch in the third quarter.

Desertmartin set off with a bang inside the first minute. Gregory McGovern got on possession after the throw-in and before he could trot back to his sweeper spot, he humped a high ball to Lachlan Murray which was touched down and Enda McGuckin fired over the far from close range with a hint of goal on.

It was a false dawn, as the game was soon bogged down into a sustained spell of possession football until Gavin McGreevy's inch-perfect pass found Murray for a 10th minute point. Both teams mirrored each other in terms of setup and McGreevy soon picked out Murray again, but he was shot down by the Ballerin defence.

Paul Ferris hit the first of three points from frees as Ballerin trailed 0-2 to 0-1 at the first water-break, with Eunan McElhennon curling over the score of the game with outside of his right boot on the restart.

McGreevy and Enda McGuckin were involved in a neat hand-passing move which saw Lachlan Murray open up a 0-4 to 0-1 lead. The Martins had a half chance for goal, but the squared fist-pass was overcooked and Shane Ferris played in Mark Ferris for a score at the end of a swift Ballerin counter-attack.

Desertmartin's build-up was laboured, but Eunan McElhennon always had them on the front foot. His possession led to Enda McGuckin coming around on the loop before popping over for a 0-5 to 0-2 lead at half-time.

McElhennon won a free which Murray curled over early in the second-half before Ballerin had their spell. In an eight minute spell, they won three frees, with Paul Ferris (2) and Shane McIntyre cutting the gap to a single point, 0-6 to 0-5, after 40 minutes.

Murray, Paul McGovern and Adie Trainor hit wides in succession to keep Ballerin in the game, with the home side looking like they had the bit between their teeth to go on and win the game.

A Eunan McElhennon point on the run and a monster strike from the wing by Lachlan Murray was enough to see Desertmartin into a winning position before Paul Keane hit a late consultation score.

There were still jittery moments for Kevin O'Neill's men. Martin Breen squandered a chance to seal the game his fisted point attempt somehow went to the left of the posts and they hung on when a later Paul Keane '45' curled with Ballerin's last throw of the dice.