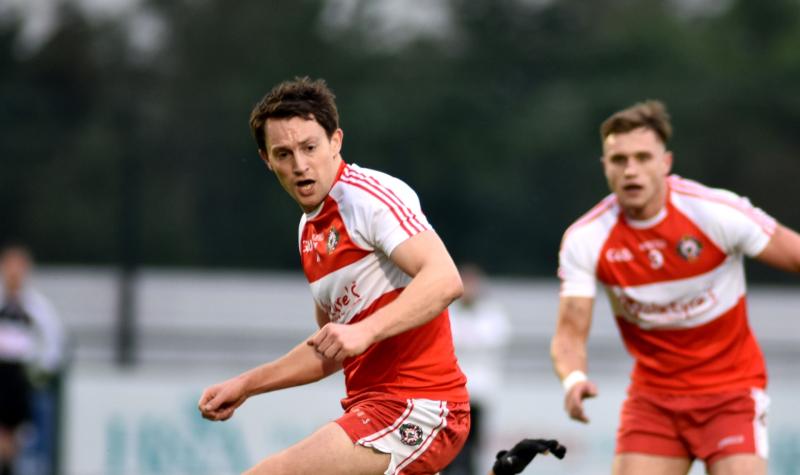 A free from James Kielt earned Kilrea a draw in Sunday's top of the table clash with Dungiven.

Dungiven 0-12
Kilrea 1-9
Kilrea played against the strong breeze in the first half and Paddy Quigg had the ball over the bar in the first attack, squeezing over from a tight angle.

Quinn (from a free) and Daithi McLaughlin responded for Kilrea before Richie Mullan levelled matters after 10 minutes.

Then came the game's only goal. Charlie Kielt's pass found his brother James and Rory Maguire, on the overlap, took the ball before firing to the back of the net for a 1-3 to 0-3 lead.

Quigg and Niall Johnson put Kilrea five points ahead, but points from Paddy O'Kane and Conor Murphy cut the gap to a goal at the break, 1-6 to 0-6.

A foul on Paddy Quigg at the start of the second-half presented Kilrea with a penalty and a chance to stretch their lead, but goalkeeper Kevin Farren saved James Kielt's shot.

Kilrea then lost PJ McAleese to a black card and it took a full 14 minutes before a Marty Burke free registered the first score of the second half. Richie Mullan made it a one-point game from a mark and it was all to play for.

James Kielt pointed a 48th minute free before the home side had their period of dominance. Four points in eight-minutes minutes from Paddy O'Kane, John Mullan, substitute Conor Kelly and Sean McKeever had Dungiven two points ahead with one minute of normal time to play.

Kielt gave Kilrea a chance to save the game with a 30 metre free and when Paddy Quigg was fouled, on the 45 metre line, later on Kielt swung his trusted left peg to level the game.

Greenlough had three players black-carded over the hour