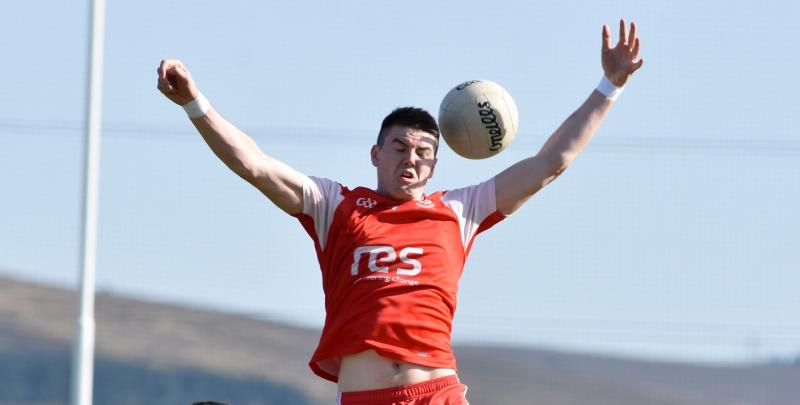 A second-half goal from Tiarnán McHugh gave Drumsurn the extra boost to see off Glenullin in slippery conditions on Saturday evening.

Drumsurn 2-15
Glenullin 0-16
McHugh finished with 1-7 from play, won kick-outs and was a constant link when Drumsurn used their kicking game.

Eoin Bradley and Dermot O'Kane kicked two thirds of the visitors' scores. They hit points either side of a Traglach Bradley effort to cut the margin to 1-11 to 0-11 after 44 minutes. O'Kane's free came after what appeared to be a trip from McHugh which could've resulted in a black card.

In the next attack, Dara Rafferty powered through the Glenullin defence before playing the ball to McHugh who kicked the ball to the bottom corner of the net to cap off a sensational display.

Glenullin, who lost inside forward Fearghal Close to a first-half ankle injury, battled back to a three-point margin, but for the rest of the game Drumsurn were always able to keep the scoreboard ticking over and unless they conceded a goal, which the 'Glen never looked like getting, they always looked like coming through.

In the absence of Aaron Butcher, Dara Rafferty lined out at full-back, with Cahir Mullan providing the cover in front of his marking job on Eoin Bradley.

Drumsurn were three points ahead at the first water break, 0-5 to 0-2 and extended their lead with points from the majestic McHugh and Cahir Mullan before they grabbed their first goal in the 22nd minute. A direct ball to Ciaran Mullan was won first time and the impressive Shea Murray's support run was timed to perfection, taking possession before slotting to the net.

The home side were 1-9 to 0-7 ahead at the break, but it was Glenullin who were back in the game before McHugh's goal.

Drumsurn goalkeeper Harbinson played a central role in Drumsurn's win during the final quarter. When Glenullin nicked back a point, his brave kicking in the wet conditions always found a red jersey and helped them take the sting out of the game.