Kilrea built up a 10-point lead by half-time 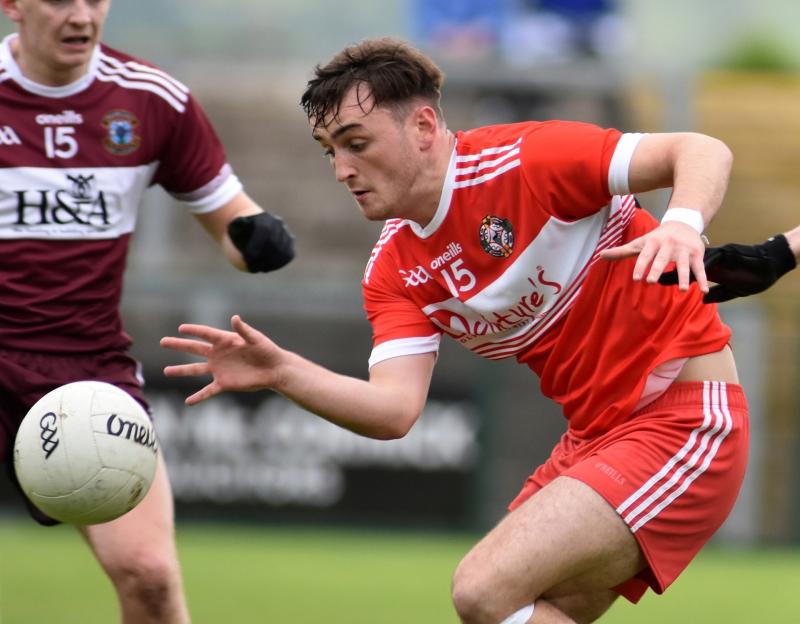 A strong first-half performance helped Kilrea into a 10-point interval lead and on their way to victory at home to previously unbeaten Drumsurn.

A strong first-half performance helped Kilrea into a 10-point interval lead and on their way to victory at home to previously unbeaten Drumsurn.
It was a half where Sean Brady's side only registered two points. Kilrea's work rate, tackling and blocking set the foundations for the victory.
Paddy Quigg registered the first point of the game in the opening seconds. A Niall Johnston free and a great solo effort from Odhran McLarnon increased Kilrea's lead.
Quigg got his second of the game, curling over from wide on the right and just before the first half water break James Kielt floated a free over from the sideline.
In the 19th minute, Kilrea hit the game's first goal. Paddy Quigg raced along the end line before fisting across to PJ McAleese, who sidestepped the keeper to drill the ball to the roof of the net.
From the kick-out Charlie Kielt broke the ball to Daithi McLaughlin, who fed the on-running James Kielt and he fired a rocket into the top corner.
Despite Drumsurn's best efforts, Kilrea's young lads were running riot. Peadar McLaughlin hit Kilrea's final point of the half with a beauty off the outside of his right foot from the left hand side for a 2-6 to 0-2 lead
The second half began with the ball in the back of the Drumsurn net after 25 seconds. PJ McAleese collected the ball and fed Odhran McLarnon who skipped past his man and drove the ball to the top corner. Drumsurn hit the next two points, from Harry Foster and Shea Murray before they grabbed a goal, a pile-driver from Tiarnán McHugh to the corner of the net after a pass from Barry Harkin. McHugh nearly added a second goal, but was denied by Peter McKinney.
Kilrea settled with points from PJ McAleese and James Gillen, they took the sting out of the game for a comfortable win.