A roundup of last weekend's action 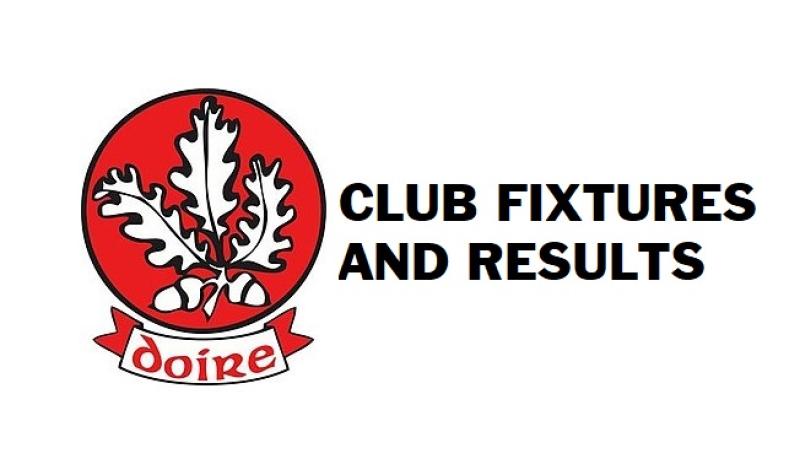 In a highly competitive clash between two of the stronger teams in the division, a much changed Desertmartin team came from six points down after 20 minutes to push Ballerin to the limit.

A few debatable umpiring decisions kept the pot boiling in an exciting contest.

With Mark Ferris driving forward from wing back, Ballerin played some delightful football to go 0-7 to 0-1 up after the first water break.

With Declan Murray picking off some great long range scores, the St. Martin’s were just two adrift at half time 0-7 to 0-5.

In a very even second half the home team had reduced the Ballerin lead to a point. The winners then indulged in keep ball in the last five minutes to make it six wins from seven.

Limavady 1-16
Ardmore 0-8
Even with a much changed team Limavady Wolfhounds had their expected win over Ardmore at McCourt’s on Friday evening.

While the St. Mary’s competed for every ball their lack of scoring ability in attack once again proved too big a handicap.

The Wolfhounds, including subs gave nine fringe players a piece of the action.

Once again the St. Mary’s were largely dependent on experienced full forward William McLaughlin for scores.

point success over a Dolan’s team that is finding it hard to finish their approach work. Both teams

doubled their scoring in the second half after the Henry Joys led by 0-6 to 0-3 at the interval.

Drum improved after the break. In the absence of the regular keeper Conan Doherty manager Eoghan

Carlin donned the boots after a three year break and wore the number one jersey.

a tight second half Deeney’s goal put a bit of daylight between the teams.

Dungiven 2-19
Magilligan 1-12
The Dungiven men had this game well in hand at half time as they followed up their big in over Drum with a 2-10 to 1-4 lead against a depleted Magilligan team.

It was an even enough second half, but Magilligan, badly hit by injury left themselves with too much to do after being overwhelmed in the opening period.

Come championship time, Magilligan are confident that they will have all four of their injured troops ready for action.

Glack given a scare by Doire Colmcille