An impressive showing from the Oakleafers isn't enough 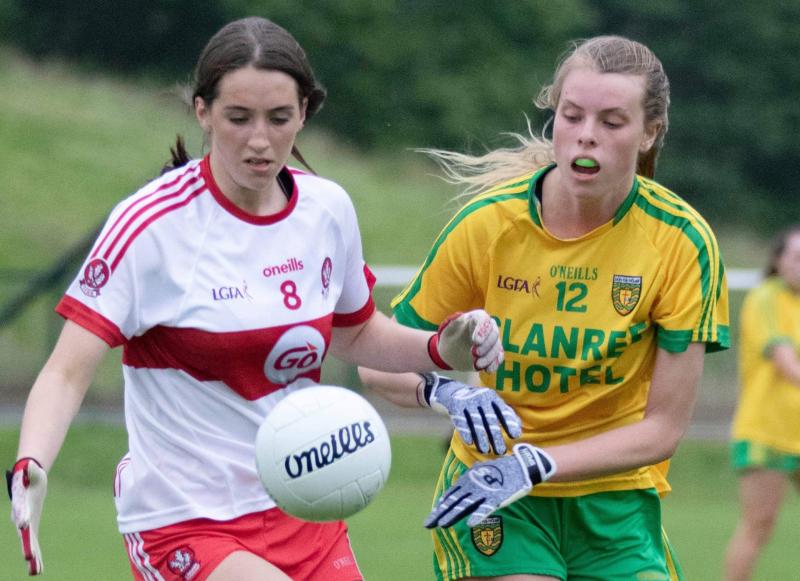 An impressive Derry were undone by two first half Donegal goals and a stout second half defence by the home side in this enthralling Ulster Championship first round battle in Glenfin on Wednesday evening.

It was Derry who opened the scoring in the first minute, but Donegal went 0-3 to 0-1 ahead through a free from Doherty and two lovely points from Brenda Carr and Shauna Higgins.

Derry’s Clodagh Moore responded with an equally well-taken point, before Doherty was set on her way to score a great goal to the top right corner of the net after great work by Shannon Leech and midfielders Catherine Campbell and Orla Keon.

Donegal had a number of wides (six in all in the first half) and they were left rueing those missed opportunities when Derry hit back through a goal, scoring from a rebound after a save by Donegal goalkeeper Orla Corry.

Brenda Carr, Shauna Higgins, Doherty again and St Naul’s Catherine Campbell (with a wonder point from distance) had Donegal leading 2-8 to 1-5 at the break when they should have been much further ahead.

Derry threw everything they had at Donegal in the second half, hitting five points with the home side managing just two, through Higgins and Carr.

Donegal hit too many wides in the second half too, but the real story of the final quarter was the Donegal defence. Ellen Canavan, Nadine Gallagher and Aoibha McDaid were outstanding alongside the player of the match, St Naul’s Caoilfhinn Deely who mopped up wave after wave of Derry attacks.

As Donegal tired, sub Caoimhe Cunningham was superb in helping to keep the ball in the Derry half, preventing the visitors from carrying out further attacks.

The game was a superb advertisement for Minor county ladies football in Ulster; with Derry showing huge improvements again, and taking almost all their opportunities at points.