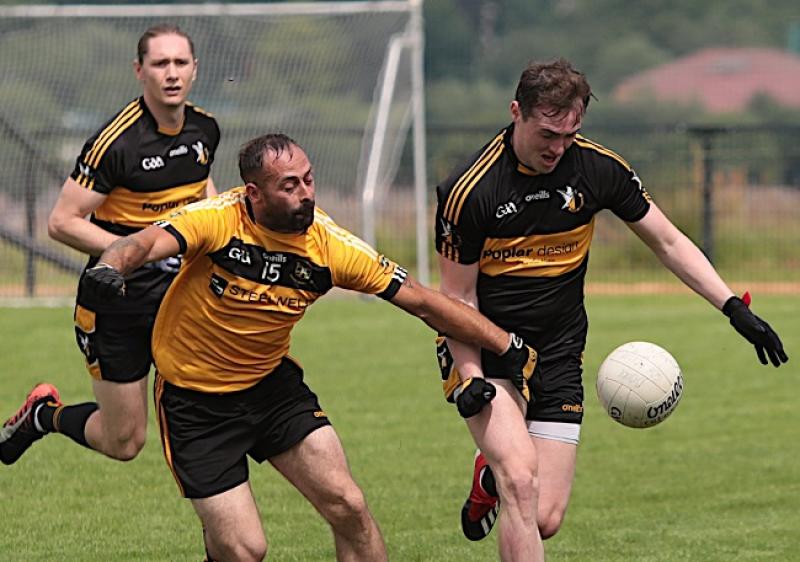 Doire Colmcille’s wait for their first win of the season continues as they paid the price for a dominant opening spell that yielded nowhere near the deserved number of points.

It has been a stop start season for Colmcille so far, but they finally got their first home game of the season under their belts, after two failed attempts in recent weeks.

Manager James McQuillan had a job picking up his players after last week’ demoralising defeat in Limavady, with the prospect of facing a struggling Moneymore side on their own patch much more palatable than an away trip against a high-scoring table topper like the Wolfhounds.

Between them, both teams had only managed three points in nine league games before this one, but this was a real opportunity to put a win on the board and climb away from Drum at the foot of the table.

But Colmcille almost defeated themselves in this one due to their inability to make the correct decisions at the right moments in front of the posts, which was in stark contrast to their opponents who barely passed an opportunity by. It was those first 10 minutes in particular which really cost the home side a potential victory.

Back on their home patch, and determined to take the game to Moneymore, Doire Colmcille were dominant in the opening stages and should have registered a number of scores. They have thrice the chances that their opponents had, and the fact that they trailed Moneymore by five points 15 minutes in tells its own story.

Mickey McCallion, whose left foot kept his team’s hopes alive throughout the game, gave Colmcille the lead with an early free and the home side were off and running. Good possession and approach play only encouraged the home side who had Moneymore on the back foot again and again in a strong opening spell.

Moneymore however, delivered an early devastating blow when they scored their only goal with their very first attack on eight minutes. A sublime passing move involving Callan Bloomer, Daniel Jackson, Emmett Crozier and Tiernan O'Neill ripped Colmcille to pieces and it was O'Neill who palmed the ball into the net after unselfish work from Crozier to give Moneymore a lead which they never surrendered.

Pearse O’Neill should have replied immediately and emphatically for Colmcille as he drive right through the Moneymore defence at the other end, but as he closed in on goal he got his finish all wrong, and sliced his shot horribly wide much to his frustration.

Another goal chance quickly followed and it came to David Quigley, who collected the ball on the right and ran straight for goal, but his ambitious attempt to find the net from the angle was thwarted by a save from Ronan McKee, who also just managed to take the ball away from Dee Watson, who was closing in for a tap in. On both occasions, a point was there for the taking, but Colmcille came out of that dominant spell with zero points and zero goals, and in fact a return of 0-1 as Daniel Jackson pointed in between times.

Stephen McGurk sent one straight down the middle for Moneymore and by the time of the first water break, Colmcille somehow found themselves 1-2 to 0-1 behind, with three wides and two missed goal opportunities to look back on. The game could well have turned out so differently had they been more clinical when it really mattered.

Moneymore began pulling away after that and Colmcille’s frustrations began to creep in. A free from Bloomer extended the lead before Harry Curran missed an easy free for Colmcille, McQuillan not quite believing his side’s inability to finish as the ball struck the outside of the post.

After that McCallion took over free kick taking duties and he scored Colmcille’s second point of the game on 19 minutes.

Moneymore were swift and clinical when they needed to be and Tiernan O'Neill’s pace earned him a score before another Bloomer free took the score to 1-5 to 0-2 with the half coming to a close.

Watson, frustrated by a harsh booking earlier in the game, gave his team some encouragement with the final kick of the first half, a typical driving run matched with a proper finish, which was most certainly not the case for Colmcille throughout a disappointing first period.

Another free from Bloomer and a score from substitute Philip McDonald extended Moneymore’s lead, while Colmcille’s wide tally crept up to 9 as they tried in vain to get back into the game.

After Tiernan Hutton parried Chris Marshall’s goal-bound effort over the bar, Colmcille scored two frees in quick succession through McCallion and Campbell in the home team’s best spell in the game since the opening 10 minutes, with the score reduced to five points at 0-6, 1-8.

That was as close as Colmcille got however, as Moneymore, helped by the nonstop run of Chris Marshall from deep, did enough to stay comfortable.

Bloomer and McCallion traded scores and the game entered the final 10 minutes with McQuillan’s players needing a goal that they hadn’t threatened since very early in the game.

To their credit, Colmcille pushed and pushed and they got their chance – a great driving run by Campbell set up McCallion but just as he pulled the trigger, McDonald arrived with a brave and brilliant block to turn the shot away from goal. Within seconds Ciaran Curran had fisted the ball onto the bar for Colmcille who knew by then that it wasn’t going to be their day.

Those opening 10 minutes ultimately decided this one.