Cruise control - The story of Derry's win over Offaly

Gareth McKinless has been a invaluable addition to Rory Gallagher's options 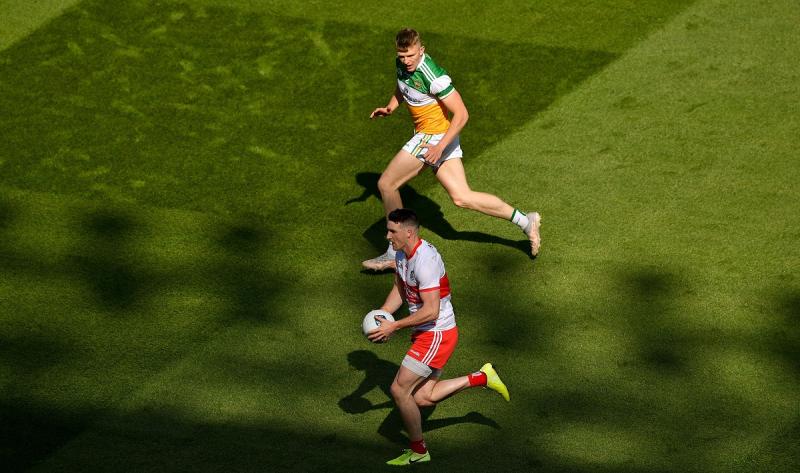 Derry cruised to a 12-point victory on Saturday to cap off their league campaign with silverware at headquarters and a 100 percent record, but on another day this could've been a total whitewash.
A glance at Division 3 on paper, and Derry's northern section in particular, looked imposing from the outset. The Ulster and Munster champions, with Fermanagh and gritty Longford added for good measure.
Three factors have led to Derry's downfall and a mentality among many that Divison Three North was a group of death.
Owenbeg's revolving door, Slaughtneil's All-Ireland club campaigns fusing into the county season and a shattered self-belief. Add in Derry's failure to take more than one point from Down and Leitrim at the start of 2020.
Fast forward to 2021 and four words have defined Derry under Rory Gallagher – commit to each other. There isn't an interview that doesn't reference a need for the players to follow those four words. If it's the dressing room mantra, it's a powerful one.
After blowing Longford and Fermanagh to smithereens, Derry refused to wilt against Cavan before using third gear to steer their way past Limerick and onto an unexpected detour to their Offaly date at Croke Park.
Two things irked Gallagher after their four-point win over Limerick. His side's inability to shut down Limerick's short kick-out strategy and passing up two goal chances in the first half. The two barriers stopping Derry pulling up a seat at Ulster's top table.
Saturday's third quarter pointed at a job half done in that regard. Of Peter Dunican's seven kick-outs, Derry closed the gaps with everyone pushing up. When Dunican landed the ball long, Derry battered it back towards the Davin End. Twice Conor Glass got hands on it, with Emmett Bradley doing likewise.

On the other side of the positive were four Derry wides in that same spell. They had the ammunition to shoot Offaly out of sight, but didn't and it won't cut the mustard in the Ulster championship.
Shane McGuigan has shot the lights out all season, but could get no change out of Eoin Rigney and didn't register a score from play until the 60th minute after being crowded out.
While McGuigan's weakly struck penalty summed up his frustrated evening, he still kicked seven points – including 'that' sideline. Also, the attention gravitating to him took away from John Maughan's chances of capping all of Derry's prize ponies into a corner. It allowed Gareth McKinless to shine.
With the avenue closed to McGuigan, McFaul's kicking game and the duo's telepathic link was closed down. Of Derry's 21 points, only Emmett Bradley's early ball for Jack Doherty's late score was a kicked assist. The rest were fisted to a player who peeled into space, or Derry's barraging runs. Eight frees won from running at Offaly's defence was a useful return.
This is what McKinless brings and when Offaly put their damage limitation plan around the Loughlin, Heron, McGuigan triangle, the Ballinderry man tore them asunder in the middle channel.
It was like the Fermanagh game at Owenbeg on repeat.
He was simply scary, as his neon yellow boots danced towards Hill 16. If Jack McCaffrey did likewise, they'd be raving it about it everywhere. It would have a full stadium buzzing.
That's one part of the double act that has defined Derry's season. The presence of Conor Glass is the other. He chipped in with five points across the league, but the defensive solidity he has brought is invaluable.
Saturday was the perfect example. He forced turnovers and owned the spot between midfield and the edge of the Derry full-back line. His early years of playing at full-back on the underage teams above his year planted a natural defensive positional sense. It was the same in Derry minors' Ulster winning year of 2015. It was the same in Australia. An engrained instinct to mind the house.
Combined with a turbocharged McKinless, it gave Derry an almighty platform on Saturday. Offaly never stood a chance.
What didn't help their cause was not pressing the Derry kick-out. It allowed Odhran Lynch to pick out anyone he wanted and his variation left a non committal Offaly chasing Padraig Cassidy, Conor and Ethan Doherty, who forced Offaly into the fouls when Derry got a head of steam up.
The one time Offaly forced Lynch to kick it into the minefield in the first-half, Shane Horan hoovered up the ball and seconds later Eoin Carroll palmed the ball to the net.
What will disappoint Derry will be how they were caught out of position after Benny Heron fouled at midfield. There was enough time to get their defence in place. But, as soon as the referee brandished yellow to Heron, Peter Cunningham grabbed the ball and sprayed an instant diagonal pass and Derry were open.
It didn't matter on Saturday, but when putting it in the context of the amount of goal chances squandered at the other end, it all points to three weeks of polishing off those areas.
Against Down or Donegal in the white heat of championship, it might be just the one goal chance which presents itself. The pleasing thing is that Derry now have a balance to their game that creates openings. The McFaul pass to unlock a defence and the running game through the middle.

Rogers 'will be back' for the championship

Of the five goal chances on Saturday, McGuigan's penalty and Jack Doherty blazing over seconds earlier were the only truly clear-cut ones.
The rest were down to decision making and the fine margins. The 'goal' McGuigan had disallowed, the pass just needed to be marginally further further forward, so he didn't have to check his run. Even in the build-up, Derry weren't expecting the turnover and didn't have enough runners ahead of the ball.
When Ethan Doherty got blocked, which led to Glass' fisted effort, it was more of a half chance. A point was a better option to keep the scoreboard ticking.
McGuigan's first-half shot still had to beat two defenders before it got to the length of the goalkeeper. For the first two chances, from McKinless and Ethan Doherty runs, Niall Loughlin was placed for the goal. But that delay in execution closes the door.
Saturday was bonus territory and with no fresh injuries it leaves Derry perfectly poised going into the championship. Unbeaten, but still with room for improvement and Division Two to embrace on the other side of Christmas.

MAN OF THE MATCH
Gareth McKinless – Derry had a number of steady performers across the pitch and a tally of 11 different scorers points to the controlled performance. But with Offaly ruling out a kicking game into the Derry attack, it was the runs of McKinless that energised Rory Gallagher's side, safe in the knowledge that Conor Glass would drop back and close the door behind him.
TURNING POINT
Bradley score – This game didn't need a turning point, such was the gulf in class. But when Offaly found the net in first-half stoppage time, Derry's response was instant. Odhran Lynch found Conor Doherty with his kick-out and after link play from McGuigan, Emmett Bradley fired over a sweet score to leave Derry going in at the break on a positive.
SCORE OF THE GAME
McGuigan sideline – Conor Glass forced Offaly into an error and the concession of a sideline ball. With the angle not favouring him, McGuigan wrapped his trusted left boot around the ball and curled it onto the roof of the net. It was perfection.