Gallagher wants McGuigan to become among the top forwards in Ireland

Padraig Cassidy expected back in training on Tuesday night 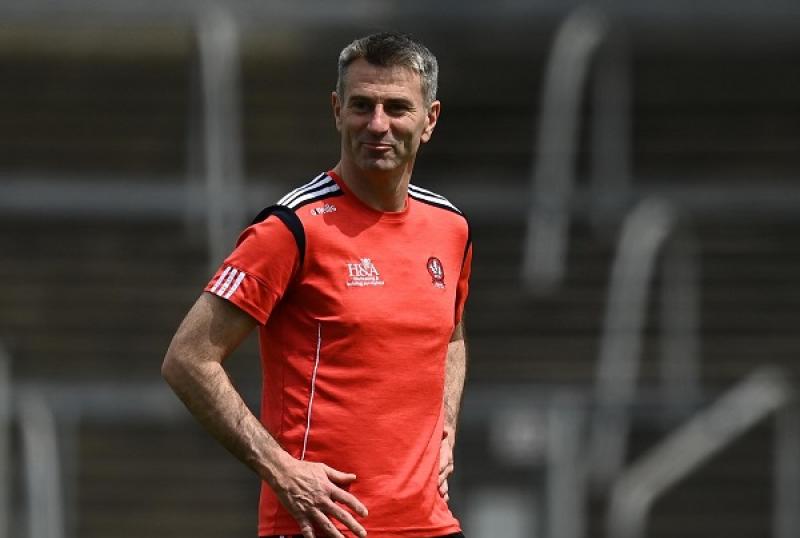 Derry manager Rory Gallagher praised attacking duo Shane McGuigan and Niall Loughlin after their gunning of Cavan's defence in Saturday's victory.
McGuigan hit eight points in a Man of the Match performance, with Loughlin ramming home Derry's goal during the first-half of a pulsating encounter.
Gallagher, himself an ace forward with Fermanagh in his playing days, heaped praise on the duo who he said were a pleasure to work with.
When asked about McGuigan's contribution to Saturday's victory, an upbeat Derry boss joked that the management rated him 'good enough' to get a starting berth against Limerick.
Behind the joke, was a glimmer at the focus in the Derry camp. There is always room for more. Even with their crown jewels.
“He won't be getting carried away, he knows I have exceptionally high expectations of him,” Gallagher said of McGuigan.
In 29 senior appearances, including six as a substitute, the Slaughtneil ace has scored 11-100 in total, of which 9-57 came from play.
“We do a lot of work on how to make him better, he is unbelievably responsive, and he is a joy to work with. I feel we'll never settle for him being a really good player, he has the potential to be up there with all the top players in the country and it is a challenge for him.”
In recent times, McGuigan has worked on his right foot to give him another option to his preferred left peg. Gallagher revealed that the improvement comes from more than his other foot.
“I don't work on weak feet, I work on weak sides,” Gallagher promptly stated. “I think he has to be more dangerous, like all the players. The best players in the country are two sided and have to be a threat on both sides and I think Shane has developed that massively.”
The Derry manager commented on the 'really good' movement off the ball from McGuigan and Niall Loughlin.
“Niall's goal was phenomenal from a very tight position,” Gallagher added. “We are trying to work around the two of them and their strengths...it is working well.
“Anybody can turn up early (at training) and take free kicks, but when you have real concentrated work at being better from an individual, that is very pleasing.”
Derry's starting team on Saturday had one change in personnel from their opening two wins, with Paul McNeill replacing Padraig Cassidy who, while present in Cavan, wasn't togged out on the match day panel.
A 'head-cold' kept Cassidy out of the game and that otherwise he was '100 percent'.
“He is a machine,” Gallagher added. “He is over his injury, we just felt he was heavy all week with a chest and a head. It was better to leave him out when he wasn't fully fit and we were able to get Paul in.”
Gallagher expects 'Tad' to be back training tonight (Tuesday) and stated that Conor McCluskey is back to 'full training, with Karl McKaigue – who hasn't played for Derry since the 2019 Qualifier defeat to Laois – listed on the bench on Saturday.