Council appeal for people to come forward with their memories 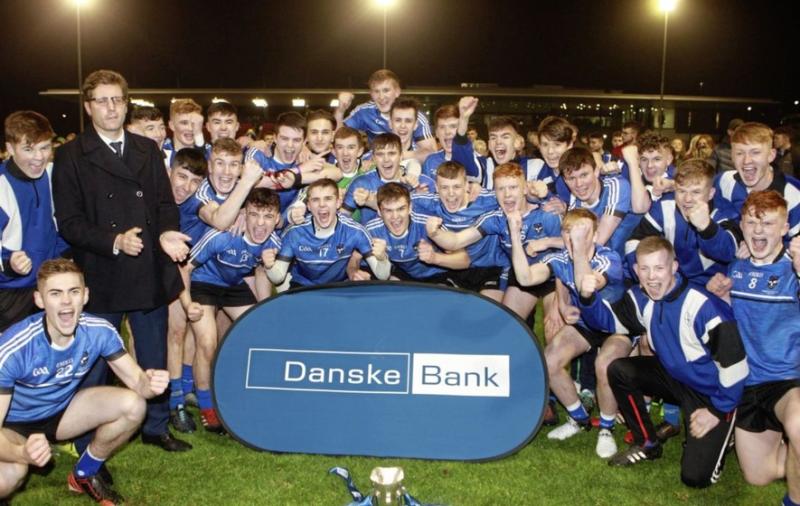 Ulster Schools’ GAA Council is intending to publish a history of the Mageean Cup to mark the 60th anniversary of the competition in a couple of years’ time.

The cup was presented to Ulster Colleges in 1963 by the staff and students of Dromantine College, Newry in memory of Most Reverend Daniel Mageean, Bishop of Down and Connor (1929 – 1962) and St MacNissi’s Garron Tower were the first winners.

Council Treasurer Sean McGourty says the decision to research and publish a history is a direct response to the enthusiasm that greeted the publication of the story of the MacRory Cup in 2014.

“We got tremendous feedback from the publication of 'The MacRory Cup' seven years ago. We sold 4,000 copies quite quickly and the book was very well received not only by our schools but indeed by the general GAA public.

“Now we feel the time is right to mark 60 years of the Danske Bank Mageean Cup with a similar type of enterprise,” said McGourty who coached his own school De La Salle College in Belfast to two finals a couple of decades ago.

McGourty goes on to say that, despite its relative youth, researching the Mageean Cup history could be a lot more problematic in comparison to the MacRory Cup competition which is just a few years short of its centenary.

“There was a huge amount of research undertaken long before the author JA Walshe sat down to write the MacRory Cup book. But for the most part there was documentation available in the form of match reports and photographs in the winning schools.

“It is fair to say that during that period the Ulster Schools’ Council allowed the hurling schools to organise games between themselves and only got involved when medals were needed.

“Hurling was played at that age level in fewer schools and often there was no actual Mageean Cup final. Often in the 1960s and 1970s there was a mini league which St Mary’s CBGS Belfast won easily.

“So with no final and often one-sided games played on a week-day there would have been little coverage in the local or regional press and that would have been reflected in the schools themselves. There are many winning teams that were never photographed at all.”

During the 1980s the competition expanded with Armagh CBS, St Patrick’s Maghera and St Louis Ballymena all winning their first titles and with that expansion came a more organised approach to the staging of Mageean Cup finals.

The MacRory Cup and other football competitions evolved out of the need to keep boarders in the diocesan seminaries occupied over weekends. It quickly gained a prestige and the winning team was photographed in school with the trophy soon after the final.

Hurling on the other hand tended to be played in day-schools run by the Christian Brothers encouraged by men from hurling counties through Munster and south Leinster. In the 1930s for example Abbey CBS represented Down in inter-county hurling at minor level, winning a couple of provincial titles and appearing in All-Ireland semi-finals.

However few of these Christian Brothers’ schools extended to Sixth Form and therefore they could not compete at senior level. Hence there were hardly any schools in rural Ulster able to play for the Mageean Cup.

St MacNissi’s College Garron Tower was opened in 1951 mainly to cope with the overflow from St Malachy’s College, the diocesan seminary. The day pupils there played mainly hurling while the boarders competed in football. Indeed the school won the 1964 Rannafast Cup in between lifting the first two Mageean Cup titles.

The two other schools in north Antrim, Cross and Passion Ballycastle and St Louis Ballymena, started life as girls’ schools and only began admitting boys around the time that the Mageean Cup was getting up and running.

Ballycastle’s first win didn’t come until 1977-78 and, like St MacNissi’s, they also completed back-to-back titles with Brian Donnelly and Olcan McFetridge in the team. However it took the school another 15 years before a third title arrived, while St Louis Ballymena’s only win before 2015 came in the 1988-89 season.

The competition was dominated by St Mary’s CBGS Belfast who collected 16 of the first 20 titles and it wasn’t until the emergence of St Patrick’s Maghera in the early 1980s that the Glen Road school was really challenged on an annual basis.

Currently the Mageean Cup is enjoying its most competitive phase with five different winners during the last five seasons.

The Ulster Schools’ Council is keen to hear from players who participated in the Mageean Cup, to record their memories of the competition, of the finals and how the team was prepared in individual schools. They would also be very interested in photographs of winning teams, indeed any photographs of games during the first three decades.

If anyone can provide assistance they should contact seamasmac@sky.com.