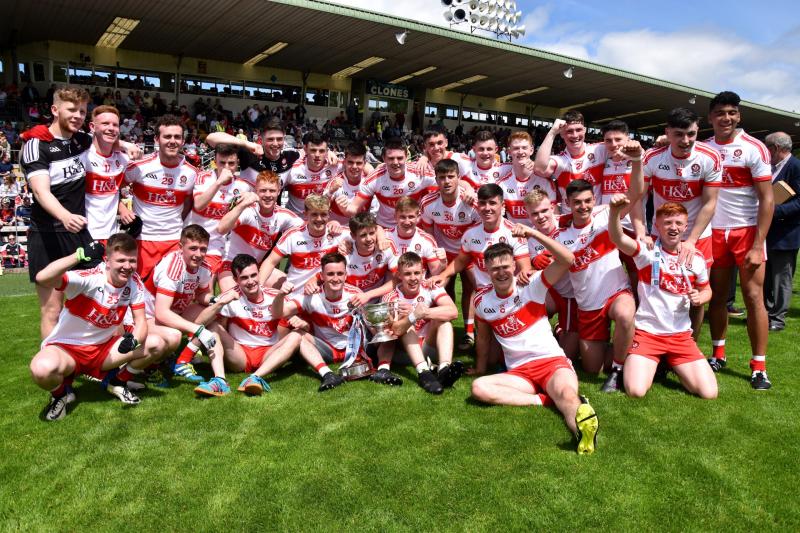 Derry Chairman Stephen Barker appointed a committee, under Damian Cassidy, to look at coaching across Ireland, with the view to adopting a model that would suit Derry.

After weekly interval zoom meetings and feedback from leading figures in Dublin and Kerry, the committee came up with six areas they felt the county need to prioritise.

The proposal – which was released to the County Derry Post - was submitted the Derry GAA, before being disseminated to all clubs. As a follow-up, the committee met with clubs last week, at three separate meetings, and the final discussions will shape the final plan.

The committee's vision was to create and manage a 'Derry GAA learning environment'.

Their mission statement was to - reflect the GAA’s unique ethos within our community through a sustainable support system which promotes the highest coaching and performance standards, leading to increased participation at both club and county level.

It identified the following strategic goals:

• Continuous development of our coaches.

• Supplementary pathways for development of our referees.

• Implementation of the Derry City Strategy

In terms of the plan's implementation, an Implementation Committee will be setup, which reports to the Games and Development Committee. The committee will draw up plans, annual goals and targets, as well as 'ongoing monitoring' against targets and 'regular' reporting to Derry GAA and the clubs of the county.

The six areas identified for the plan are outlined below.

The committee proposes to:

• Carry out a ‘Coaching Review’ with each club to identify areas for further development.

• Employ a Games Promotion Officer (GPO)/Coach Developer (CD), in a dual role, for each club and its feeder primary schools. Funding for the post will be shared between club and county, enabling free uptake for primary schools to avail of a year-long

• Identify the CD as the link between club and county and the primary source of learning and support for club coaches.

• Introduce a coaching model that will add breadth and depth to player and coach development.

• Promote a games-based coaching approach as the primary method of player development in both club and county.

• Promote individual coaching as a core element to be practised at club and county levels, through a variety of coaching styles.

which guarantee meaningful involvement for all players. Establish an agreed template and increase awareness among coaches, parents and young players of how to develop a culture of providing for all. 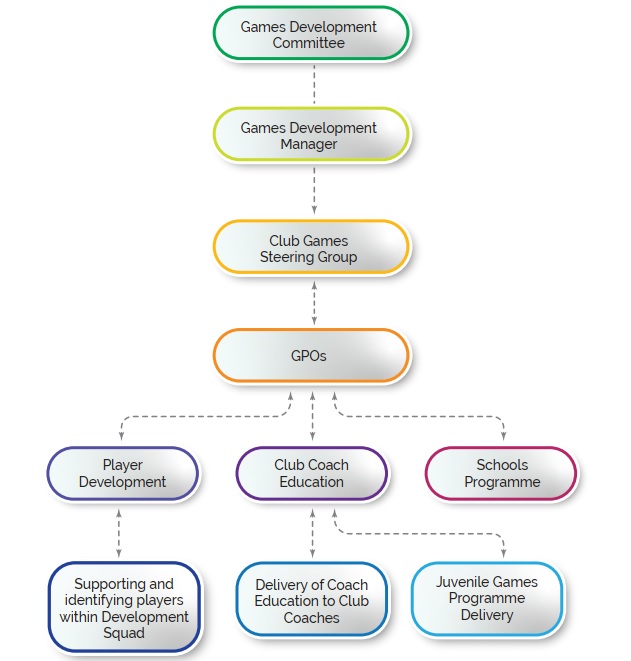 The structure of coaching within clubs

2 Junior and Intermediate Player Development
In a bid to raise the standard of club football and help more players form a pathway to county level. The committee have proposed that:

• The senior championship to be expanded to include junior and intermediate players in four ‘District Teams’ to improve player and club standards.

format of four groups of five teams, taking the total to 20 teams.

• A separate District championship will be played.

• The adult leagues will be standalone competitions that will not be linked to any of the senior, intermediate or junior championships.

• The U17, U18.5 and U20 competitions will consist of a minimum of 10 league games and championship.

• Increase the competitiveness of junior and intermediate teams.

• Provide the structures to enable junior and intermediate players to aspire to county teams.

• Create regional teams to increase competitiveness of all clubs. 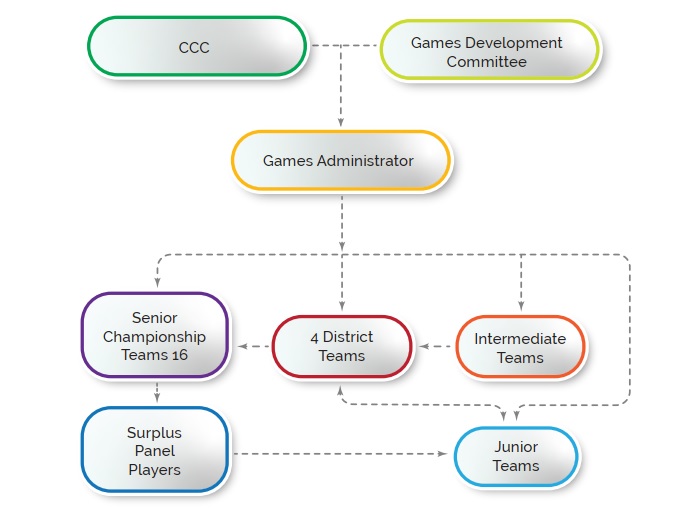 How the district teams fit in

After looking at the current development squad structure, the committee have proposed to:

• Develop the player pathway structures from U15 through to county senior level. Produce athletically strong players who can kick with both feet, have problem solving-skills and are good decision makers.

• Develop squad selection and deselection processes, which will involve full-time games development staff, school and club coaches. Provision for Relative Age Effect will be taken into consideration. Players who do not make initial squads will have further opportunities that season.

• Expand the athletic development programme to up-skill club volunteers to assist with delivery and support across each club in the county.

• Develop a pathway for coaches to be involved within squads and supported by Derry GAA through small incentives and in their own personal development.

• Introduce a coaching model that will add breadth and depth to player and coach development.

• Promote a games-based coaching approach as the primary method of player development in both club and county.

• Create a high performance team culture with the values/behaviours and accountability necessary to support this.

• In conjunction with senior team management and the county high performance team, create an environment where a select number of players can thrive before entering senior county squads.

• Ensure all players involved with Derry at every level of the pathway have a comprehensive database of key information recorded and stored. This information is shared with the individual.

The committee have also looked into the school structure, with an in-depth analysis of Dublin's programme. The focus will mainly be on primary schools, while Derry City will have added support for second and third level. Here are the committee's proposals.

• Encourage all primary school children to participate in Gaelic games through a structured programme, delivered by the club GPOs.

• The development of Gaelic games skills and the health and well-being of all children will be central in all activities and links to the local clubs will be developed.

• Encourage each school to become a GAA 5 Star Centre, through participating in a range of Gaelic activities for 60 minutes of the school week. 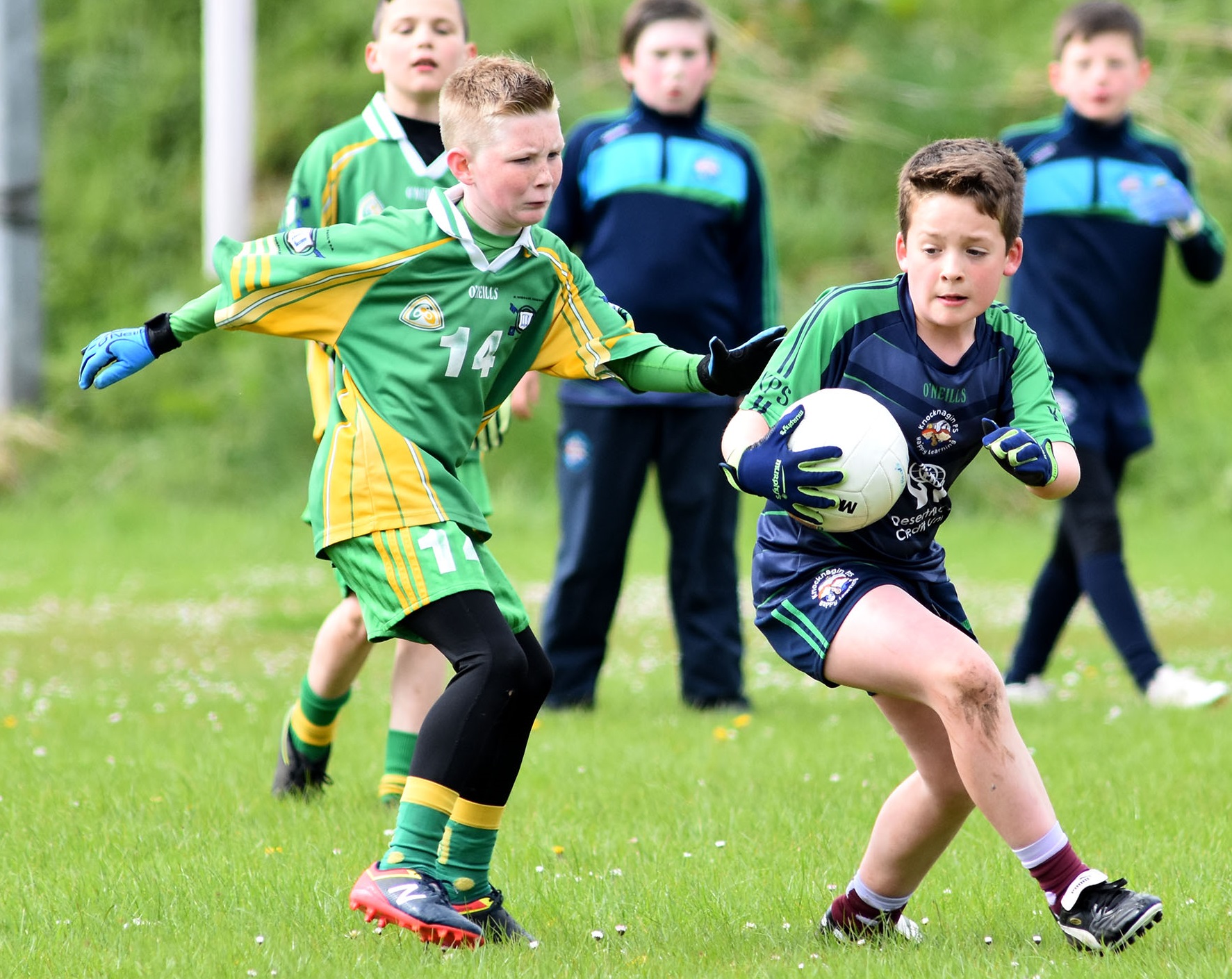 5 Go Games and Participation
The committee set out to examine the Go Games concept, with particular emphasis on involvement, enjoyment and retention. They propose to:

• Increase “Go Games” participation, football and hurling should to be played on alternate weeks/weekends up to the end of October.

• Run centrally-based Go Games blitzes, of which there will be at least two organised each year, will be on a one-year age band basis. The blitzes will be based on classes P3, P4, P5, P6 and P7.

• Have club hosted Go Games will be based on a two-year age band with class groupings P2/P3(U7.5) and P4/P5

• Introduce a “silent sidelines, player talk only” rule for Go Games in 2021 and review its operation and impact at the end of the season with a view to extending it to older age groups.

• Set up a “Young Referees” academy to recruit and train a group of 15/16 year olds to referee Go Games specifically.

• Organise U13 on a league basis only, with no championship. Games will be 13-a-side and have two-touch.

• Introduce other rules at U13 level, for portions of games, to help develop players with all-round skills, for example - promote play on left and right sides

• Increase fun, enjoyment and involvement of all participants.

• Bring in systems to improve skills and understanding of the game.

• Develop a conducive environment for player and referee development.

Whilst this review makes some suggestions around equipment and facilities, the primary areas for consideration focus on support staff appointments, roles, accountability, culture, schedules, communication and liaison.
Here are the committee's proposals.

• Protocol for recruitment, advice on terms of appointments and roles and responsibilities for applicants.

• Create a High Performance Team Culture with the values/behaviours and accountability necessary to support this.

ALSO - Interview with Damian Cassidy, outlining the key points of the plan....