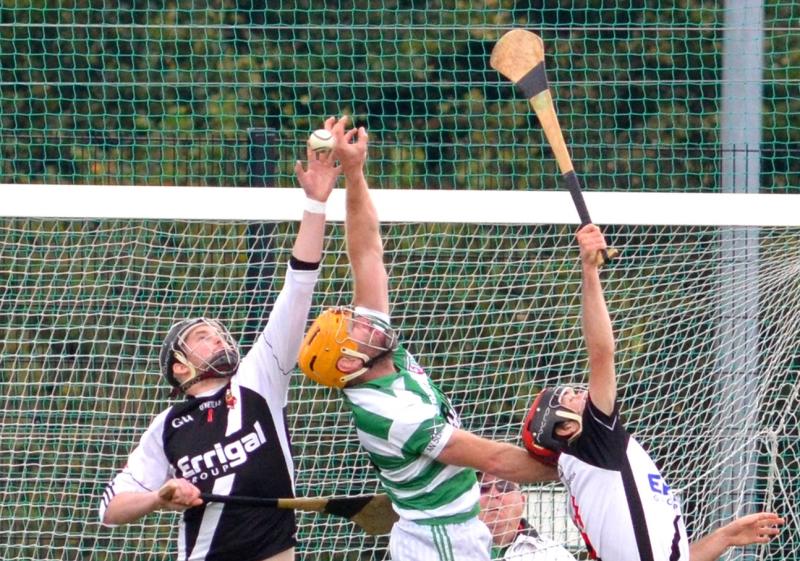 Goalmouth action from the 2014 clash of the teams (Pic: Mary K Burke)

After two years beating Slaughtneil's door in search of the Fr Collins Cup, Kevin Lynch's are once again back looking to regain the title they last won in 2011.

Back then, three Kevin Hinphey goals helped them to a 5-11 to 1-7 win over Lavey, 12 months after the Erin's Own men beat them in the final to end their five-in-a-row hopes.

In recent seasons, Hinphey has helped bring through a batch of underage that is feeding into the senior ranks.

Former sharpshooter Geoffrey McGonigle is back for a third season as senior boss. Ronan McCloskey remains on the management team, where they are joined by Ryan O'Neill who has coached Derry U17s to back to back Celtic Challenge titles.

“We are the same as every other team, we had a pre-season done the that was kicked into touch, so you were basically starting from scratch,” O'Neill pointed out.

From last season, they have lost Corey O'Reilly who has moved to Canada, but many of their young guns are a year older.

Padraig O'Kane scored a goal in last year's win over Ballinascreen after being sprung from the bench. Sean and Conor Kelly join their older brother Paddy in the side.

“There are a few boys pushing and (Eoghan) Cassidy has got himself cemented into the team after his first year last year. The county scene will have helped him and you have Darragh McGilligan coming in off the back of the Celtic Challenge and trying to push on,” O'Neill added.

The Lynch's are assessing Mark Craig's Osteitis pubis injury, which has shown 'a bit of progress' in recent weeks.

There is also a doubt over Liam Óg Hinphey, who would bring a wealth of experience to their defence, especially if Craig fails to make it for the opening games.

“We are putting no pressure on anybody,” O'Neill added, while acknowledging the uncertainly surrounding the Covid-19 pandemic.

Aiming their sights at Slaughtneil is for another day. For now it is about getting it back to a final.

“It is like every year and all we can do is prepare for that first game against Swatragh and once that it out of the way, we will start pushing on for what we are looking for,” O'Neill stressed.

“Ideally, the goal will be to be in the county final and challenging whoever comes through the other side of the draw and I would be 99.99 percent sure it will be Slaughtneil.”

For now, it is about finding a balance. Mark Craig is no longer part of Stephen O'Neill's football panel and will be able to focus on his recovery.

“It is a tight schedule for dual players and we have just been reasonable with them. If a man has trained or played a match, we need to ensure they rest,” Ryan O'Neill points out.

“We just can't send men to the slaughter. Our footballers will be doing their thing and we will be doing ours, it just about being sensible with the lads.”

Swatragh are under the management of Declan McGuckin this season, after Eamonn Hasson stepped down to work commitments and has brought Seamus Bradley with him to the management team.

The 2012 champions have not reported any retirements since last season, but could be without regular full-back Malachaí Ó hAgáin due to family commitments.

“With the times that is in it, you can't be too forceful. He will be a massive loss, but thankfully Patrick Turner is back out again,” McGuckin pointed out.

“Going by a lot of clubs, numbers are away back up again. We have 32 to 33, so things are very good so far. It's unbelievable what a pandemic can do to people and they realise it is good to get playing sport a day or two a week.”

Swatragh took two games, including a run out against Cloughmills to get geared up for the championship with an eye on qualifying for the senior semi-finals.

“Banagher will be a big game for us. The Dungiven game won't define our year. We have the Coleraine game and then it is a winner takes all game with Banagher to get to the semi-final of the championship. If not, that junior championship becomes very competitive, which is good. At least there is competitive hurling."