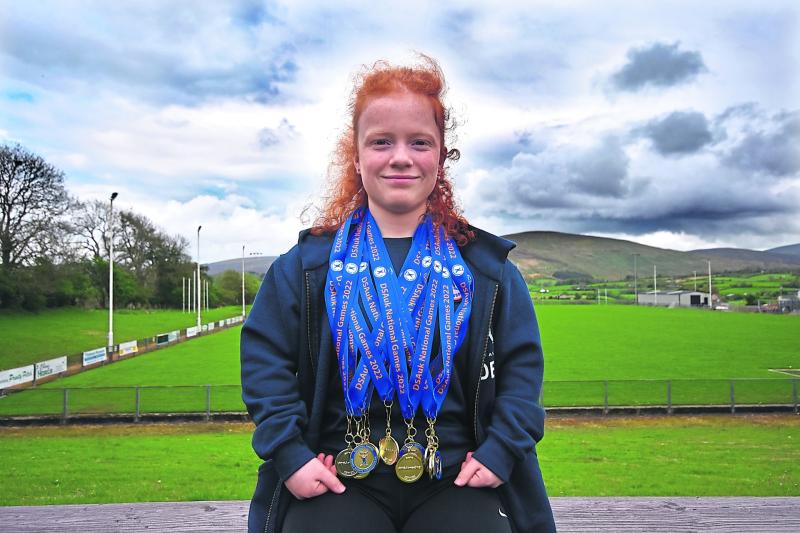 "Some people want it to happen, some wish it would happen, others make it happen."

Dearbhaile has just returned from the Dwarf Sports Association UK National Games in Birmingham with a haul of medals that leave no shadow of a doubt that she is making it happen.

Born seven weeks premature and weighing 3lbs 10oz, she has blossomed into a healthy young teenager who is loving life, loving swimming and wanting to get out there and take on the best in her category.

But the adversity and challenges that the St. Patrick's College, Dungiven student has to overcome to be the best in her field would put other often privileged competitors to shame.

Dearbhaile brought home nine gold medals and one silver medal from last weekend's National competition from both Track and Field and Swimming, seeing off competition from Germany, England, Wales and Scotland.

Her first and absolute love is swimming. She unashamedly prefers that discipline to any other and her ambition is to compete in the 2024 Paralympics in Paris.

“I have just got my classification for track and field from the paralympics association and I'm waiting on my Swim Ireland classification and once I have that I can work towards being a paralympic athlete,” she said.

“I went to swimming lessons with my primary school, St. Canice's Primary, Feeny in P4 and it was scary at the start but I just loved it.

“Now I train about eight hours a week over four days. I am part of the Limavady amateur swimming club.

“We train on a Tuesday morning at 6.30am so that's an early start before I go to school. Then I do a bit more training on my own at home as well with resistance bands and a bit of stretching work and that.

“My favourite stroke is the butterfly. I'm very good at it, it was hard to get right at the start and once it clicked it is my favourite now.”

The transfer from the security blanket of Primary school to secondary school can be daunting for any teenager, Dearbhaile is the only student in her school with dwarfism. 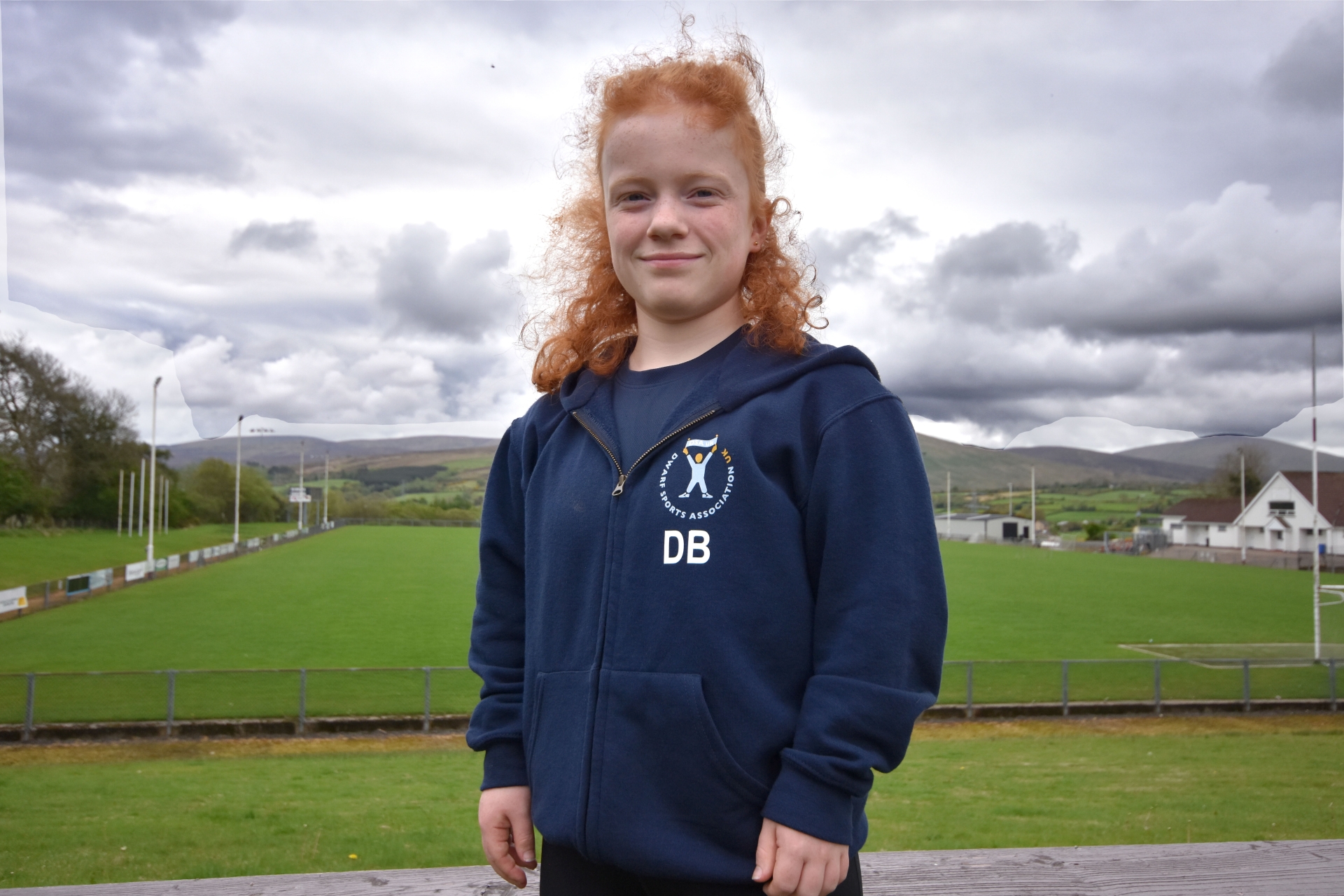 Dearbhaile Brady has aspirations to compete in the 2024 Paralympics in Paris. Photo by Mary K Burke

“I can feel a bit left out some days. Things like sports day for example. There are so many checks and things and most times I dread sports days. I find it really upsetting because I can't really compete.

“The way I feel when I can't compete at school or in my community makes me feel down and sad, because I put in the training hours too. But then I go to Birmingham once a year and I can bring home gold medal after gold medal.

“When I compete I am the best in my field, but at home I can't express to anyone how good I am, or measure myself against peers because I cannot compete. There is no setting in schools for people like me to compete here.

“I mean you look at Derry footballers there last week beating Tyrone and everyone knows how hard they train and they get to play and compete every week, but someone like me gets to compete once a year, despite having to be mentally and physically tough and fit.

“I am really training all year round for one event per year and that is hard to stay motivated for.

“It is just painful at the end of the day like – our school sports day is coming up and I am already not looking forward to it because I know I won't be able to achieve anything.

“My younger brother Matthew being in the school is really supportive. He is 12 now and in Year 8 and so I can speak to him about things that maybe I wouldn't speak to mum and dad about.

“I can say 'people were staring at me today' and things like that and he is just really good at saying just ignore them and just has my back. I'm glad to have him there in the big school too.

“My classmates are brilliant – they are always wishing me good luck and congratulating me. My form teacher Mr Barr is buzzing and laughing calling me a future Olympian.”

Dearbhaile will continue to face difficult situations but she tackles the issues head on and with her trademark smile.

“I had a weird experience just recently there. I was in a shopping centre in Derry and two girls were watching me as I went into the toilets, and they waited until I came back out and followed me around the store with their phones out smirking and giggling. They were maybe 12 years old and they were just giggling. 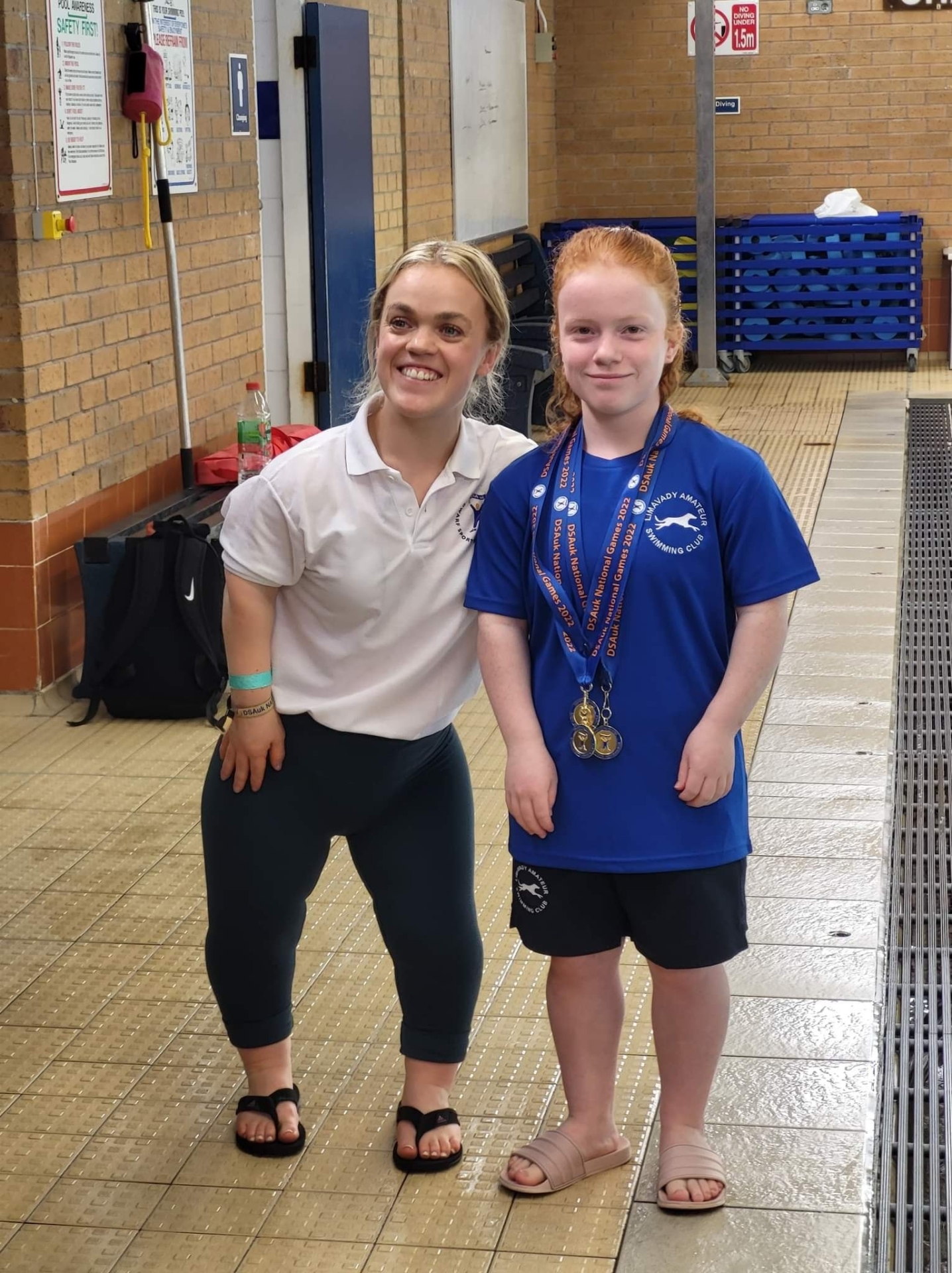 “I face these things a lot. I want to be an athlete and compete. People would say to me when I went to big school ‘isn't she so cute’ just because I'm small - but I'm not a cute child, I'm a teenager, and I'm an athlete and I want to compete and have a normal life.

“No-one stares at me when I'm competing, I'm just another competitor. When I'm in the water no one knows what size I am, I'm just swimming.”

Just two competitors from the north travelled across to Birmingham for the UK National Games, a number that Dearbhaile would like to see increased.

“I've made great friends through competing. They are in the same boat as me. They have had the same problems and they understand me well.

“If I was saying to a teacher or friend about something that happened me, they just don't understand as well as the friends I've made through competing,” she said.

“I was disappointed when I went to Birmingham that it was just two people from Northern Ireland. I was just raging. It was just me and another athlete called Jonathan McLaughlin from Belfast. We were the only two people representing our region and I just thought there would be more of us able to compete in a National Games.

“I know some people were away from it with Covid-19 but I would like to see more done for people like me to see that they can participate and they can compete and represent their region on the national stage.

“I think the government or sporting bodies in Northern Ireland could do more to look at athletes like us and give more support. I would like to see that because you know those medals came from a lot of hard work.”

There’s no doubt that more success will follow for this budding young athlete.