Kevin McIvor will travel to Turkey in July for emergency surgery 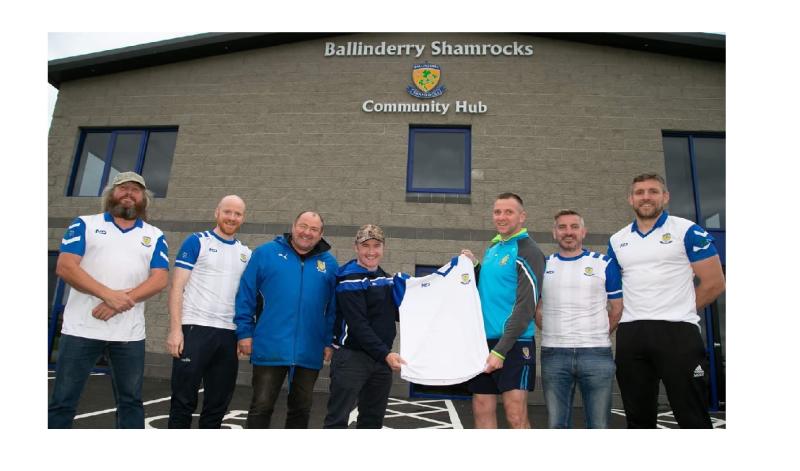 Next month marks the anniversary of Ballinderry's first All-Ireland Féile na nÓg title, which their retained the following year.
It was part of a golden age at underage level the fed into senior success and later brought the Andy Merrigan Cup over Ballinderry bridge in 2002 as All-Ireland senior champions.
In the years that passed, there was much debate to which team was better. This Friday night (7.30), brings an opportunity to settle that score as Shamrock Park hosts a novel game between the teams.
It doubles up as a fundraiser for Kevin McIvor, a defender on their 1997 winning team. Kevin has neuromuscular scoliosis, and after first being diagnosed as a teenager.
His condition continued to deteriorate, however, and came to a head at the beginning of lockdown last year, when he lost the feeling in his legs and collapsed in his garden.
After taking to social media, Kevin found a group for people living with scoliosis and was put in touch with Dr Ahmet Alany, a leading spinal surgeon from Turkey.
On an initial trip to Istanbul, Kevin was informed he had a double scoliosis, which is putting pressure on the spinal cord from his brain.
“It's going to get to a point where it is going to pull apart, and paralysis is on the cards,” said in an interview in the County Derry Post earlier this year.

Ballinderry man forced to travel to Turkey for spinal surgery

The 36-year-old has just weeks to raise enough money for the surgery.

Kevin heads back to Turkey in July to undergo emergency surgery, which will cost around £45,000 to £50,000.
Already a crowdfunding page has been setup by friend and work colleague Aidan Lavery, to help raise funds to support funds for the travel and the operation. There is £22k raised already.
A charity car wash was arranged in Ballinderry to help and a soccer tournament planned.
Some of Kevin's teammates from the Féile winning teams had been pondering over a reunion and decided to roll it all in as a fundraiser.
Friday's game will be followed by a raffle in the nearby Bridge Bar and all the players have each sold adverts for a commemorative programme.
Noel O'Neill, of Ardboe based ND Sports has also donated special retro versions of both the 1996 and 1997 U14 kits to mark the occasion.
Ballinderry won nine out of 10 Féile titles in Derry during the 1990s and going to the All-Ireland series was the annual summer holiday to some far flung corner of Ireland.
In the early part of the decade they lost in two finals, before a fancied side went out on score difference in 1995 to Ballina and Mayobridge.
In 1996, despite not being expected to do well, they went one better in Castlebar with victory over Cork giants Na Piarsaigh, with Jarlath Martin and Dominic Rocks in charge.
“We were expected to win in Derry, but nobody gave us a chance going down south,” recalls Philip Muldoon. “Martin Cassidy and Mossy (Kevin McGuckin) were big lads, but we had a very small team.
“We knew we had good players, we were fast and we had Mark McGeehan and Thomas Maynes in our forward line.”
Kevin played corner back on the 1997 winning team and after beating Foreglen in Derry, thanks to 2-11 from Thomas Maynes, they went all the way to again conquer at All-Ireland level.
“Going to Donegal, it was a strong team (with 12 of the 1996 panel still underage), but there was the feeling 'can we do this again' and low and behold, they won it is again.
“They beat a very strong Erin's Own team from Cork. I remember that particular game...they had mountains of men,” Muldoon remembers.
Size didn't matter and the smaller Ballinderry side played around them on their way to another title, beating Round Towers of Dublin in the final.
“Kevin was a battler, he was always given a man marking job and he was tough,” Muldoon adds.
“We are still very close as a group. Back then, our summers revolved around the Féile na nÓg and we still talk about it.
“Families were hiring out camper vans, booking mobile homes and knew Ballinderry had a good chance of getting 'Down South' for that weekend, from Thursday to the Sunday”
Part of the Féile tradition is the fundraising for gear, travel and any other expenses a club would ensue. Table quizzes, guess the score and raffles are all part of the lead in. And with the families involved, it added to the community buzz.
This time, there is a fundraising drive with a difference. Kevin McIvor was a warrior on the pitch and faces a tough battle off it. But the people of Ballinderry and further afield are in his corner.
Friday will bring memories, videos and photos. And every penny raise will go to support on of their own, when he needs it most.

Donations can be made on the night or online...CLICK HERE...