LIFE IN LOCKDOWN: Missing chat and company in Claudy

The north Derry village is raring to get back to some form of normality. 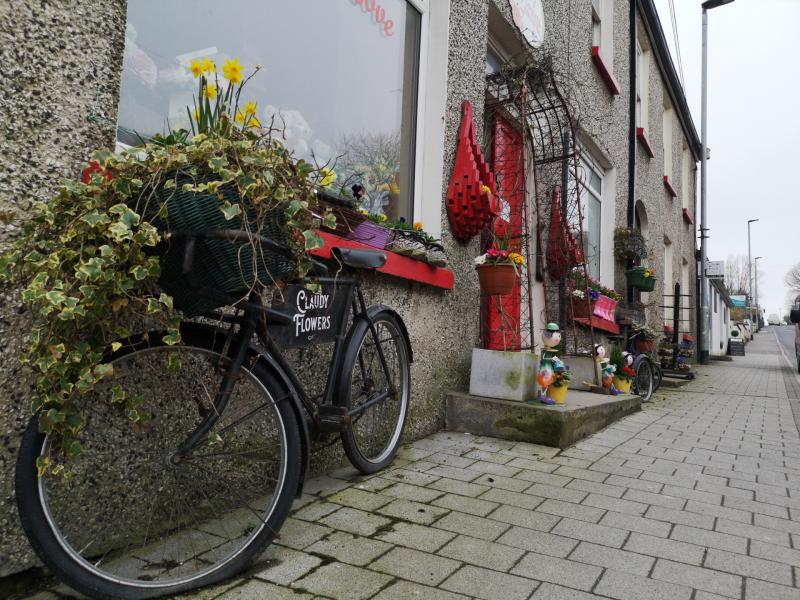 My error of judgement only becomes clear on the far side of Dernaflaw. Diggers and trucks bob over mounds of soil down the hill to my left.

Where once there were handy left turns, now sit red 'Road Closed' signs and the parked cars of construction workers.

Traffic has slowed to a crawl, its path carefully corralled by an endless row of orange cones as it snakes its way towards the Maiden City.

I should have gone through Feeny.

When I finally descend down the steep incline of Claudy's Main Street, the village is busy. The clock on Eakin's Corner towers over the street.

At some point over the last year, at approximately 1.20pm, the clock has stopped. Its stalled hands project a sad intrigue.

Above the street, the ragged remains of what may once have been a banner hang from an overhead electrical wire. A painted black bull welcomes customers to O'Kane's Meats.

In front of me, the street stretches further down the hill into the Faughan Valley. Wisps of smoke from distant houses billow into the air.

A lady rounds the corner at the crossroads, slipping on a face mask. Customers nip in and out of Centra and Spar, as if duty-bound to visit both.

I make my way down the hill, passing Macon's Bar, another of the county's watering holes sitting in solemn anticipation of a return to business. 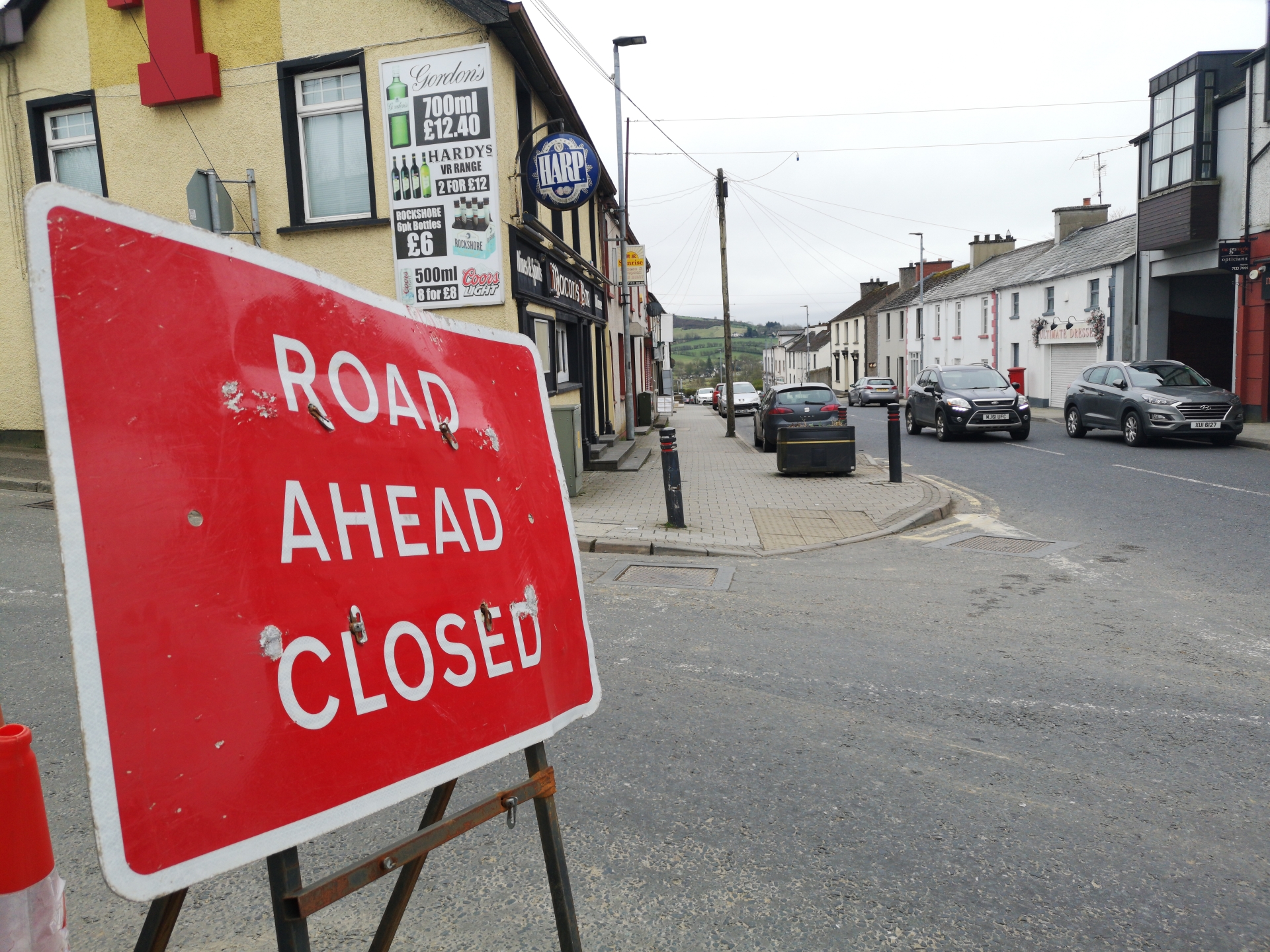 Road works are an all-too-common sight in Claudy at the minute.

An elderly woman opens her door and shuffles onto the step, peering up the hill as if waiting for someone.

Across the bridge, two black horses eye me suspiciously as I stop to take a photograph of the GAA pitch at the bottom of the hill.

They walk the boundary of the fence in tandem with me as I continue down the hill, before galloping off at speed, scattering a peacefully grazing flock of sheep in the same field.

Back in the village, there are excited voices as the pupils of St Colmcille's Primary School file out, parents ushering them into cars as the lollipop man patrols the pedestrian crossing.

P1 to P3 have just finished their first fortnight back in the classroom, with the older children following suit yesterday. Excited voices happy to be back.

New homes are being built next to the school, with a sign proclaiming a site across the road has also been procured.

The brakes of an ageing Nissan Micra scream in protest as the line of school traffic inches its way back down the hill through the village.

Behind a clear plastic screen in Eleanor's cafe, Irene McElhinney is missing the unpredictable buzz of company.

“I'm a chatty wee doll. I like to meet people, have them in for their tea or coffee and hear what's going on with them,” she tells me.

“Whenever the mobile homes were going and the houses in Donegal, they would have been calling back and forth, or the people across in the garage, but obviously those things have changed.

“We have been open the whole way through. You find if you don't open for customers that have been coming all year, you feel you're letting them down.” 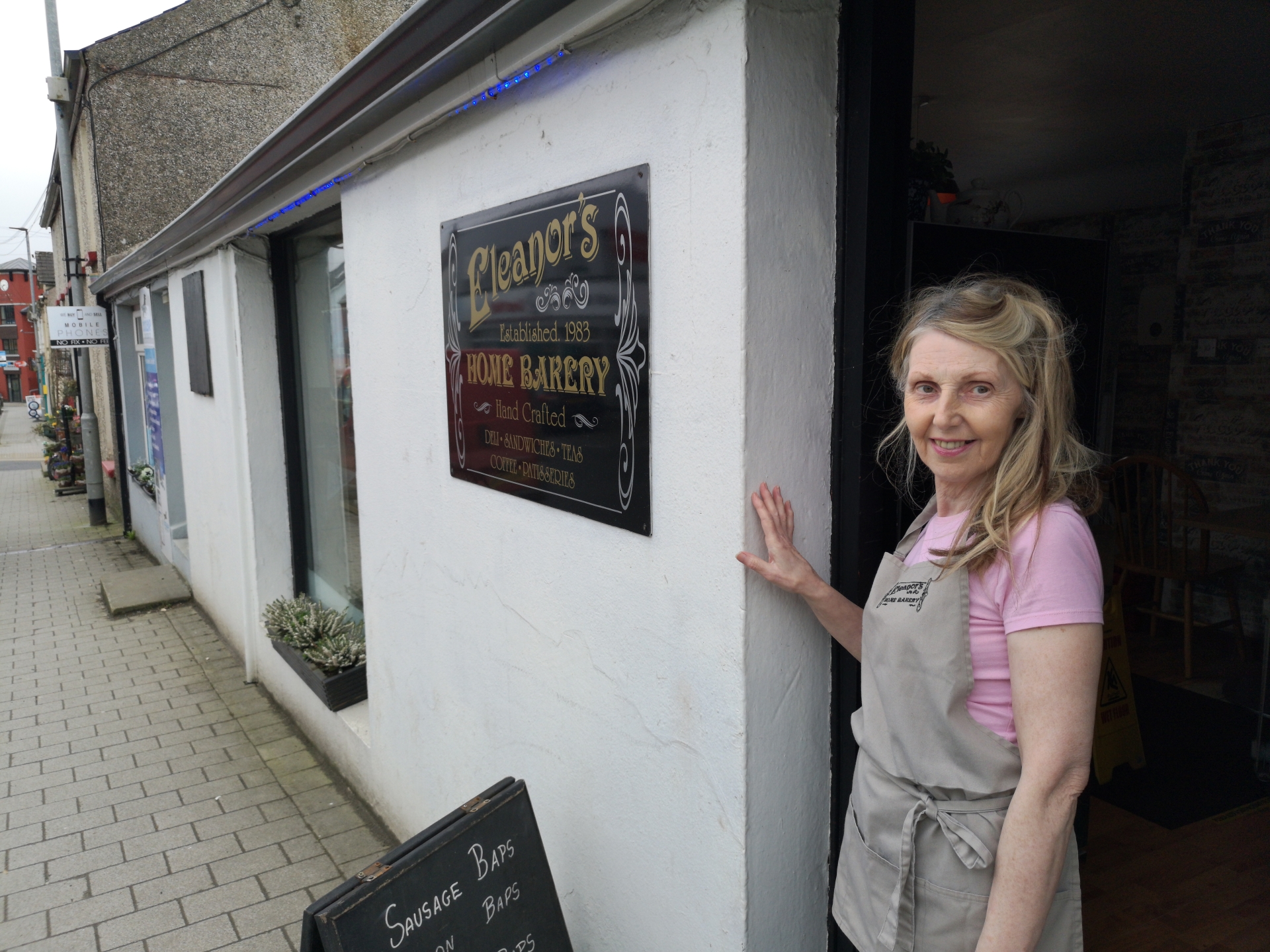 CHATTY: Irene McElhinney is missing the buzz of a full bakery.

People have got used to Covid restrictions after a year of altering their behaviour, but despite the ongoing vaccination programme, there is still an element of fear among more elderly residents.

“There are a few older ones that would only come in here and maybe wouldn't go to supermarkets, because of the guidelines and the rules,” says Irene.

“Because this is a home bakery, it's naturally that wee bit quieter, but with the goings on, but you did have the social aspect here where they would have come in and had their tea.

“We know it's not going to be the same, but you try and keep on smiling and keep going with what we have. Trade is different during lockdowns.

“The pandemic is like a scar, it has left its mark in a way. It's the simple things that we've always done that we miss.”

Further down the hill, Sally McEleney is more bullish about the situation. The local florist, originally from Derry City, offers a blunt answer when I ask how things have been.

“The latest lockdown has been much worse than the first for the simple reason that I don't think small businesses are being looked after. 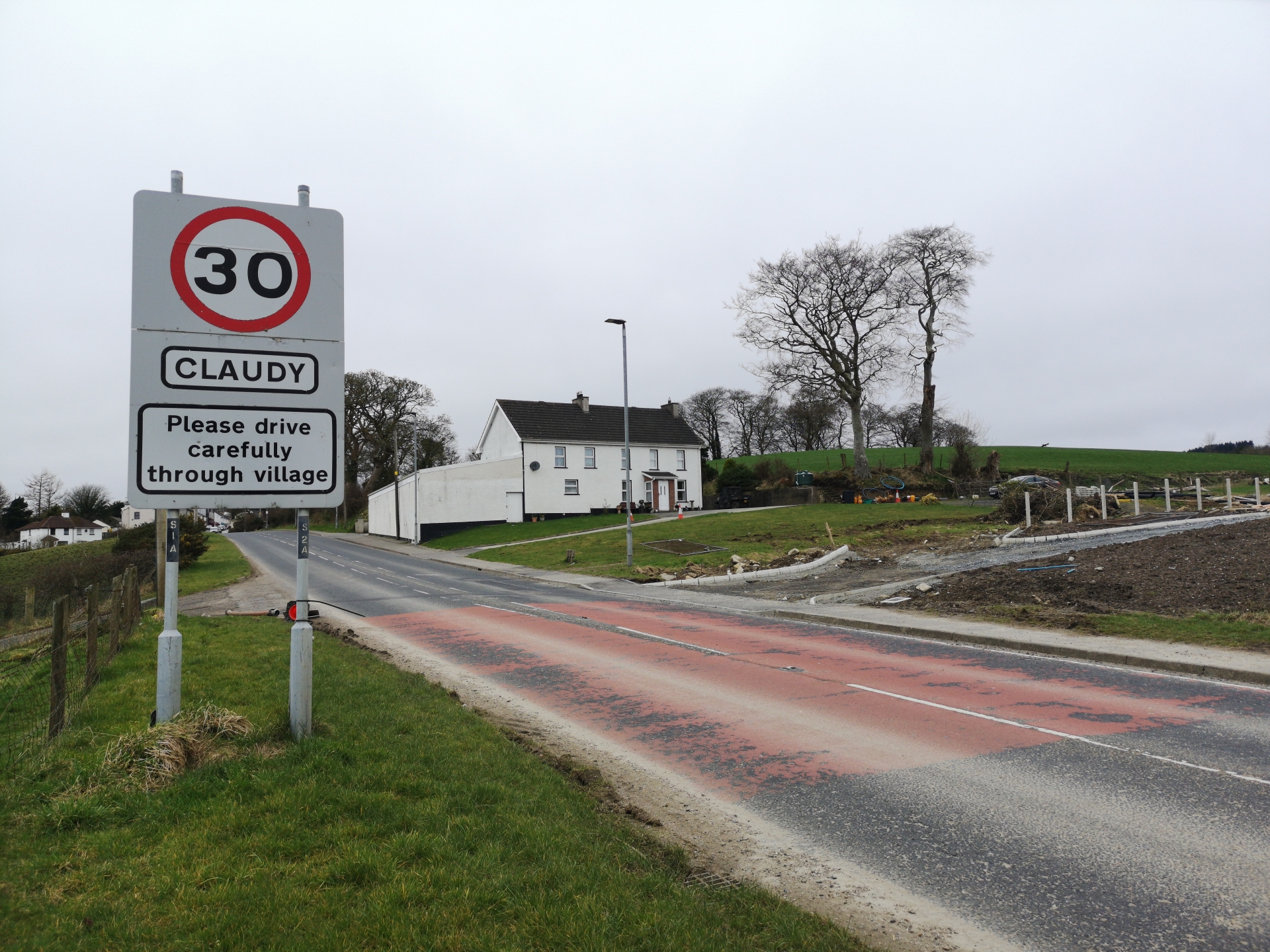 “When you think you can go into Tesco, or Home Bargains and all around, people are bumper to bumper on top of one another, it's just horrendous.

“If I ordered something in Argos now, I can collect it in Sainsbury's café, and people are queued up to get their click and collect, but you can' t come in that door to me.

“I can only take phone calls and deliver. I'm in cleaning up today, but I can't let anyone through the door.”

The restrictions have also meant the usual upturn in business from Valentine's Day and Mothers' Day has been stifled.

“I had to switch my phone off because I just couldn't cope with the demand, being deliveries only,” she tells me.

“I missed all the last minute customers I normally would have had for Mother's Day and Valentine's Day.

“I can safely say it's not worth my while opening, but I love my work and that's what brings me in. I didn't want to let any of my regular customers down.”

Like Irene, the absence of people and company has taken its toll on Sally.

“The people in Claudy are lovely, they really take to you, and you don't want to let them down. With it being a village, they're all very close,” she says.

“I'm really looking forward to having my customers coming in the door again and having a nice chat and getting all my wee plants outside for the Spring time.

“As well as that, they're very faithful and they support local. It's very important, but they can't get a chance to support me at the minute.” 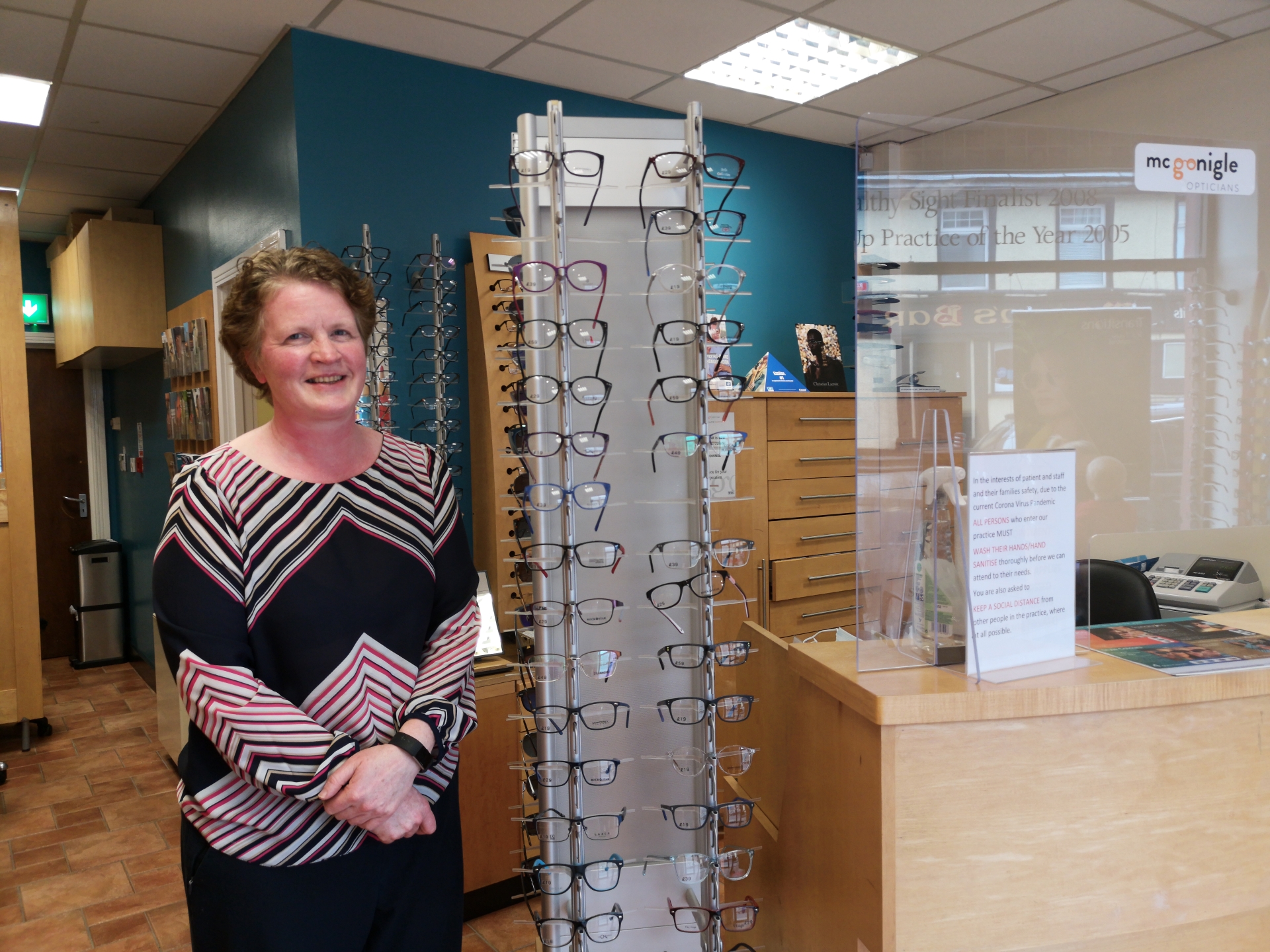 Maureen McGonigle is upbeat about the future.

Maureen McGonigle, from McGonigle's Opticians, says there has been much more activity around the village recently.

"Although people are continuing to try and keep themselves and families safe they are trying to get on with a relatively ‘normal’ life whilst still respecting the Covid 19 restrictions," she says.

"As with all optometry practices in Northern Ireland we were o it able to see emergency patients in the first lockdown but  since the end of June 20 we are also able to see patients for ‘essential’ services."

Maureen says the practice had to work to put some of their patients at ease, with some concern over the close contact aspect of the situation.

"We have found that particularly for those patients who were ‘shielding’ the appointment at our practice may be their first medical appointment," she says.

"Although initially anxious about being out, they are very reassured to see  that we have all the necessary safety measures in place to ensure their continued safety."

As the situation eases, Maureen already has one eye on family gatherings.

"From a personal point of view I am really looking forward to regaining our family connections and being able to gather as a family to celebrate important family events such as birthdays," she tells me. 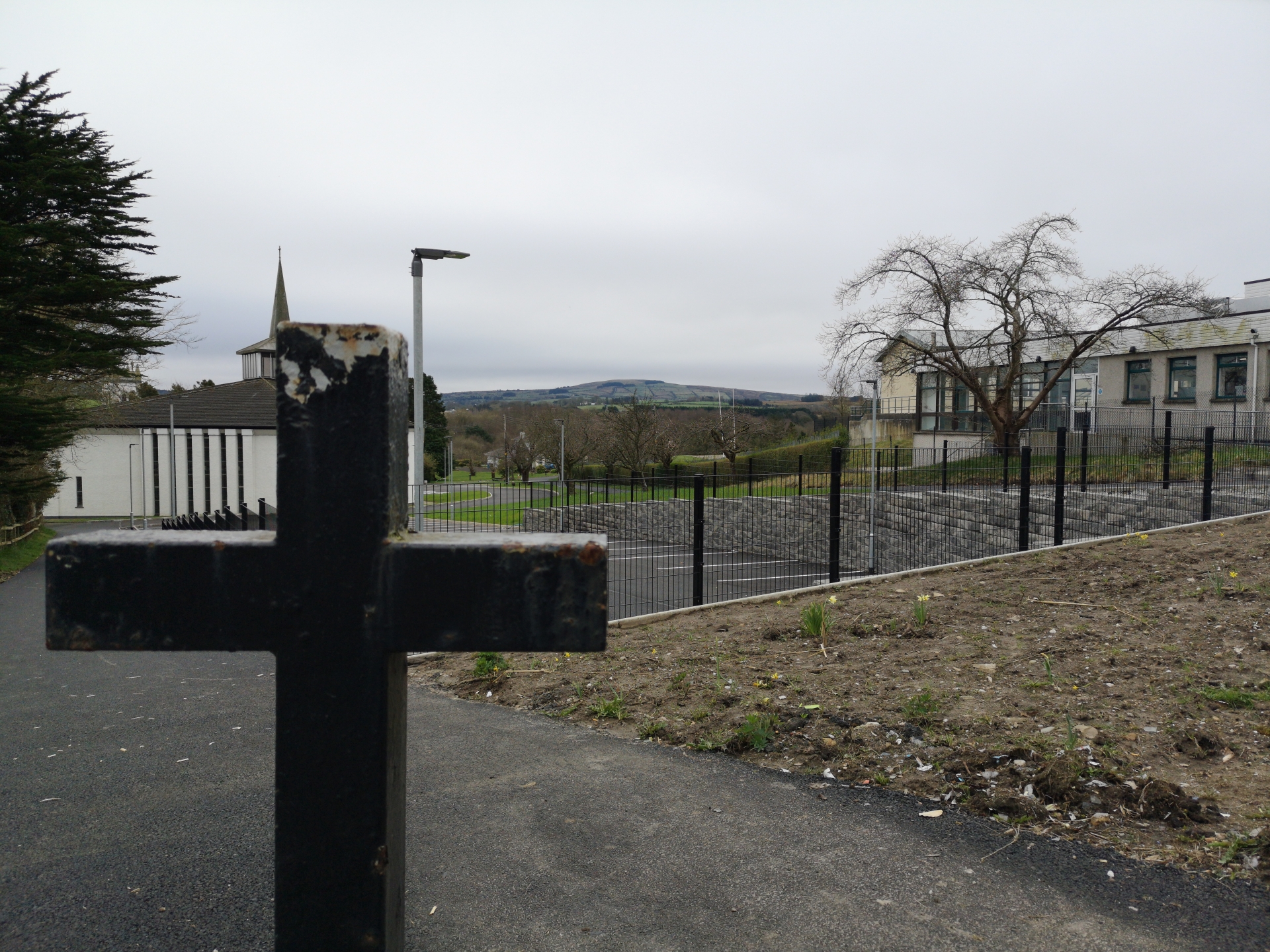 Praying for an end to lockdown at the local chapel.

There is plenty of chat from the people of Claudy, but like everywhere else, an unspoken plea for help is weaved into their conversation.

People have dug in hard over the last year, but the hole at this stage is vast, the climb out an almost vertical scramble on loose earth.

They want it done. Over with. Consigned to history.

I point the car downhill and head home through Feeny.

Even during a pandemic, no one wants to be sitting in traffic on the A6.